If you were to ask any reasonable person (or reasonable physicist) how quantum mechanics works, 9 out of 10 times he/she would probably give you the same answer: magic. Yes, the field of quantum physics is known far and wide across academia as being both pretty difficult (lots of math) and pretty confusing (it just seems like it makes stuff up as it goes). However, despite all the tedium and wizardry that surrounds quantum mechanics, if you look hard enough at the many applications that the science has to offer to other fields, you may quickly come to find that it is also pretty dang awesome. Indeed, even the field of neuroscience has experienced some cross over with quantum physics in an attempt to explain many of the mysteries of the mind. But, what specific oddities about the brain are so opaque that they would need something as complex as physics’ black magic to explain them?

Let’s consider for a second some of the basic principles behind synaptic plasticity in neurons. As any molecular or cognitive neuroscientist will tell you that the plastic nature of connections in the brain is great, mainly because it lets your neurons tweak and strength certain essential inputs and outputs, and remove (or “prune”) the ones that are not so essential. If they were to go on, they would probably also tell you that neurons can select the neuron-to-neuron connections that they preserve and remove based on the strength of the signals that are being conducted through all those different connections. 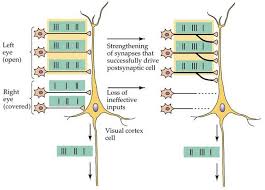 Basic model of Hebbian learning/synaptic plasticity: Cells that signal together create strong connections and stabilize; cells that signal weakly do not stabilize and are eventually removed

In short (and to quote Donald Hebb), “neurons that fire together, wire together” and all other signals/connections fade away over time. This all seems pretty intuitive, of course neurons want to talk with other neurons from which they can actually get a decent signal! The exact mechanism by which this occurs, however, is not altogether intuitive. Indeed, since this form of wiring is so important in the brain for functions such as learning, memory and general cell-to-cell communication, many neuroscientists are left asking just what motivates it. More importantly though, if this event is essential to learning and memory formation in the brain, do you have any control over how your brain decides when to fire and what to wire to?

Quantum theorists have attempted to explain this “firing and wiring” effect, along with the influence that consciousness holds over what stays and what goes, by citing the quantum zeno effect, a bizarre phenomenon first observed by particle physicists who were attempting to observe the spontaneous decay of uranium. During their experiment, these physicists would continuously make observations of the radioactive uranium particles to observe the degradation. Amazingly, the researchers soon began to realize that whenever they made continuous observations of the uranium, it would cease to decay and instead appeared to “freeze” itself in a stable state! To ensure that they were all not crazy (or suffering some form of radiation poisoning), the initial research team shared these results with several colleagues who replicated them and observed the exact same thing! It is now actually a relatively accepted fact in the realm of quantum mechanics that rapid repeated measures of a quantal system will slow the fluctuation between quantal states of any species within that system. Quite literally, this phenomenon seems to validate the old saying that “a watched pot never boils”!

Do neurons, per say, utilize quantum locking as a defensive mechanism while stalking intergalactic prey, or perhaps just to remain in one specific state for long periods of time (had to give a shout out to the Doctor Who fans in this article)?

But how does all this “quantum locking” come back to neuroscience, and to cells firing and wiring together for that matter? According to a new theory floating around that combines both quantum mechanics and cognitive neuroscience, the determination of neural circuit formation depends entirely on the quantum zeno effect. The way the effect is achieved in the brain isn’t through being camera shy like uranium, but instead through simply being able to focus one’s attention. As the theory states, the mental act of focusing attention can stabilize the brain circuits that are associated with whatever one is focusing on. So, if you were to receive a prick on your finger and you were then to focus all your attention on it, the current state of your brain at the time would be maintained in order to allow you to interpret the signaling associated with that event (i.e. feeling pain). Thus, in terms of promoting Hebbian learning: the more you are able to direct your attention to specific stimuli, the more readily all the neurons involved in the current response to that stimuli will be able to fire and synapse to one another (thus promoting the strengthening and solidifying of specific neural circuits)! While this model is definitely not without its holes, the quantum zeno hypothesis does provide a very interesting way to consider how the brain may handle bouts of conscious learning (or self-directed plasticity) and is able to stabilize certain synaptic pathways. If anything, it hopefully provides us with a more magical interpretation of the brain and how it completes its many whimsical tasks!

Does Quantum Mechanics Play a Non-trivial Role in Life? – Biosystems

Quantum Physics in neuroscience and psychology: a neurophysical model of mind-brain interaction – The Philosophical Transactions of the Royal Society

What’s attention got to do with it? Quantum physics of the brain in mediation – Brains on Purpose

3 Comments on How You Can Make Quantum Mechanics Actually Work (for your Brain)!