Welcome to the Graduate Music Society (“GMS”) at Boston University. We are the student organization of the Department of Musicology & Ethnomusicology. See below for the latest updates from our students and department. To learn a little more about the organization, see About Us. Have any questions? Contact us here.

“Knights of the Dining Room Table: The quest for a medieval life in the English Victorian home” Michelle Wilson, Dept of Art history, BU

Below are the abstracts for the 7th Annual Graduate Student Conference: "Tracing the Goth/ic: Viewing Culture through the Lens of Barbarity."

END_OF_DOCUMENT_TOKEN_TO_BE_REPLACED

We are pleased to welcome Renée Bergland, Professor of English, Simmons College, as our keynote speaker for the 7th Annual Graduate Student Conference. Bergland earned her PhD in English and Comparative Literature from Columbia University in 1997. She has taught at the University of the District of Columbia, Marymount University, the University of New Hampshire, Boston University and Dartmouth College, before coming to Simmons in 1999. At Simmons, Bergland teaches a wide range of courses in nineteenth and twentieth-century American Literature. She is particularly interested in Native American Studies, Cultural Studies, and Gender Studies. She also teaches in the Graduate Consortium in Women's and Gender Studies, and holds a research appointment in Studies of Women, Gender, and Sexuality at Harvard University. Professor Berlgand's work tends to span broad expanses of time, to offer slightly startling juxtapositions, to rely on close readings of both literary and historical texts, and to explicitly advocate a dialogic ethics of analysis, while trying to connect the past to the present. Her writing always reflects my commitments to transnational, transhistorical, cross-cultural analysis. (Read her full bio here)

Because of the interdisciplinary nature of this conference, we are looking forward to Professor Bergland's contribution as someone whose work often attempts to think outside disciplinary bounds.

(also see the Call for Papers)

The Graduate Music Society of the Department of Musicology and Ethnomusicology at Boston University would like to invite submissions for its 7th Annual Graduate Student Conference. This interdisciplinary conference will showcase the lens that ‘Gothic’ affords the humanities to view both themselves and each other.  From the beautiful to the ridiculous, Gothic has meant many things over the past millennium.  The aesthetic lens of the Gothic in 1853 was characterized by John Ruskin as Savageness, Changefulness, Naturalism, Grotesqueness, Rigidity, and Redundance.  How, a century and a half later, do we use a ‘Gothic’ lens to view the world, past and present?  We encourage papers from across discipline to explore the Gothic, with topics that could include (but not limited to) specific references to a Gothic aesthetic or topics more broadly connected to ideas of barbarity, such as otherness, deviance, exoticism, or colonialism. The format of the paper sessions will be in a seminar style, thus we ask that papers be pre-circulated two weeks in advance of the conference. Presenters will have a chance to briefly summarize their work with most of the session time devoted to discussion of the papers. The conference will take place February 8, 2014 at Boston University, with pre-conference activities the evening before. Abstracts of 250 words are due by Dec. 6 to Jeannette Jones, jonesj@bu.edu. Notifications of acceptances will be sent by Dec. 30

Several of our members will be participating in the upcoming national meeting of the American Musicological Society and Society for Ethnomusicology.

Jeannette Jones will present “Lyrics in the Air: The Role of Music Videos in Deaf Culture”, at a session titled “Music and Disability on Screen” Thursday November 7th from 8-11:00 pm. She will also be serving as student representative to the AMS Council for the New England Chapter.

Robert Crowe, soprano, will give a concert, "Carissimi to Croft: The Influence of the Italian Solo Motet in English Sacred Solo Music of the Restoration," Friday, November 8th, 2-3:30pm, Trinity Episcopal Cathedral, 328 Sixth Avenue. Robert will be accompanied by Peter Sykes, organo portative, and Victor Coelho, theorbo, both of Boston University.

Andrea Lieberherr Douglass will present “The performance of cultural tourism in the Appenzell, Switzerland”  in the session called “Challenges of Cultural Heritage” on Thursday, November 14th at 10:45-12:15 .

Karl Haas will present “Music and Matter, Time and Space: Considerations of the Materiality of a West African Performance Tradition” at 3:15 pm on Thursday, November 14th.

Ulrike Prager will present "When Loss Sounds: Forced Migration and the New German Sonic Homeland" at 8:30 am on Friday, November 15th.

Amanda Daly Berman is chairing the Celtic Music SIG (Special Interest Group) and has been elected to the SEM Student Union as a Member-at-Large.

Doctoral student Andrea Lieberherr Douglass (Ethnomusicology) reports from Switzerland with her family where she is doing additional fieldwork for her dissertation. 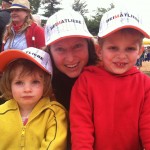 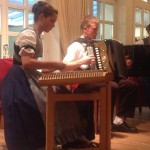 I'm in Switzerland with my family for six weeks this summer to conduct additional field research. At the moment we are staying three weeks in the Appenzell area of Switzerland,  in the same small town we lived in last year for seven months. Then we are staying for three weeks in the adjacent valley, the Toggenburg. The Appenzell and the Toggenburg comprise the Alpstein, the geographic area where the Streichmusik I'm studying is located. Mostly I am here conducting interviews with performers, politicians, cultural organizers and tourist bureaus. Through the Zentrum für Appenzellische Volksmusik (Center for Appenzeller Volksmusik) my husband and I are participating in some rehearsals and performances of Streichmusik. I'm also attending alpine festivals that include music and dance, performances in restaurants and concerts as well as  musical and theatrical celebrations of the 500 year anniversary of Appenzell joining Switzerland.

Doctoral student Karl Haas (Ethnomusicology) is spending 12 weeks in Ghana this summer doing fieldwork for his dissertation, courtesy of a predoctoral grant he received from the West African Research Association. Karl is researching drumming in tribes of Ghana.

Pictured below are pictures of of Karl and his research assistant, Fatawu, scenes from Accra and Tamale, and a performance of Dikala. Karl explains, "The Dikala involves drumming, singing, and the playing of metal clappers called "sabaani". The music is for when VIPs, such as chiefs or political dignitaries, die, and the sabaani are played by blacksmiths. In Morocco, Tunisia, and Algeria, descendants of sub-Saharan slaves play  trance music involving these metal clappers, but their use in West Africa has all but disappeared. This may actually be the only place they are still used. Picture from Tamale, Ghana." 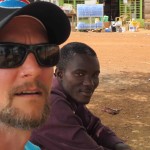 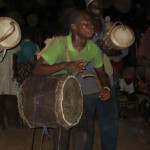 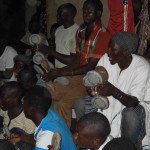 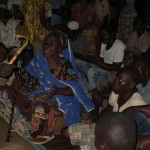 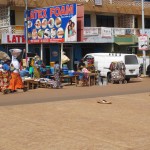 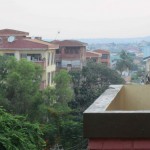 Many of us are off traveling this summer for research and field work. This is the first in a series profiling students' summer work.

At the beginning of June, doctoral student (historical musicology) Julia O'Toole went to Prague for a week-long trip into the Dvořák archives at the Czech Museum of Music. 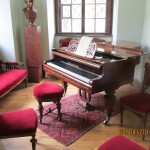 I was in Prague June 1-8, working with manuscripts and archival materials surrounding Dvořák’s comic opera Šelma Sedlák.The opera has been virtually unperformed since late 19th century with one or two exceptions, yet it is a quality piece with a lot to offer. I hope to discover through reception records, meetings with key Dvořák scholars in Prague, etc.  why it is no longer done, and attempt to return it to the standard repertoire.

The main river on which Prague is built had surpassed its banks considerably while I was there, due to 12+ days of heavy rains. In 2002, similar flooding occurred, causing great devastation. This time, however, the city was prepared. Over 100 animals from the zoo were moved to higher ground. The river was braced with great metal barriers to help maintain its banks, and sandbagging could be seen throughout Old Town. A state of emergency was declared Sunday night eight hours after arriving in Prague. The Czech Museum of Music was closed indefinitely.

In spite of all of that, all of our appointments were kept, all materials viewed, and over 3200 pictures of scores, promotional material, reviews, etc. made it back to Boston. The summer will be spent doing a lot of translating from Czech.