This post was written by current student Hannah Spiegelman. Read more of her work here.

Happy Halloween season, fellow gastronauts! Many assume that Halloween’s food connections start at candy and end at pumpkins, but I like to dispel that belief. This season, I created a handful of spooky-themed ice cream flavors inspired by history and literature. If you aren’t familiar with my work, I have an ice cream concept called A Sweet History (@asweethistory) where I create ice cream/sorbets/and other frozen-focused desserts whose backstories reside in history, art, etc. I also do local small commissions from time to time (if you are interested email me at asweethistory@gmail.com)! Enjoy my favorite from my Halloween series below and let me know what frightening flavors I should make next year! 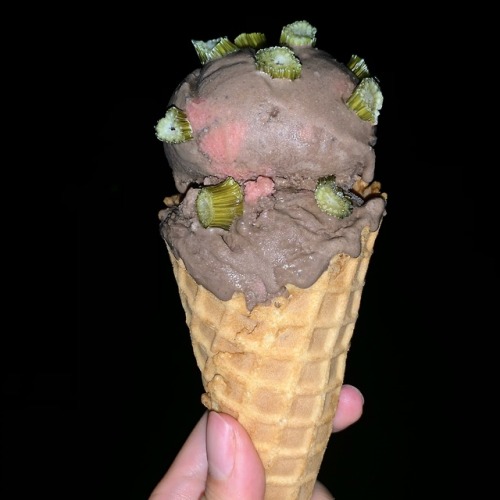 The year is 1618, also known as the year without a summer. The year prior, Mount Tambora (in modern-day Indonesia) erupted, setting off climate abnormalities throughout the northern hemisphere. In Switzerland, it was a rainy and cold summer. Low temperatures caused a dam to freeze. But this didn’t stop Mary Wollstonecraft Goodwin, her soon-to-be husband Percy Shelley, and her step-sister Claire Clairmount from joining Lord Byron, the renowned poet, at a rented villa on lake Geneva.

Mary, daughter of feminist writer Mary Wollstonecraft, had met the already married poet Percy when she was 16 years old. He and his wife were estranged, so he spent much of his time with the young aspiring writer. Mary fell deeply in love and by the time they summered in Switzerland, she had supposedly lost her virginity in a graveyard; had a premature baby, who died; watched Percy have an affair with Claire; and struggled financially since her father did not approve of Percy despite his beliefs of free love.

The trio arrived in Switzerland in May 1816, but soon realized they had to spend the majority of their time inside due to the weather. A possible liquid opium-driven orgy led the group, which now included Lord Byron’s personal physician, to recite German ghost stories. Then, one night, Byron had the idea for everyone to create their own ghost story to share. Mary did not want to disappoint her companions and she passed for many nights following. After an evening discussion of galvanism, she dreamt of what would become her most famous work. And what was meant to be a short story turned into the novel, “Frankenstein; or, the Modern Prometheus.”

The inspiration for the name Frankenstein most likely came from the Frankenstein castle in Darmstadt, Germany, where centuries before an alchemist claimed to create an “elixir of life.” Frankenstein literally translates to stone of the Franks, a Germanic group. Mary’s subtitle alludes to one of the book’s main themes: bringing something new into the world only to be afraid of it. In mythology Prometheus brought fire to humans hidden in a fennel stalk. In Mary’s novel, Dr. Frankenstein reanimates pieced-together body parts into a human form, but doesn’t know how to control his own creation.

Since 19th century society worried about controlling women, Mary’s name wasn’t on the first edition of “Frankenstein,” published when Mary was only 18 years old. Five years later, the second edition, published in two parts, gave her full credit. And on Halloween of 1831, a “popular” edition was published, in which Mary revised to be less controversial. This edition is what we all read today, veiling the political and social discourse Mary embedded into her works. Without her consent, her work began to be adapted by theaters, and pop-culture today proves the story has been blown-out and distorted.

Despite the deaths of many close to her including Percy the years following the publication of “Frankenstein,” Mary continued to write novels, essays, biographies, book reviews, and articles. While Mary worked to publish her late husband’s works, elevating him within the literary cannon, her own career was seen as a hobby, causing her to struggle financially. Since her acclaimed first novel was originally published anonymously and began with a forward by Percy, critics believed that he was the writer for surely an eighteen year old could not write such prose. To these readers’ chagrin, a late night dream on a frigid summer night sparked one of the greatest gothic novels written by the foremother of science fiction.