Anywhere an ion encounters a neutral atom charge exchange can occur. Within the heliosphere, flowing plasma in the solar wind routinely encounters environments of dense neutrals surrounding comets, moons, and planets. In these regions, high charge state heavy ions from the solar wind charge exchange with neutrals from the body’s exosphere. One sample interaction between a high charge state Oxygen ion and neutral Hydrogen is shown in the figure below.

This charge exchange interaction described by the equation below:

where the asterisk denotes that O6+* is in an excited state. In this interaction an electron is transferred from the neutral hydrogen to the high charge state ion in an excited state. The newly acquired electron rapidly transitions to a lower energy state, releasing a soft X-ray photon. Soft X-ray emissions have been observed from a variety of charge states and ions in the solar wind (e.g., C VI, O VII, O VIII, Ne IX, Mg XI, Si XIII, and Si XIV [Snowden et al., 2004; Fujimoto et al., 2007; Carter and Sembay, 2008; Carter et al., 2010; Ezoe et al., 2010]) with energies from 0.1-2.0 keV. 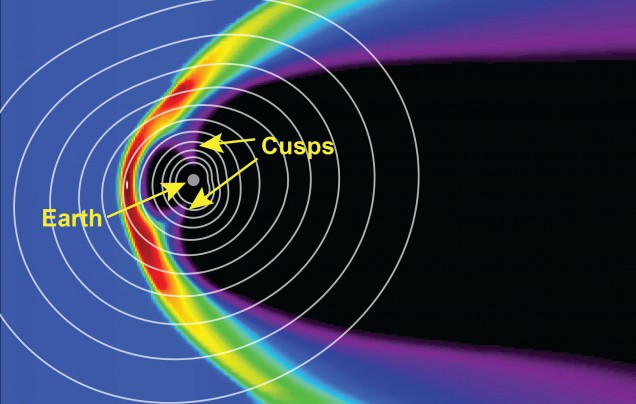 The neutral model (white contours) is from Bailey and Gruntman [2011] while the plasma density (color scale) is from a multifluid global magnetohydrodynamics model courtesy of D. Welling.

A lecture aimed at a technical audience with the goal of providing an overview and history of soft X-ray imaging for magnetospheric physics was presented from the online Magnetosphere Seminars series. The video is included below.