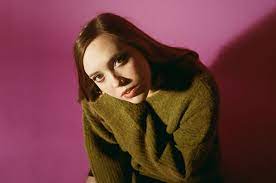 The energy outside Boston’s House of Blues was electric as crowds of fans lined up on November 6th to see Indie rock singer/songwriter Soccer Mommy on tour following the release of her latest album, “Sometimes, Forever.”

Rows of stompers and black combat boots covered the streets of Fenway as fans enjoyed the unusually warm November evening, the sky illuminated by the full moon. “The weather is perfect. We have been waiting for two hours now, but it’s totally worth it for a spot close to the stage,” said Valentina, a fan waiting in line. “The new album sounds kind of haunted in the best way, the perfect show for the lunar eclipse and Scorpio season,” she said.

The album “Sometimes, Forever,” produced by electronic sound designer, Daniel Lopatin, transitions away from the melancholy and soft rock of Soccer Mommy’s 2020 album “Color Theory” and moves into a more raw, experimental body of work. The studio album plays with Soccer Mommy’s clever lyricism and Lopatin’s signature atmospheric, IDM-inspired production. Going into the concert, I was particularly curious to see how these electronic, soft grunge mixes would play out in a live music setting.

The show started at 8:03 p.m. with opener Lightning Bug – a New York-based rock band- setting the pace with some light shoegaze interpolated with powerful guitar solos and haunting vocals. Vocalist Audry Kang kicked off the performance with the mellow, yet inquisitive opener to the

band’s 2021 studio full-length project, “The Color of the Sky.” The music switched from slowcore to psychedelic rock during songs like “The Return” as the lead guitarist and drummer worked to juxtapose Kang’s vocals with deep baselines and groovy snares.

Halfway through the opening act, Lightning Bug announced that this would be their last performance on Soccer Mommy’s America tour. “I’m starting to lose my voice,” said Kang mid-performance, laughing. As the U.S. leg of Soccer Mommy’s tour draws to an end, a decline in energy was visible in Lightning Bug’s performance as songs like “The Right Thing Is Hard To Do” didn’t quite carry the same powerful delivery as the studio version, with the lyrics often drowned out by the instrumentals.

Shortly after an intermission of CharlieXCX and an Avril Lavigne sing-along that revived the crowd, Soccer Mommy took the stage. Appearing from a cloud of ultramarine smoke, she and her band got right into the music.

The first two songs were played in the order of the studio album tracklist. “Bones” revisits some of the soft rock on her previous record with punchier drums and an instrumental segment at the end. The futuristic “With U” is played next, where Daniel Lopatin’s influence is seen heavily in the spacy, textured production. Rodrigo -who was on keys- replicated that energy through captivating synths coupled with a kaleidoscope of shifting patterns built into the set design.

Just after the performance of “With U,” she introduced her band and dove straight into playing “Circle the Drain,” followed by “Shotgun,” two of her most popular songs. I thought the live instrumentals gave the otherwise mellow “Circle the Drain” a new sense of energy, while “Shotgun’s” witty lyricism and catchy beat had the entire crowd singing along.

Though Soccer Mommy only addressed the crowd a few times throughout the show, her stage presence was definitely felt. Towards the end of the set, she gestured to a fan in the lower mezzanine holding a sign that read “I need Scorpio Rising” and said “this one’s for you,” as she played the song, a tribute to her birth chart.

The show was set to end at 10:45 with “Yellow is the Color of her Eyes,” a heartbreaking soft-rock ballad from “Color Theory.” Soccer Mommy revisits the song in her live performance perhaps from a “Sometimes, Forever” grunge lens with heavier drums and a stage-commanding guitar solo.

Soccer Mommy and the band took their bow and exit only to be met with continuous cries for an encore. A few minutes later they returned to say “We came back because we love you,” and performed “Don’t ask me” followed by “Your Dog”, a fan favorite and a scream-along. The closer brought the entire room together and ended the evening on a high note.

While the show was paced slow at times and the hour-long intermission between sets stretched the evening thin, the performance, both from Soccer Mommy and her band was energetic, captivating and the perfect amount of spooky, fitting for the lunar eclipse.