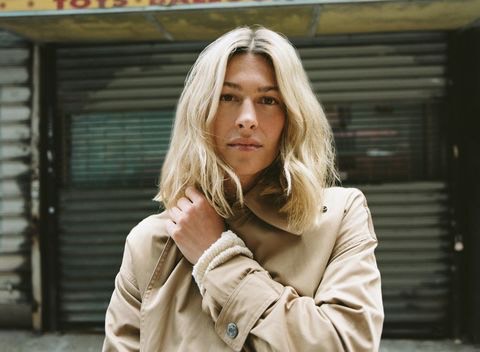 Doing a show in Boston for the first time is a daunting task for any artist, especially when that concert is completely sold out, but Australian singer-songwriter Indigo Sparke rose above and beyond the occasion on Thursday, September 24th. Opening for The National at Roadrunner, Indigo and her fellow band members stunned with a selection of songs from her forthcoming studio album, “Hysteria,” produced by The National’s own Aaron Dessner. Equal parts haunting and healing, Sparke’s performance created a tender sense of community that carried over well into the rest of the night.

From the moment she came out on stage, Indigo Sparke possessed a remarkably calm stage presence, even in the face of a packed-to-capacity music venue. Through tracks such as “Why Do You Lie,” Indigo dove into a sonic range of complicated emotions, fluctuating between serenity and fury effortlessly. Sparke’s subdued yet powerful vocals held her audience in rapt attention, all the while underscoring the somber nature of her lyrics.

Indigo Sparke’s band also matched her energy wonderfully, providing nuanced guitar work, percussion, and even backing vocals from time to time. Working together with minimal communication, the group conveyed a level of comfort with each other that was heartwarming to see. On the as of yet unreleased song “Burn,” Indigo and the band harmonized beautifully on the lyric “I don’t wanna talk about it,” allowing a singular reflection to unfold into a moment of collective support. While more interactions amongst the group like this one could have been interesting, their ability to perform as a unit near wordlessly was still something to admire.

A particular highlight of the show came when Aaron Dessner joined Indigo on stage, playing her new single “Hysteria” alongside her. Being able to watch the translation of a musical coalition from production to performance made this an unforgettable moment of musical unity. This bond would be recreated later on when Indigo accompanied The National on their song “Rylan.” The crowd was audibly excited to see Indigo upon her return to the stage, showing just how strong of an impression she had made earlier.

The only moment where the show’s serene atmosphere faltered, although not any fault of the performers, arrived at the very end of Indigo Sparke’s set. As Indigo closed out with “Everything Everything,” a quieter track off her debut album, there seemed to be an abrupt disconnect between what was happening on stage and what was happening in the concert hall. Standing in the audience, it became difficult to hear the song’s lyrics over the incessant chatter that quickly swept through Roadrunner, and it seemed as though some buzzier attendees had completely checked out and were just waiting for the next act to begin. It is quite unfortunate that this occurred, for it shattered the trance that Indigo and her band had worked so hard to cast over the venue up until that point.

Despite this, Indigo Sparke was still able to forge an environment that was intimate and inviting, and one that made quite an impact on this reviewer. Indigo’s songs are a celebration of survival, and if her debut live performance in Boston and imminent record release are any indication of things to come, then it won’t be long before more and more people find themselves resonating with the affectionate world she is crafting with her music.