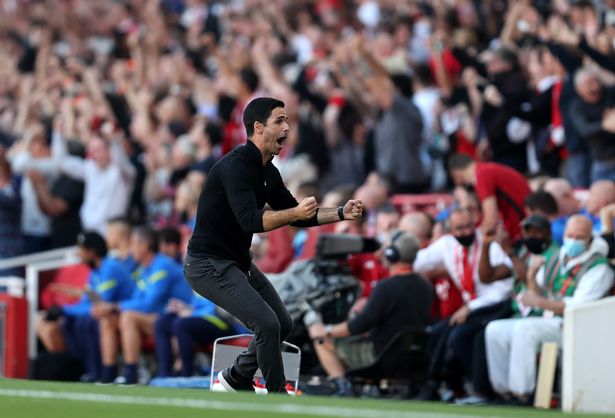 About a year ago, I began writing a piece titled “Arteta Train Starting to Picking Up Steam at Arsenal.” Now, nobody ever read that hypothetical story because Arsenal and their manager Mikel Arteta quickly ran into a bad run of form after what was a good start to the 2021-22 Premier League season. I felt the piece no longer held as much validity. One year on, I’m now confident that Arteta’s project at Arsenal is finally taking its true shape, and boy is it impressive.

When Arteta was appointed Arsenal manager in December of 2019, the London club had just sacked Spaniard Unai Emery after a poor start to the season, and following a loss in the Europa League Final against Chelsea that previous May, supporters were keen to see him leave.

The decision to bring in Arteta was without question a bold one. Arteta had never been a manager in any capacity in his career; however, he had just spent nearly three years as Pep Guardiola’s assistant coach at Manchester City.

While Arsenal fans were not under the illusion that Arteta would be just as good as Pep, they were excited by the prospect of someone who had worked so closely with arguably the best manager in the world for a decent chunk of time.

Arteta’s first few months at the helm were underwhelming, and then COVID hit, pausing the Premier League season. When the teams came back, Arsenal were not playing any style of soccer that could be associated with a Guardiola team. Arteta was making sure they were solid defensively, and that they could stay in games and not get blown out by trying to play a style that did not suit the players at Arteta’s disposal.

While this style of play frustrated Arsenal fans, it was clear that Arteta could not play the way he wanted to with the players he had. However, Arsenal fans would later reap the benefits of this pragmatic style of playing.

Despite there being no fans in the grounds, Arsenal managed to beat Manchester City in the semi-final of the FA Cup. They managed this not by playing open and exciting soccer, but by being solid at the back and taking their chances when possible.

Arsenal then came back from 1-0 down in the final against London rival Chelsea to win the FA Cup and perhaps get some revenge for the Europa League Final the year before. With a trophy secured, hope was at an all-time high for Arsenal and their fans. However, the 2020-21 campaign was far from smooth sailing.

In the summer leading up to the campaign, Arsenal made some odd signings, the most curious being Willian. Then in his 30s, Willian came to Arsenal on big wages and seemingly did not fit the style Arteta wanted to play. With players like Willian and leftover players from the Emery era, Arsenal struggled mightily and missed out on European competition for the first time since 1995 as they finished eighth. With question marks over Arteta, the summer of 2021 was going to be crucial for them.

The summer started off well. Ben White was brought in from Brighton for 50 million pounds, as was Aaron Ramsdale, Martin Odegaard, and Albert Sambi Lokonga. All of these players fit Arteta’s mold: young, hungry and determined to make it at the top level.

After three losses to start the Premier League season, many were ready for Arteta to go. However, Arsenal’s owners, the Kroenke family, stuck by their man. Soon enough, Arsenal began playing scintillating soccer and earned a signature win against North London rivals Tottenham. It was at this point last year I was ready to voice my opinion on the good job Arteta was doing, and yet things went south once more.

Arsenal’s youth was showing, and they lacked the experience to finish off a solid season, leaving them tantalizingly close to a top four finish, which would have seen them return to the Champions League. Arteta and his men would have to settle for fifth.

While Arteta and his team were no doubt disappointed with coming up just short, there was most definitely an air of confidence amongst the team. To build on that, Arsenal had a huge summer transfer window in 2022.

The first signing was young Portuguese star Fabio Vieira, who was unproven but had huge potential. Then came the statement signing: Brazilian striker Gabriel Jesus from Manchester City. His teammate Oleksandr Zinchenko soon followed. Those two signings would prove to transform Arsenal’s team.

From the first minute of the first game of Arsenal’s season, you could see that Jesus was world-class. Combine his talent with the young stars like Bukayo Saka and Gabriel Martinelli, and Arsenal have a genuine world-class attack. Zinchenko, like Jesus, was taken for granted at City; their talents were never able to shine on a team full of stars. But at Arsenal, where they’ve been properly utilized, they look like world beaters.

After beating Crystal Palace on the opening day of the season, Arsenal have gone on to win six of their first seven games, and they sit atop the Premier League table. Not only are they getting results, but they are playing some of the most beautiful soccer I’ve seen in a while. Dare I say, Manchester City and Guardiola-esque.

Arsenal could have sacked Arteta after finishing eighth in back-to-back seasons. The ownership could’ve also decided that what Arteta had done did not deserve hundreds of millions in investment into players. And yet, through all the turmoil, Arsenal have come out the other side a team transformed and reborn. No longer a stale club with players who had overstayed their welcome, but a destination for hungry players to make and solidify their names.

Huge credit has to be given to the Arsenal board, but even more credit must be given to Arteta. The Spaniard has demonstrated bravery in his recruitment and tactics, and shown that he is up there with the best managers in Europe.

Arsenal are now being debated as potential title contenders. I would say it’s still a bit too early for that, but then again, I also didn’t think I would ever be writing a piece commending the work of the Arsenal board and Mikel Arteta.