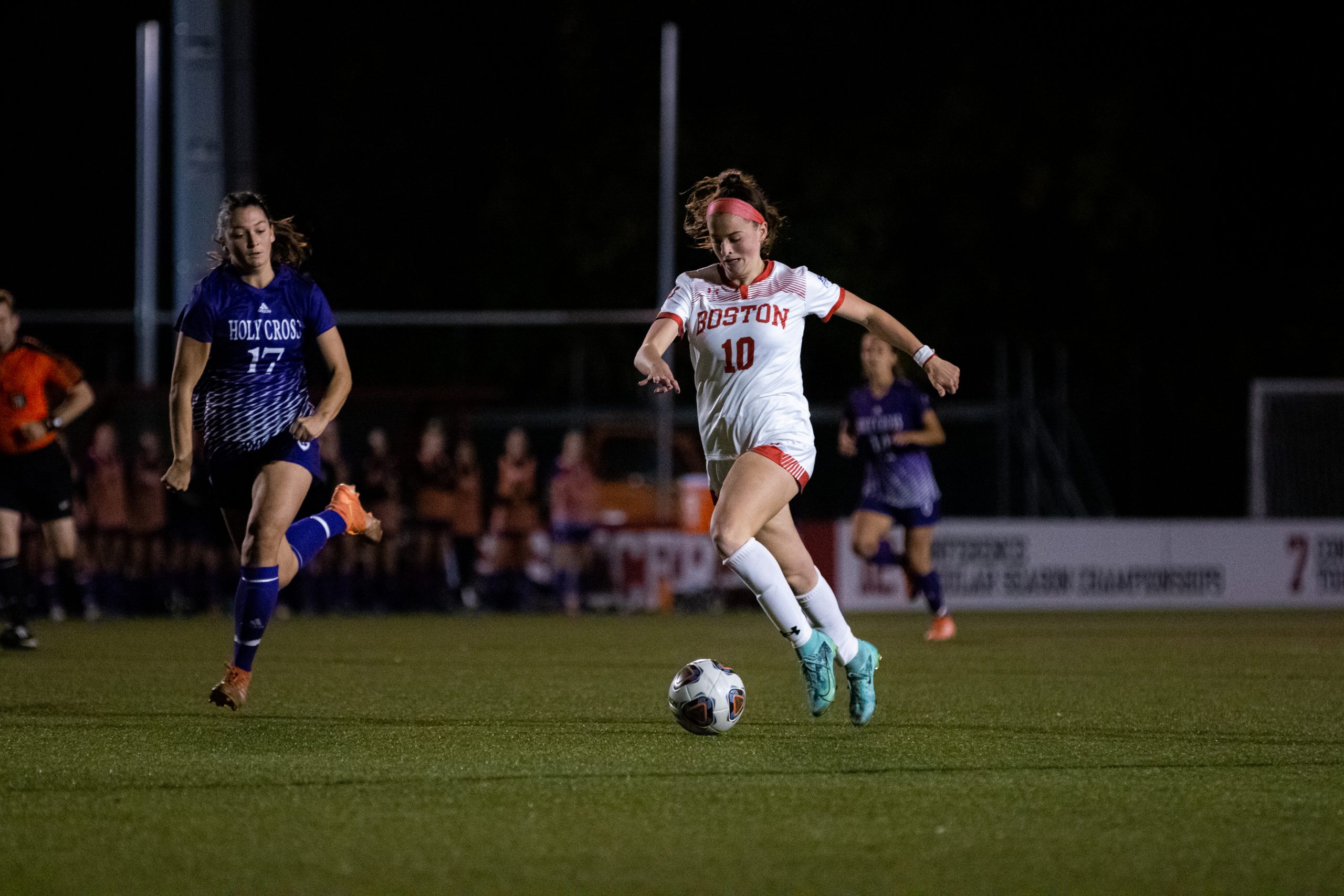 The Boston University women’s soccer team (9-5-1, 5-1-0 PL) celebrated Pride Night and Faculty Appreciation Night at Nickerson field with an impressive 3-0 victory over Holy Cross (1-12-1, 0-5-1 PL) on Thursday night extending their winning streak to five. This marks the third time all season in which the Terriers have ended a game with a margin larger than one goal.

For the Crusaders, it marks the third game in a row being shutout and the seventh game all season. Holy Cross’s freshman goalkeeper Olivia Dublin did, however, reach five saves on the day, further extending her lead as the current Patriot League leader in the category.

The Terriers held control of the ball as they dominated time of possession for most of the game. Holy Cross’s six shots were pale in comparison to BU’s fourteen.

Boston University’s senior forward Amy Thompson notched the first goal of the game, while freshman forward Morgan Fagan and junior forward Marli Rajacich each knocked in a goal in the second half.

With the win, BU remains on top of the Patriot League with three games remaining in the season.

The game started with an exchange of shots as Holy Cross junior forward Katie Quinn hit the right side of the net and BU sophomore midfielder Kiley Bertos shot wide left.

The Terriers kept knocking at the door with multiple opportunities downfield; however, interceptions and bad passes left only one shot on the stat sheet to show for it. Throughout the majority of the half, Holy Cross faced difficulty in finding their offensive third of the field. The best opportunity to break the deadlock  at this point in the game was a shot in the 29th minute by BU sophomore forward Jenna Oldham, yet Dublin made a great save.

The Holy Cross defense had held strong as the Terriers applied pressure until they eventually cracked in the 34th minute as Terrier junior midfielder Sophia Woodland passed to Thompson who rolled a goal in the left side of the net to make it 1-0.

Holy Cross attempted to answer with a shot two minutes later in the 35th minute, yet it was saved by freshman goalie Celia Braun to go into halftime with a lead.

The Terriers did not take their foot off the gas going into the second half as sophomore forward Abigail McNulty had a shot saved in the 48th minute. This did not demotivate her, however, as McNulty had a textbook cross to the center of the box where Fagan was able to head it in to take a 2-0 lead in stylish fashion.

The second half told a story similar to the first as the ball rarely left the toe of the BU offense. The Terriers put the final nail in the coffin in the 74th minute as a long pass met junior forward Geovanna Pereira racing past the Crusader defense who then found Rajacich in the center of the box to make it a 3-0 game.

The BU defense closed out the game to finish out the three game home stand with three shutouts.

The Terriers will have a tough matchup next Saturday against the second place Bucknell (7-6-2, 4-1-1 PL) in Pennsylvania.