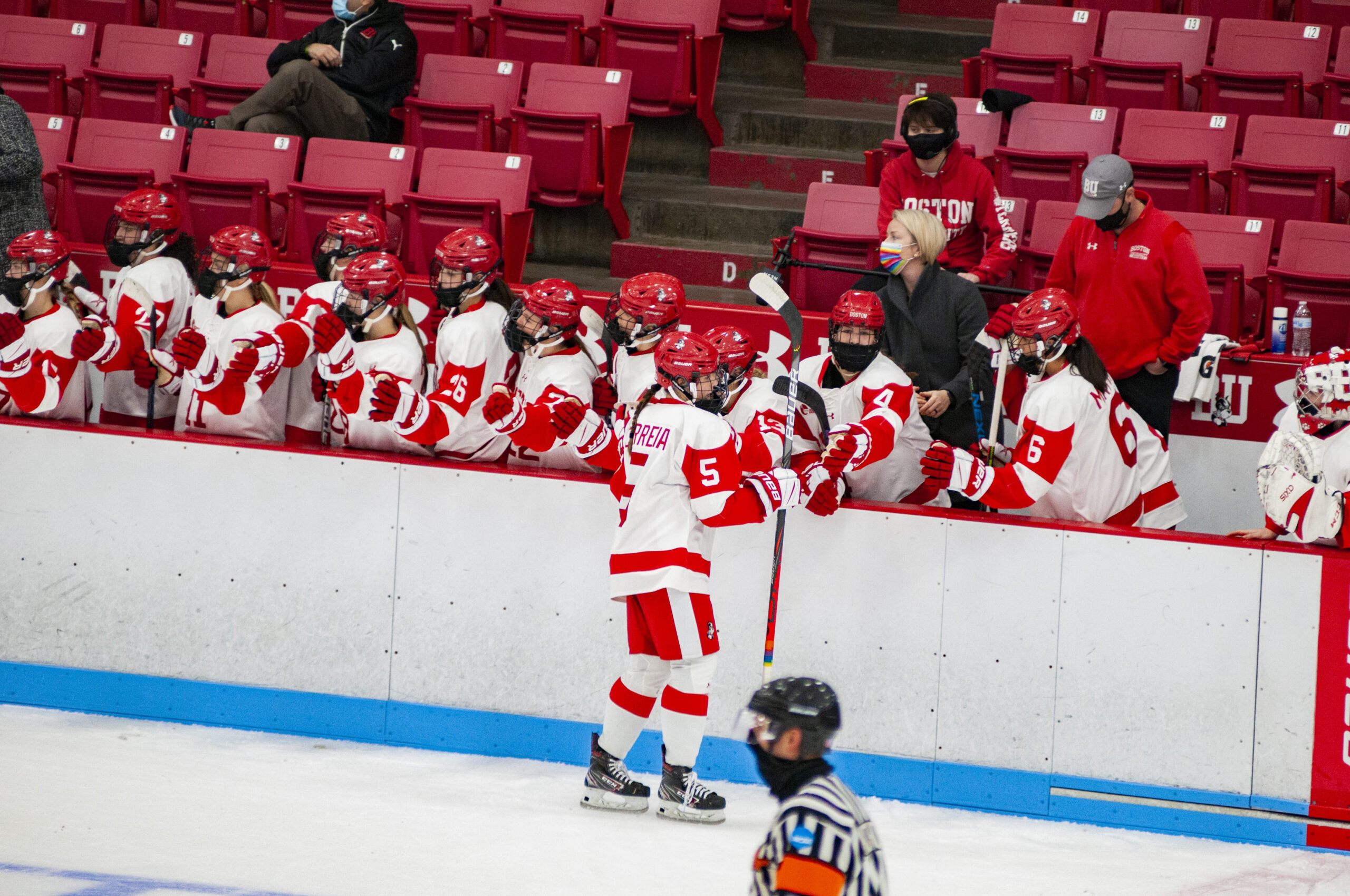 DURHAM, N.H.- The Boston University Terriers (3-0-1, 3-0-1 HE) continued their unbeaten start to the 2021-22 season by earning a tie on the road against the University of New Hampshire Wildcats (0-3-1, 0-3-1 HE). The Wildcats picked up an extra point in the standings by winning the shootout.

Coming off of an emotional win against the No. 2 Northeastern Huskies on Friday night, the Terriers could not match the intensity they played with on Friday, looking lethargic to start the game. In a similar scenario to the Terriers’ last visit to Durham, the Wildcats got on the board first just five minutes into the game.

Just like in that previous game, freshman forward Kira Joudikis broke the ice, and just like the last game, scored off the rush. Juodikis came down the left wing with plenty of speed and ripped one far side over the glove of BU goaltender Kate Stuart.

Freshman Kira Joudikis scores a goal early in the first period to give the Wildcats a 1-0 lead! #BeTheRoar

It didn’t take long for the Terriers to respond. Just over a minute after Juodikis’ tally, first-year forward Christina Vote got the equalizer. Vote parked herself in front of the Wildcat net and redirected a shot from senior defenseman Alex Allen to even the score at one apiece. It was Vote’s second goal in as many games.

Alex placed the shot in the right spot for Christina's nifty redirection that tied this game at 1-1. pic.twitter.com/6mrSmIsooq

UNH outshot the Terriers 12-4 in the opening frame, but some quality play from Kate Stuart kept the score even heading into the first intermission.

The Terriers came out hard on the forecheck to start the middle frame, and just over three minutes into the second period, they pulled in front. Senior forward Courtney Correia peeled off the left wall and wristed a low shot toward the goal. UNH goaltender Nicky Harnett turned the initial shot aside, but first-year forward Kylie Roberts quickly knocked in the rebound for her second goal of the season.

Good cycling by Mack and Court leads to a rebound chance for Kylie, and she cashes in to give us a 2-1 lead! pic.twitter.com/I5RwTuJS16

The Terriers were unable to get any momentum from their second goal. Despite trailing, the Wildcats peppered Kate Stuart with a barrage of shots. Stuart was calm, cool, and collected until late in the period. The Wildcats finally tied the game with three minutes left in the second period when UNH forward Brooke Hammer wheeled a wrist shot on net from the right-wing.

Stuart struggled to corral a rebound, UNH forward Paige Rynne poked it loose, and freshman forward Marina Alvarez followed up the play and tapped in the rebound for UNH. It was Alvarez’s first career collegiate goal.

IT'S A TIE SCORE! Freshman Marina Alvarez scores a goal to even the score at 2-2 #BeTheRoar

The two teams went to the locker rooms tied at two after two periods of play.

The Terriers came out flying to start the third period, and it didn’t take long for them to take the lead. Just over three minutes into the third, Parker used her speed to create a two-on-one opportunity and found Correia cutting to the net. Correia tapped in the go-ahead goal to put the Terriers ahead 3-2.

Defense quickly turns to offense as Court gives us a 3-2 lead. pic.twitter.com/9qXRgBF4jO

Just three minutes later, however, UNH forward Tamara Thierus pulled the Wildcats even once again. The junior forward from Quebec fired a shot just wide of the net, but she followed up her rebound off the boards and pushed a backhand over the right shoulder of Stuart and into the net to tie the score at three apiece.

TIE GAME! Junior Tamara Thierus scores a goal at 13:07 in the third period, to even the score at 3-3 #BeTheRoar

The two teams finished the third period tied 3-3 and headed to three-on-three overtime. The Terriers had several chances to ice the game, including a power play opportunity, but came up empty. The game went down as a tie in the Hockey East standings, but UNH earned an extra point in the standings with a shootout victory. Junior forward Jada Christian scored the lone goal of the shootout when she slid the puck five-hole on Stuart.

GOAL! Junior Jada Christian scores a goal in a penalty shootout to give the Wildcats a 1-0 advantage, and secure the win against Boston University #BeTheRoar

The Terriers will return to action against Merrimack on Friday in a home contest at Walter Brown Arena at 7 p.m.