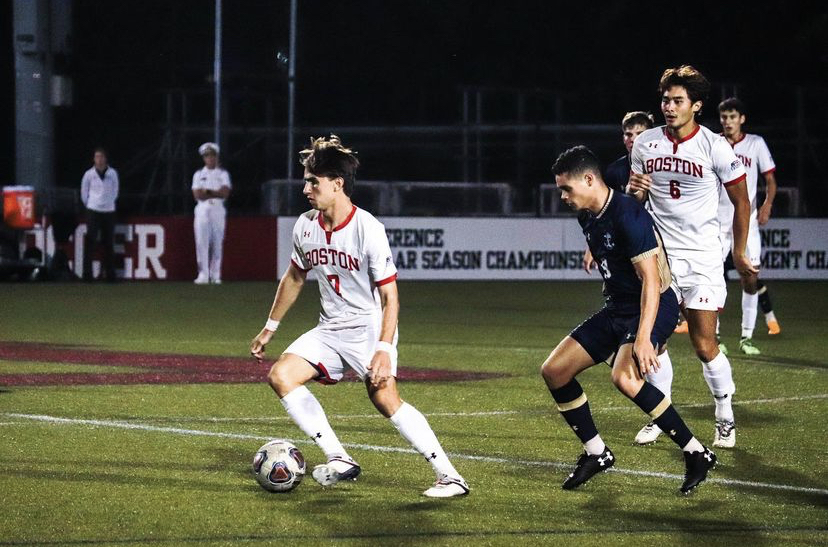 A mere minute into extra time against Boston University (1-5-1, 1-1-0 PL) on Saturday, Lafayette College (5-3-1, 1-0-1 PL) junior midfielder Yiannis Panayides bumbled in a cross into the back of the net. His golden goal was the decider – a walk-off to ensure the Leopards remained undefeated at home and to keep the Terriers from their second win of the season.

For the Terriers, the result echoed the same attacking deficiencies that have plagued them so far this season. Through seven games, the Terriers have only scored five goals, which is second to last in the Patriot League. To provide more insult to injury, this match also marks the third time this season the Terriers have dropped points in extra time.

“Anytime you lose in overtime, you’re going to take it harshly because you had the opportunity to go and get three points,” BU head coach Kevin Nylen said postgame.

From kickoff, both sides were locked in a defensive duel with chances coming scarce for either team in the first half. A majority of shots from the Terriers, of which there were five in the first, came in moments of offensive transition.

The Leopards dominated possession from the onset and looked to use height and size to their advantage. Their attacking play hinged on crosses and long throws aimed at the head of 6-foot-2 forward Marcos Kitromilides and 6-foot-4 midfielder Hale Lombard.

“You want to limit how many times the ball is in your half and limit balls getting played out in your defensive third,” Nylen said on how he planned for Lafayette’s play style. “You just have to be prepared for what you know what’s coming.”

Nylen’s group held strong in the first 45 minutes and held the home side to two shots on goal. The second saw the Terriers lose their grip of the game, however, as the Leopards started to test deputy goalkeeper Andrew Wike who filled in for the injured Francesco Montali.

The Leopards truly started to back the Terriers into a corner in the latter stages of regular time. In the 74th minute, a long throw by Leopard midfielder Will Echeverria ended in an acrobatic save by Wike and, shortly after, the home side enjoyed a series of three consecutive corners.

“We were better in the first half and in the second half we weren’t really consistent in our rhythm of the game,” Nylen said. “We didn’t have a great second half and they were able to capitalize early on in overtime.”

The game clock saved the Terriers from a loss within regulation, but their respite from the Leopard’s attacking barrage proved to be short lived. Almost as soon as the whistle went off to signal the start of extra time, the Terriers were picking the ball out of their net.

Panayides’ goal wasn’t conventionally pretty, but was an unequivocally emphatic nail in the coffin for a Terrier backline that bent so much throughout the match that a break seemed inevitable.

With the result, the Terriers drop to five losses and concede their first Patriot League game of the season. They return to play Wednesday at 6 p.m away to Army.