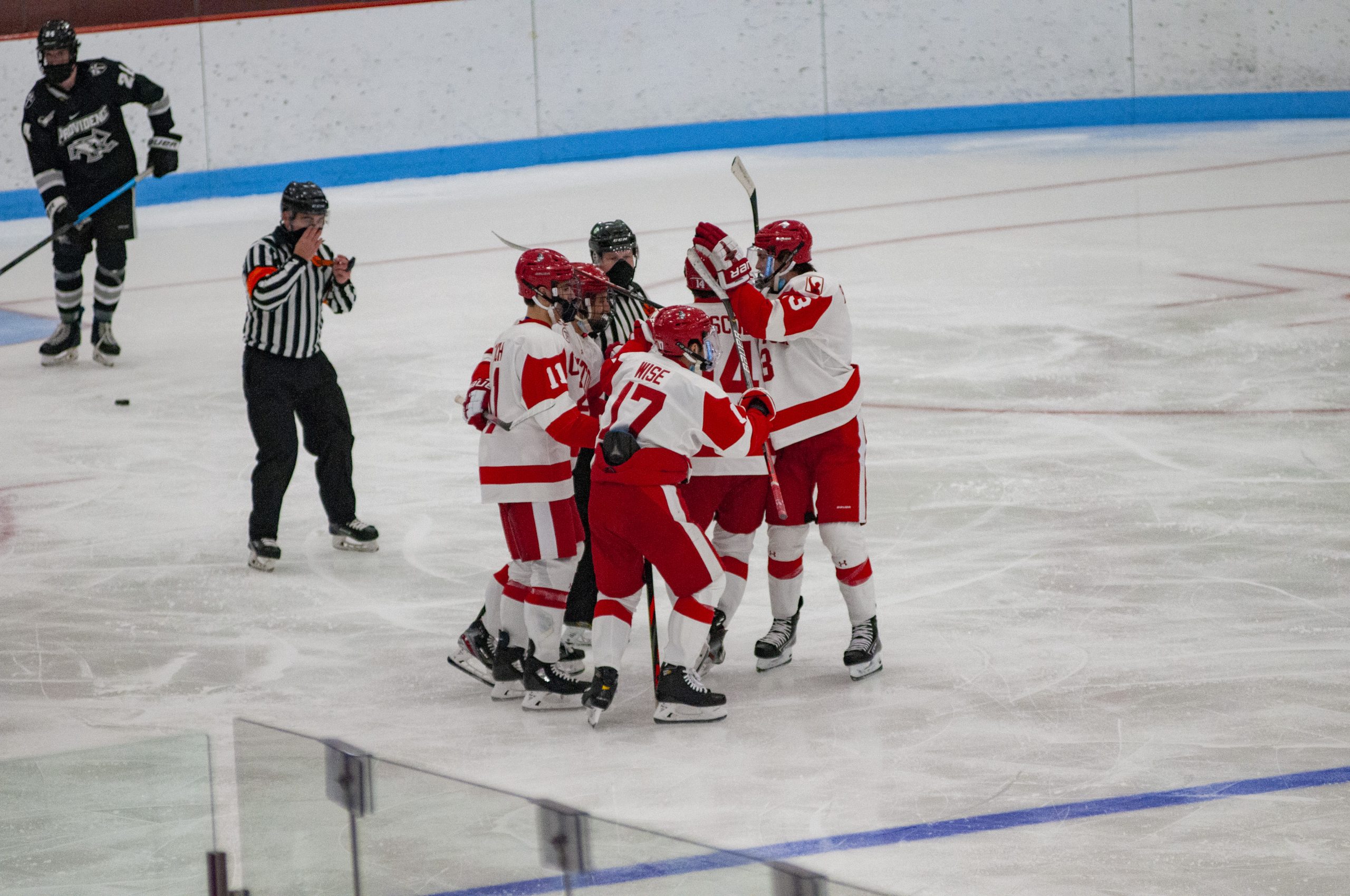 The Boston University Terriers (0-1-0) fell to the Providence College Friars (4-3-2) by a score of 7-3 at Walter Brown Arena on Friday night.

For the Terriers, it was their first game action in 307 days after the start of the 2020-21 season on Comm. Ave. was delayed multiple times.

“It was a frustrating one, you kind of could have predicted it in a lot of different ways,” BU head coach Albie O’Connell said. “I thought our guys played hard.”

Freshman goaltender Drew Commesso got the nod for the Terriers, while Jaxson Stauber went for the Friars.

Less than two minutes in, Providence got the scoring started as freshman forward Chase Yoder collected his first collegiate goal in a net-mouth scramble with Commesso down and out.

With 12:14 remaining in the first, Providence junior captain Tyce Thompson slipped by the BU penalty killers for a breakaway on Commesso, but the freshman stoned him with a five-hole stick save.

Shortly after, the Terriers went to the power play for the second time. BU generated good pressure and attacking zone time, and peppered Stauber. In the midst of a net-front scrum, sophomore transfer Jay O’Brien cleaned up the loose puck off the rebound for his first as a Terrier to tie the game at one apiece with 10:43 left in the first.

Just 1:32 later, junior assistant captain David Farrance and freshman forward Luke Tuch broke in on a two-on-one. Farrance sent a nifty, spin-around pass across the crease to a wide open Tuch, who roofed the shot for his first collegiate goal and point, making it 2-1 in favor of the Terriers.

Here’s a look at Luke Tuch’s first collegiate point and goal earlier, thanks to a SLICK feed from David Farrance. pic.twitter.com/WTpNaE2mCS

“I thought Luke Tuch was a man,” O’Connell said. “They played really well.”

Farrance earned the primary helper on both BU goals, while graduate transfer Max Kaufman picked up the secondary assist on Tuch’s tally for his first point on Comm. Ave.

The 2-1 lead held heading into the first intermission for BU, but the Terriers entered the second period continuing to apply pressure to the Friars.

Just 5:19 into the second period, sophomore defenseman Sean Driscoll collected the puck along the boards at the point and sent a seeing-eye shot towards goal. The puck beat Stauber to the glove side, giving BU a 3-1 lead and Driscoll his first collegiate goal and point.

From there, the momentum completely swung in Providence’s favor, however. Just as a PC power play wrapped up, Thompson fired a shot from the right faceoff circle that found its way under Commesso, pulling the Friars within one with 10:52 left in the second.

Just 51 seconds after, Yoder tallied his second of the contest off the rush, tying the game at three apiece. Then, with 3:30 left in the middle stanza, Friars sophomore defenseman Max Crozier made it 4-3 for Providence.

Entering the third down a goal, the Terriers could not get anything going offensively on the Friars, and senior blueliner Ben Mirageas gave Providence a two-goal cushion.

“I thought was a good game for a little bit, and then it kind of got away,” O’Connell said. “We could tell just with guys even at the end of the first period coming back to the bench, they were gassed.”

Following the goal, sophomore netminder Ashton Abel entered the game in relief of Commesso, who finished his night without much support from the other guys on the ice, making 38 saves on 43 shots.

Freshman Brett Berard picked up his first collegiate goal on Providence’s sixth goal, while sophomore forward Patrick Moynihan notched his first of the season on the Friars’ seventh tally of the night.

“I think Commesso is going to be a stud,” O’Connell said. “I think he’s going to be dynamite. He faced 40 shots in two periods, and he hasn’t played a game since last March.”

“I thought he handled himself pretty well. That’s what I said to him on the bench, like ‘this has nothing to do about what the score is or how you played.’”

Abel wrapped up the third with nine stops on 11 shots.

After the game, O’Connell attributed much of BU’s struggles to not being in game shape, due to their lengthy delay getting the season going.

“Our team hasn’t played a game since last March,” he said. “We’re going to play our way into shape.”

BU senior captain Logan Cockerill agreed with O’Connell, but noted that the team cannot use fatigue as an excuse.

“I thought we well good for the first 30 minutes,” Cockerill said. “We had a lot of energy in the first half the game and it seemed like we just kind of died out.”

“I think it’s important for us not to get mad at each other, not get mad at our game, but we’re gonna have to take a look at some film, fix the mistakes, and kind of find our identity as a team.”

Providence assistant coach Ron Rolston was pleased with how his group responded to adversity after going down a goal in the second.

“I was obviously happy with the way the guys played, especially the last 40 minutes,” Rolston said. “As the game went on, we started playing the right way and, and got some results.”

With six skaters out of the lineup for unknown reasons – Robert Mastrosimone, Wilmer Skoog, Case McCarthy, Sam Stevens, Cade Webber and Markus Boguslavsky – O’Connell had high remarks for the newcomers who were thrown into the fire, between the first years and the midseason additions.

“I thought they were really good,” O’Connell said. “Our freshmen are good. They’re very good and they’re going to be impactful.”

The Terriers and Friars will reconvene on Saturday night at Providence’s Schneider Arena. Puck drop is set for 7 p.m.

David Farrance lays a big hit on Brett Berard, and collects teammate Joseph Campolieto in the process. (via @NESN) pic.twitter.com/h6hpwgoZT5