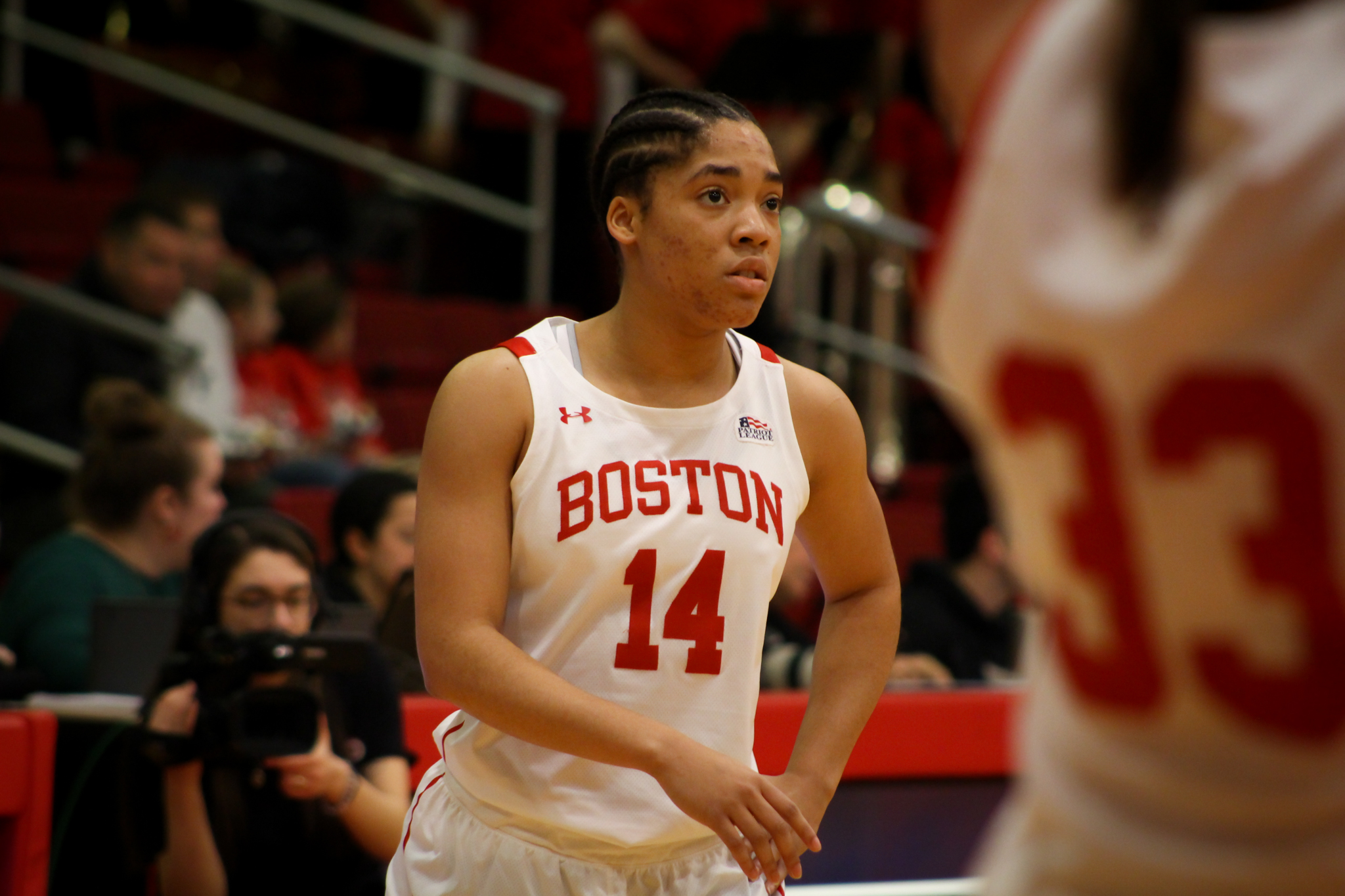 The five-player squad — consisting of Maren Durant, Sydney Johnson, Annabelle Larnard, Maggie Pina and Liz Shean — was the X-factor for a Terrier team with depth as a major question mark entering 2019-20. And while the freshman quintet demonstrated its fair share of inconsistencies, they ultimately proved vital to BU’s rise as a Patriot League power. Pina took home Rookie of the Year honors. Johnson and Durant joined her on the All-Rookie team. All five made their cases for a long-term rotation spot.

This season, the Terriers are among the frontrunners for the Patriot League title, and the five sophomores have a season of experience to lean back on. Here’s a look at how each player might fit into the 2021 picture. 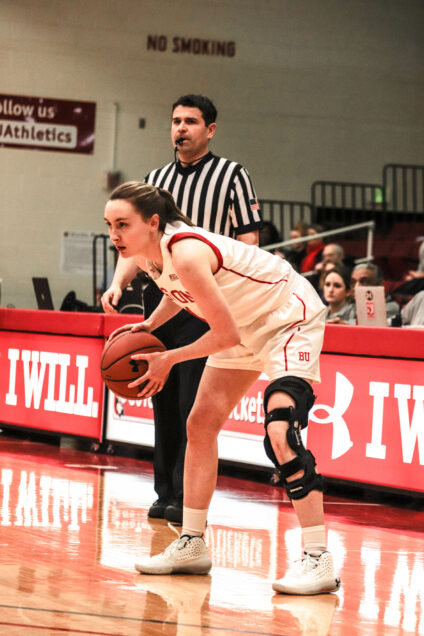 Shean played the least among her freshman teammates, taking the floor for just 30 total minutes. The 5-foot-8 guard had spent over a full year recovering from an ACL injury, so her freshman year was more of a chance to get comfortable on the court again. When she made appearances, Shean often sported a massive brace on her left knee.

Over half of her statistical season came in a single game. Shean played 18 minutes in a February win over Lehigh, scoring five points and nabbing two steals. Even with the brace, Shean played with energy and physicality. Ultimately, her shooting numbers were the major downfall — just 2-for-11 across the whole season. Shean can facilitate an offense and set an aggressive defensive tone, but she gets bogged down by limited athleticism and streaky shooting.

For the first time under Moseley, the Terriers boast an impressively deep backcourt. Katie Nelson, Maggie Pina and Sydney Johnson are the incumbents, Sophie Beneventine and Kelsi Mingo are two freshman guards, and Emily Esposito and Tenisha Pressley figure to play as guard/wing hybrids. Shean has a tough road to playing time. Her voice and energy are an asset on the court and on the sidelines, but she has to reliably produce on offense to lock down a role.

On Opening Night against Marist, Larnard was one of two freshmen thrust into the starting lineup. She immediately demonstrated potential as a stretch forward, as evidenced by a pretty unreal 16-for-31 line from deep on the season. The six-footer earned the bulk of the starting gigs in nonconference play before shifting to a high-minutes role off the bench. But in January, Larnard went down with a foot injury that sidelined her for nearly two months. By the time she got healthy, the Terriers were rolling with their set rotation, so Larnard ran out of time to jump back into action.

But her game fits a lot of needs for this year’s squad. Larnard might be the best distance shooter on the roster not named Maggie Pina, and with BU’s offense being notoriously streaky, she can help stabilize the floor. She also rebounds well for her position. The major weakness is Larnard’s ability off the dribble. She’s unafraid to drive into contact, but can lose control and put up some wild attempts at the rim; she made just 25 percent of her twos as a freshman.

Larnard undoubtedly has a place in BU’s rotation for 2021. The frontcourt is relatively inexperienced behind Riley Childs and Maren Durant. Larnard figures to slide between the 3-4-maybe-5 positions, stretching the floor and cleaning the glass. While her three-point rate is bound to fall, her efficiency inside should also improve.

A shifty guard with impressive pace-changing ability, Johnson logged the third-most minutes of any Terrier last season, and led off with a 21-point outburst against Marist. It would be the season high; Johnson was radically up and down as a freshman. On good days, she broke down defenders off the dribble, dished out flashy assists and knocked down long-range shots. On bad days, she couldn’t buy a bucket, and it led to frustration and turnovers.

However, I buy a serious leap in efficiency for the 5-foot-9 guard. Johnson actually made 37 percent of her threes in conference play, and generally seemed to settle into a comfort zone when BU started to click as a whole in late January. She’s also a pest as a point-of-attack defender. Johnson frequently generated steals in the early seconds of the shot clock, and her speed can almost guarantee a fast-break bucket. Even with the offensive inconsistency, she still earned a spot on the All-Rookie team.

Once again, the backcourt is exceedingly crowded at BU. Towards the end of last season, the Nelson-Pina-Johnson trio was humming on the court. But Esposito and the new freshmen also have promise. This might lead to a slight minutes crunch for the sophomore, but it also should take some pressure off and allow Johnson to play more freely.

Pina won Patriot League Rookie of the Year after exploding over the final two months of the season. Since scoring 23 points in BU’s statement win of the season over Holy Cross, the sharpshooting guard reached double digits in all but three games. She was simply elite off the catch, and as the year went on Pina became the centerpiece of BU’s offense. She simply took over some games with her shooting gravity.

However, of all BU’s players, Pina could be hurt the most by the extended break and unusual schedule. Teams had limited time and footage to use during her freshman year. Now, with less teams to prepare for and more games to focus on BU, opponents can emphasize the need to harass Pina off the ball and swarm her when she has it. The sophomore has a solid handle, but her size at 5-foot-7 and her lack of quickness keep her from being a real shot creator.

Pina should be a key cog for the Terriers in 2021. Her numbers from deep might dip slightly, with teams now understanding that she is one of the conference’s premier three-point threats. Turnovers are also an area of note, especially if she draws unique defensive looks and double-teams. Regardless, Pina should be among the team leaders on the score sheet.

Though other rookies had more production in year one, Maren Durant might be the most critical barometer for BU’s success this season. The 6-foot-3 center set the tone on the defensive end in the second half of the season, earning a spot on the All-Rookie and All-Defense teams in the process. She locked up some of the best opposing bigs in the conference, dominated the glass, and generally anchored that aforementioned stifling defense. Durant averaged 7.0 points, 7.4 rebounds and 2.0 blocks per game when she hit conference play.

Two concerns put a damper on Durant’s ceiling: foul trouble and turnovers. The tough-minded sophomore picked up at least four fouls in seven of the last twelve games. A number of those occasions meant Moseley had to pull her for long stretches in the game’s middle segments. The tided turned severely in BU’s streak-snapping loss to American because Durant fouled out in the closing minutes. On the offensive end, she is a solid finisher inside, but averaged two turnovers per league game.

Durant has the potential to be a game-changing presence for the Terriers. Their opponents — specifically Colgate, Army and Holy Cross — graduated some of the conference’s toughest interior forces. If Durant is disciplined, she can feast on some of these defensive matchups, potentially en route to more All-League honors. But BU’s frontcourt depth is suspect behind her and Riley Childs, so it is imperative that Durant keeps herself on the floor.