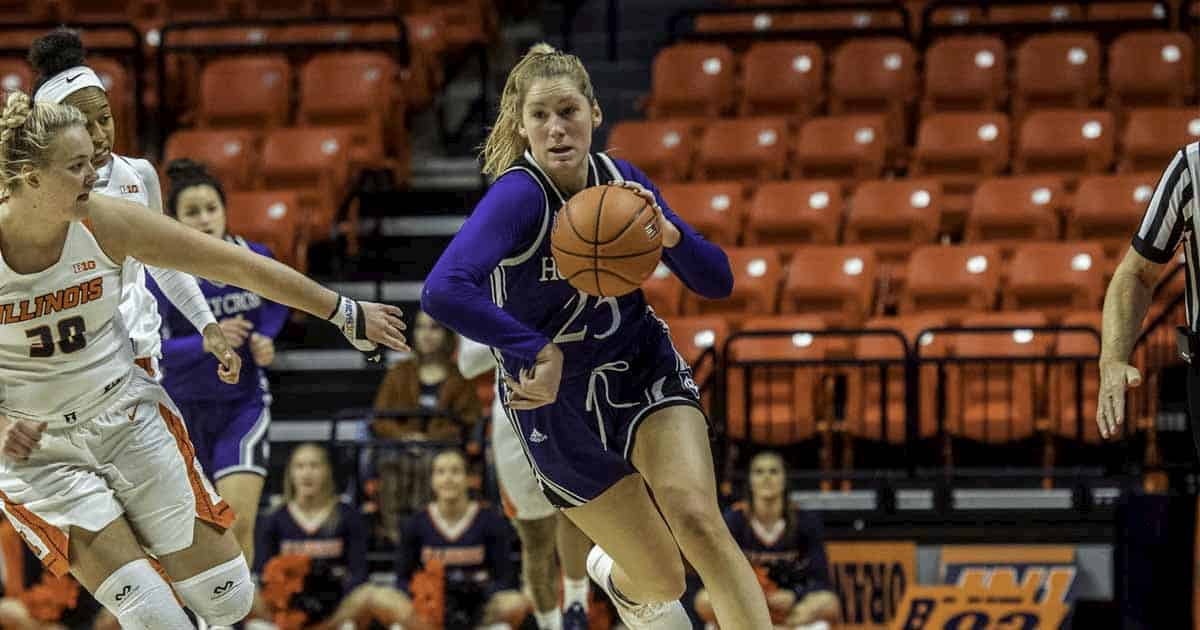 Non-conference play is nearly complete for college basketball teams across the country. As Boston University wraps up 2019 with a home contest against Northeastern, anticipation builds for the upcoming Patriot League regular season.

BU sits right in the middle of the Patriot League pack with a 4-6 record. Though non-conference records are a vague indicator of a team’s true potential heading into 2020, the first half of the season does provide a glimpse into the strengths and weaknesses of every squad. Here’s how the Terriers’ conference opponents have shaped up through Christmas Day.

Rachel the drive and the foul! pic.twitter.com/Whf3Y35ZMI

Colgate ranks second in the Patriot League in scoring; the Raiders have scored fewer than 70 points only three times this season. Thompson is a big part of the success they’ve had on the offensive end of the floor. Thompson leads the team in points, rebounds, and assists. Langan and Schubiger are also solid scorers.

The Raiders put forth a strong defense, holding opponents to an impressive 26.8 percent mark from three. They can steal the ball and force turnovers, giving them extra opportunities to score if their offense lags.

The Raiders are active on defense and they’ve forced 215 turnovers on the season. That doesn’t match up well with the Terriers, who have been turnover-prone all year long. BU is turning the ball over 15.5 times per game, and opponents are scoring 14.9 points per game off of turnovers alone.

Bucknell’s offense is built around taking smart, low-risk shots. The team shoots 42.8 percent from the field — second only to Holy Cross in the Patriot League. Mack and Kapp are the team’s best scorers and both are highly efficient three-point shooters. On the playmaking front, Walls has stepped into a much larger role this season after getting minimal playing time last year. It’s been a successful transition, as she currently leads the team in assists.

The Bison don’t do anything flashy on defense but they have held their opponents to 60 or fewer points in eight games. They are particularly tough to score on at home, where they’re allowing 54.5 points on average.

Bucknell’s free throw percentage is one of the best in Division I basketball, so guarding them in the paint could prove difficult for the Terriers. Forward Tessa Brugler is especially skilled at drawing fouls and she’s taken the most free throws of anyone on the team.

Lehigh’s offense mainly goes through Buhr, the team’s leading scorer. Buhr is one of their better three-point shooters, but as a whole, the Mountain Hawks don’t present much of a challenge outside of two-point range. They’ve made a paltry 53 of 185 three-point attempts on the season.

The Mountain Hawks are a bigger threat on defense. They’re limiting opponents to only 57.6 points per game and they are effective perimeter defenders. Katie Nelson and Maggie Pina, BU’s top three-point shooters, need to focus on working the ball inside for the team’s two contests against Lehigh.

The Mountain Hawks aren’t a great three-point shooting team but they make up for that with their strong rebounding capabilities. Three members of the team are grabbing at least six rebounds per game, including Buhr and Grothaus. The Terriers haven’t been quite as strong in that category, so controlling the boards could present a challenge for Nia Irving and Riley Childs.

Holy Cross leads the Patriot League in scoring with an average of 74.4 points per game. The Crusaders can score inside, but they’re also lethal from deep. Their offensive attack is led by Manis, who averages 19.0 points per game and shoots a stunnng 57.1 percent from downtown. Three other players, including La Barbera and Swords, have double-digit scoring averages. Another one of the team’s strengths is their attentiveness with the ball—Holy Cross only turns the ball over nine times per game.

Defense isn’t as much of a strength for the Crusaders. They guard the perimeter well but have more difficulty getting stops in the paint. They’ve stolen the ball only 46 times so far this season.

The Crusaders have the highest three-point shooting percentage in Division I basketball by over three percent. On the other hand, BU has struggled to guard the perimeter at times this season. Opponents sank nine or more threes against them in four games.

Navy’s guards are the leaders of the offense. Ulasewicz is the primary playmaker, while Gatzounas is a top scorer and elite offensive rebounder. Coleman has provided a spark coming off the bench and she now leads the team in scoring. Her performance earned her a spot in the starting lineup for the Mids’ most recent game against George Mason on December 19.

Generating steals is one of Navy’s greatest strengths on defense. In their first two games against Stevenson and Clemson, they produced 42 takeaways. BU’s Katie Nelson and Nia Irving need to be cautious because they’ve been the most turnover-prone.

Haskins recorded a career-high 🔟 points and Kucowski got her seventh double double of the season in the Leopards loss to Seton Hall this afternoon.

The Leopards haven’t been able to get their offense clicking on the road this season—they have a 1-4 record away from Kirby Sports Center and they’re getting outscored by 18.5 points per game those contests. Kucowski leads the team in shooting and is a monster on the glass, grabbing over 12 rebounds per game. Santarelli is a solid interior scoring option, while Agnello has shown potential from beyond the arc but can be inconsistent.

Lafayette’s defense has earned them some of their wins. Taking away easy three-pointers has been a key part of their success on that end of the floor. Their best defensive performance came in their season opener, when they only gave up 29 points to Fairleigh Dickinson.

The Leopards’ inability to knock down free throws only makes it more difficult for them to score inside. Only two players on the team have been able to shoot at least 80% from the stripe. BU interior defenders Nia Irving and Maren Durant shouldn’t be afraid to foul if they need to do so in order to get stops.

The Eagles put up a solid effort on offense inside, but three-point shooting isn’t one of their strengths. Despite that, they lead the Patriot League with 21.6 three-point attempts per game. Marenyi is the team’s best three-point shooter but she still has room for improvement. Edwards leads American’s scoring with 16.5 points per game, although she’s been inconsistent from three as well. Most of the offense runs through Sanders, who serves as the Eagles’ primary playmaker.

Sanders also anchors American’s defense, despite being a bit undersized at 5-foot-6. She has blocked 12 shots all season, which is eight more than any of her teammates. She’s a threat to take the ball away at any time and she’s leading the team in steals for the second season in a row.

The Eagles have given up at least seven three-pointers in eight of their 10 games. They just haven’t been able to get stops on the perimeter, leaving the door open for Katie Nelson and Maggie Pina to light it up from deep.

Army can’t consistently put points on the board. They’ve reached the 70-point mark only once all season, and that was in a game against Fairleigh Dickinson that went into overtime. Part of the reason for their struggles is their 21.5 turnovers per game, which reduces their chances to score. Their offense is also hindered by their below-average three-point scoring and poor free throw shooting.

The Black Knights’ offensive woes pale in comparison to their defensive troubles. They have the worst defense in the conference, allowing their opponents to score 74.3 points per game on average. They also don’t steal the ball—the second-worst defensive team in the league, Loyola MD, has collected more than twice as many steals this season.

Army can guard on the perimeter but they have trouble stopping anything inside the arc. Nia Irving and Maren Durant should be BU’s biggest beneficiaries. They both do the majority of their scoring in the paint and Durant hasn’t even attempted a three-pointer this season.

Returning to Reitz Arena for the first time in a month, @LoyolaWBB used a big second quarter to help secure a 64-48 victory over Monmouth on Friday! #GoHoundshttps://t.co/YcE569hlz9

Similar to Army, Loyola has the turnover bug. They average 18.1 giveaways per game, which puts even more pressure on their shooters to make the most of their possessions. That hasn’t worked out well, as the Greyhounds have been respectable from two-point range but can’t seem to get their threes to fall consistently. Karcz and Gray have had to shoulder most of the scoring and playmaking load.

Defense isn’t exactly a bright spot for Loyola but they’re capable of stealing the ball to get some of their lost possessions back. Their best defensive work is on the perimeter, where their opponents are shooting less than 30% from downtown.

Key Stat: 13 blocks on the season

That total is tied for 340nd place amongst Division I basketball teams. BU isn’t much better and is sitting in 324th place with only 17 total blocks. However, the Greyhounds’ overall lack of verticality and defensive prowess should make it easier for the Terriers to have their way inside.