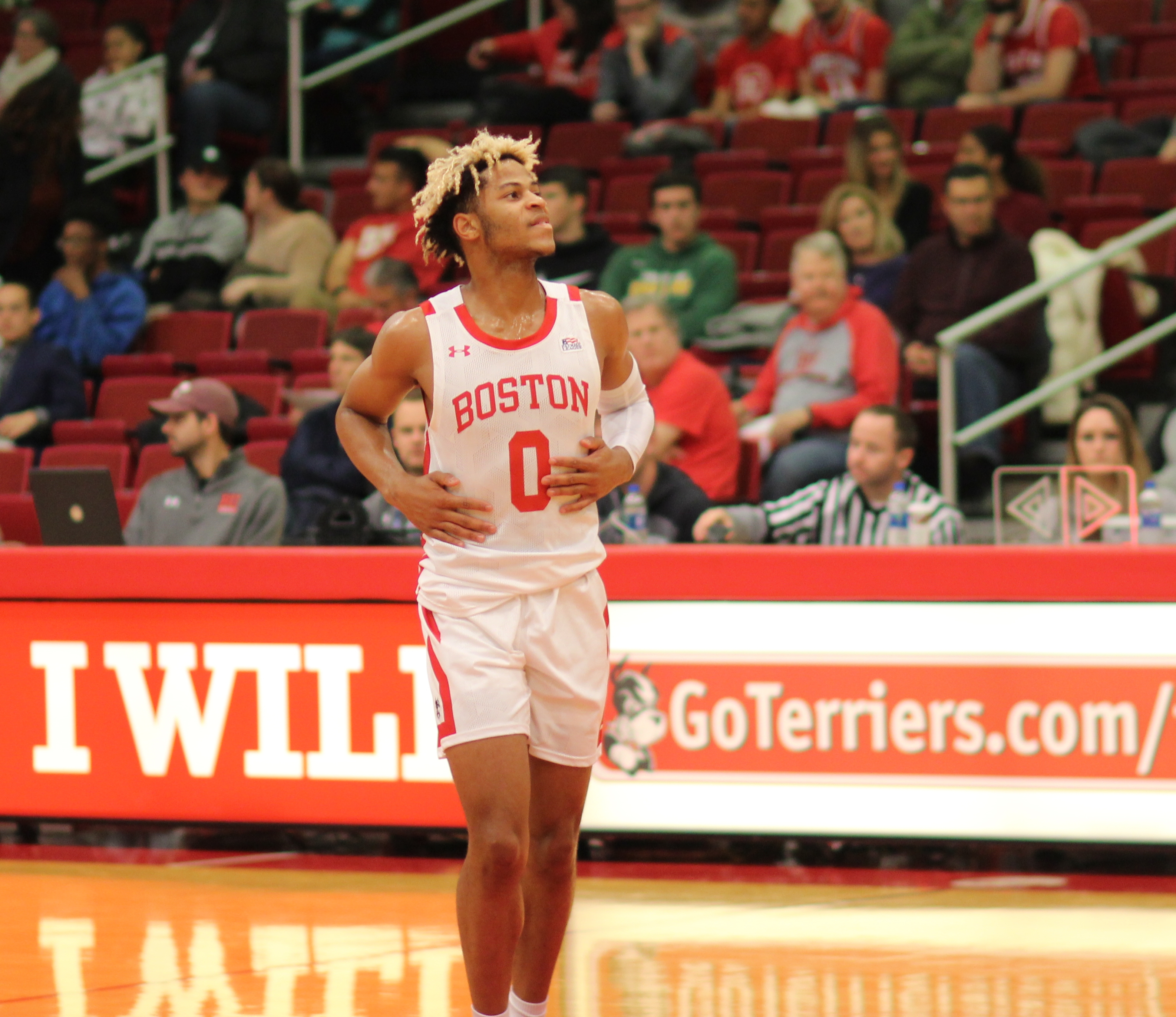 Energy radiates from Ethan Brittain-Watts. It erupts from his body when he roars from the sidelines. It ignites the point guard’s burst as he drives to the rim and powers through contact. It bounces from himself to his teammates via chest bumps, handshakes, and of course, a basketball.

Throughout a lifetime of competition, Brittain-Watts has channeled that energy into an insatiable hunger, using it to propel him through the basketball ranks and take him from the mecca of Indiana to Boston University. Now a freshman in a new city, Brittain-Watts has launched himself into the life of a college student-athlete while earning a prominent rotational role for the Terriers. The key to success has always been the same resolute focus.

“It’s a kill-or-be-killed mentality,” he says. “You gotta go out there and go at it, you know.”

“Life’s not gonna give anything to you, so you gotta go out and take it. I try to take that same mentality to the basketball court. Whether it’s offensively, defensively — I just try to give it all I can.”

Brittain-Watts exemplifies the fiery, competitive culture that is Indiana basketball. The state is loaded with NBA talent, Division I commits, and “dogs” that do whatever it takes to win at a high level.

“We grow basketball here in Indiana,” he says. “That’s the big saying, and I take a lot of pride in it.”

Brittain-Watts has become, as she puts it, “part of the culture he’s grown up in.” His first organized basketball experiences came by age three. He grew up shooting with and playing for the Teague brothers, as well as fellow NBA veteran George Hill. AAU leagues came into the picture early in elementary school.

As Brittain-Watts showed promise, and his drive to compete at a high level became evident, his parents explained that if he was willing to put in the work, they would back his aspirations the whole way.

The next levels for Brittain-Watts became Culver Academies and Nike’s Elite Youth Basketball League (EYBL). It took a while for Brittain-Watts and his family to find the right program that balanced player development with potential exposure, but his time with Indy Heat helped Brittain-Watts flash his competitive nature for scouts. One of them was Walt Corbean — assistant coach at Boston University.

“When you see him in those different environments, whether it be at the high school level or in the AAU circuit, you definitely see how competitive of a young man he is,” Corbean says.

High school proved instrumental in Brittain-Watts’ growth as both a player and person. Culver Academies, a small boarding school about two hours from his home in Indianapolis, is what the freshman believes prepared him for the academic standards at BU and the adjustment to the life of a college athlete.

He scored a game-high 23 points in the state championship and left it all on the line in his last game as an Eagle. pic.twitter.com/k9027tYfmV

“Shouts out to Culver,” he says, “because they really put you in this position where you have to balance your time. You have to do all the things you have to do in college at a younger age.”

Basketball at Culver also flipped a switch for Brittain-Watts. His mom vividly recalls his sophomore year, when the family attended the Indiana state championships. Ethan sulked in the stands, bitter that his team lost early in the postseason and was not on the court playing for the title.

Culver won the Indiana Class 3A state championship the very next year. Brittain-Watts led the way with 20 points in the title game.

Boston is not Indiana’s immersive basketball landscape. But Brittain-Watts sees the same hunger on the East Coast.

“They’re dogs out here, too,” he says. “They grind, they work out, and they work hard a lot of the time, so just a lot of go-getters. A guy like me can respect that.”

At BU, Brittain-Watts is adapting to a new world of basketball as well. Division I competition means speed and physicality increases in every game. For many freshmen, acclimating takes time.

“Every player is gonna go through that adjustment where guys are bigger, stronger, faster,” Corbean says. “How quickly they can adjust to that level of play determines when they’re able to see some success.”

“That’s just the biggest difference — the speed and physicality,” Brittain-Watts adds. “Guys are a lot quicker. Stuff you thought you could do in high school you can’t do anymore.”

Unlike at Culver, where the varsity team lost a combined 11 games over the guard’s last three years of high school, BU has stumbled out of the gate to a 4-7 record that includes a five-game losing streak and a period where Brittain-Watts was sidelined with injuries. For such a competitive athlete, this change could have been difficult — but he has taken the challenges with a healthy dose of optimism.

“He always has something positive to say, you know, ‘we need to work on this’, or ‘it was a tough team, the guys played well,’” Michelle Brittain-Watts says. “Especially when he was injured the last couple games. So he’s taking on more maturity with the game.”

The other part of college, of course, is academics. Brittain-Watts says that one of the strangest parts of college basketball is being away from the classroom so much. At Culver, he would come home from a game and be in school the next day. But when the team is on an extended road trip, this often is not possible.

“It’s not too much of a challenge but just, like, something you gotta do,” he says. “So I just have to stay on top of my academics a lot, meet my teachers extra, and do stuff like that.”

Fortunately, Brittain-Watts is fitting in seamlessly as a Bostonian. He’s a Pacers and Colts fan for obvious reasons, but holds respect for Tom Brady and the Patriots: “I always like to see greatness, and Tom Brady’s the greatest of all time.”

Compared to Boston, Indianapolis is “cool, calm and collected” in atmosphere, but the weather is as temperamental in the Midwest as New England. And Brittain-Watts has joined thousands of other residents in a common criticism.

“The traffic in Boston is definitely a lot worse.”

Brittain-Watts has relied on his teammates and coaches to help make the transition to college easier. The Terriers as a whole have lauded the tight bond this year’s group shares.

“This team, in my six years, has been the most close-knit team that I’ve experienced,” Corbean notes.

Brittain-Watts feels the same. “This is for sure one of the closest groups I’ve ever played with,” he says. “My junior and senior year in high school we were pretty close, and this group, it feels the same.”

That connection, for Brittain-Watts, started months before the team ever officially came together. Fellow Terriers would text Brittain-Watts while he was still in high school, congratulating him on becoming an Indiana All-Star and shouting him out when he returned to the state championships during his senior season.

“It’s a brotherhood that I didn’t expect to be as strong as it is,” his mom says, “and I think a lot of that started before he got here with group communication. They do a really good job taking care of him.”

Brittain-Watts contributes his competitive fire to that brotherhood.

“I think he’s very unselfish,” Corbean says. “He’s willing to give up at times for others and allow the process to happen. So I think his teammates are aware of that and appreciate the fact that he comes in and works extremely hard and wants the best for the program.”

“I’m a team-first player, and I just want to win in the worst way,” Brittain-Watts says. “I hate losing more than I like winning, so it’s gonna drive me to do what it takes for my team to win, and when I’m out there I’m gonna give it 100 percent.”

Through this kinship, the freshman has also taken on a special role as the cultivator of elaborate handshakes. He has one with nearly every member of the roster, and according to Brittain-Watts, it’s a position he was destined to play.

“We shake up whenever we see each other, so it as really just natural,” he says. “That’s how it was for me in high school, so when I got here, it was just — like, we all gotta get handshakes.”

The Terriers make up a critical piece of Brittain-Watts’ strong support system. But the freshman also leans on close relationships he built back home. He still hits up two childhood friends regularly. And he credits his parents, who both work in education, for instilling a selfless mindset that supports four pillars: God, family, academics and basketball.

“[They] just were an example for me of what it’s like to work hard and what it looks like to kind of put your life into perspective – what things matter, what things don’t matter,” he says.

Michelle Brittain-Watts emphasizes “servant leadership.” She takes pride in how her son has shown development as a leader over his young life — from his on-court attitude, to his time as a middle-schooler volunteering as a coach for young players, to his senior service project, where Ethan organized a leadership camp for kids in the Culver community.

“He’s a very compassionate person and when it comes to seeing the needs of others, we just hope he continues to embrace that and support those that he finds could benefit from some knowledge that he has — to help someone’s livelihood,” she says.

Ultimately, a hunger to lead has helped bring Brittain-Watts to Boston. It also compliments his burning desire to win. Brittain-Watts made a checklist in middle school that set out his goals for his basketball future. Included on the list: making a high school varsity team, winning a state championship, becoming an Indiana All-Star, and earning a DI basketball scholarship.

So far, Brittain-Watts keeps checking off items on the list. Next up: make the NCAA Tournament. His “kill-or-be-killed” mentality might allow him to check that box.

“He’s a competitor,” Corbean says, “so that’s always gonna stick out as far as him wanting to succeed — not only personally, but wanting the team to succeed.”

As a leader and a competitor, Brittain-Watts hopes his example can inspire other young athletes to outwork their peers. To take the court with a radiant energy. To, as he says, “go out and take it.”

“I want to be somebody who kids can look up to and say, ‘That guy plays hard, let me play just as hard.’”