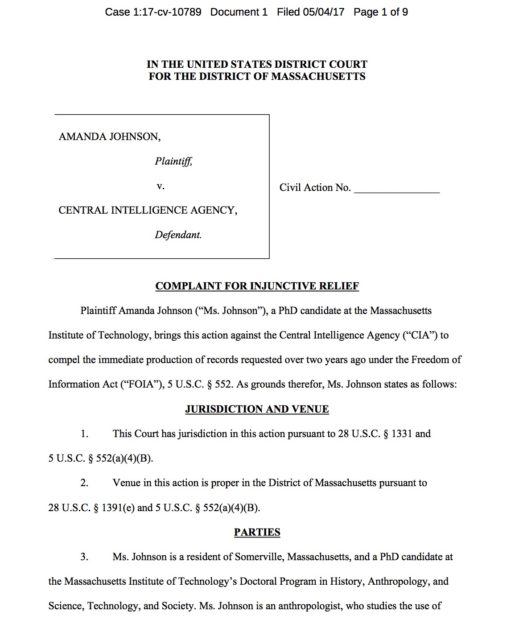 On Thursday, the Technology & Cyberlaw Clinic filed a lawsuit against the Central Intelligence Agency, on behalf of MIT PhD candidate Amy Johnson.

The lawsuit concerns a Freedom of Information Act request that Amy filed in December 2014, seeking information related to the CIA’s Twitter account. The CIA launched this account in June 2014, and it is now one of the few outlets by which the CIA regularly communicates with the public, where the agency posts information about speaking engagements, historical events, and other items of public curiosity.

Since its launch, the @CIA account has been subject of controversy and criticism, as it often uses humor and sarcasm when communicating with the public. (This included its first tweet, which was itself a joke about the FOIA law.) Critics and scholars have wondered why the CIA would decide to take this contentious and unconventional approach when communicating with the public online.

Amy is an anthropologist, and studies the use of humor and play in social media, with a focus on how governments use these platforms. As such, she is uniquely equipped to analyze the CIA’s approach with its Twitter account, and help contextualize it in the academic and public press. Using the rights she is granted under the FOIA, she requested that the CIA provide her with materials that the CIA uses to instruct or train agency personnel, the third-party apps used by the CIA to manage their account, and the correspondence the CIA has had with Twitter to set up and operate the account.

Under the law, agencies have 20 business days to respond to FOIA requests, though in practice nearly no agency meets that deadline. When Amy filed her request (with the help of the Harvard Cyberlaw Clinic), the CIA first indicated that they would produce the records within a few months. Since then, the CIA has refused to even acknowledge when they plan to comply with the law and produce the records, despite processing thousands of other requests that the agency received after 2014. For over two years, Amy tried to negotiate with the CIA to produce these records, and the CIA refused to cooperate.

The Clinic filed this lawsuit to force the CIA to honor the obligations of the Freedom of Information Act. As the lawsuit notes, the CIA has long passed the deadlines imposed by FOIA, and it appears that the CIA violated its own FOIA regulations, which require “first in, first out” processing of requests. As the complaint notes, there is evidence that the CIA has processed thousands of requests that were received after Amy’s request first came in.

“The CIA Twitter account is a rare governmental social media account — a latecomer to Twitter that launched with an astonishingly assured playfulness,” Amy said. “I filed this FOIA request as part of a larger project to understand how government agencies navigate the challenges of ‘being where the public is’ in a social media era.”

“Amy’s request is a clever and productive use of the rights afforded her through the Freedom of Information Act,” clinic director Andy Sellars said. “It is unfortunate that she needed to bring a lawsuit in order to get the CIA to follow their basic obligations under the law, but we’re glad to assist her and other students at MIT and BU who are exercising their rights to further their academic projects.”

Clinic students Gabriella Andriulli (BUSL ’17), Tavish Brown (BUSL ’17), and Wes Howe (BUSL ’17) worked on this litigation. Amy received funding to file this suit from the National Freedom of Information Coalition, through a grant from the John S. and James L. Knight Foundation.

You can read the complaint the Clinic filed here.