It has been claimed that some languages, including Mandarin, Japanese, Yoruba, Samoan, and Moore, lack so-called degree abstraction (a configuration at LF involving lambda abstraction over a degree trace). But upon closer inspection, some of these languages have turned out to have it, as recent literature has shown. Does every language have it? Is it, in other words, a universal? Or can we find solid evidence that some languages really lack it?

Starting with a closer examination of Mandarin spearheaded by BU PhD student Ying Gong, this project has developed a new set of eliciation materials for degree abstraction, including two storyboards drawn by BU undergraduate student Tomiris Kaumenova and applied to Moore (a Gur language spoken in Burkina Faso) by the whole team. We are currently in the process of analyzing those results. As a next step, we hope to refine our elicitation materials and apply them to Ende (spoken in Papua New Guinea in the Pahaturi River region) with the help of Professor Kate Lindsey.

Gong, Ying and Elizabeth Coppock (2021). Mandarin has degree abstraction after all. Talk presented at the 2021 Annual Meeting of the Linguistic Society of America. (Video, Slides)

If scalar implicatures depend on what alternatives are in the lexicon, do differences across languages as to what’s in the lexicon drive cross-linguistic differences in scalar implicature? Short answer: Yes! We show this through comprehension and production experiments across several different languages, including Spanish, Russian, Persian, and Arabic, based on the idea that the existence of thumb in English causes a finger-to-not-thumb implicature.

Computational modelling in the Rational Speech Act framework, furthermore, shows that listeners have a good understanding of the probability with which speakers will choose alternatives from the lexicon, and use this information in the computation (or non-computation) of implicatures.

As Haddock noticed, the rabbit in the hat succeeds in referring even if there are multiple hats; all that matters is that there is only one hat containing a rabbit. Haddock proposed that this was a natural consequence of incremental processing. Using nested definite descriptions containing gradable modifiers like the rabbit in the big/bigger bag in a series of Visual World experiments, we give evidence for Bumford’s scope-based analysis of Haddock descriptions, as opposed to one involving incremental processing. We also give evidence for what we call referential garden path effects, where the listener is thrown off by temporarily settling on the wrong referent.

Aparicio, Helena, Roger Levy and Elizabeth Coppock (2019). How to find the rabbit in the big(ger) box: Reasoning about contextual parameters for relative adjectives under embedding. Poster presented at XPRAG 2019, Edinburgh, June 2019. (Poster)

This interdisciplinary project between Linguistics and Computer Science aims to improve on the state of the art for natural language generation of referring expressions for objects in complex scenes.

We hope to combine insights from Rational Speech Act models with insights from deep learning and computer vision in order to generate referring expressions with appropriate modifiers.

The semantics and pragmatics of superlative modifiers

Expressions with superlative modifiers at least and at most have slightly different pragmatic properties than near-equivalents formed with more and less. This project seeks to demonstrate, understand, and model theoretically the various semantic and pragmatic differences among them, using a combination of traditional and experimental methods. The framework of Inquisitive Semantics plays an important role in the discussion.

In English, most and the most tend to mean different things. The former has a so-called proportional reading, the latter a relative reading. This project investigates the semantics of quantity words like many and few in their superlative forms (most, fewest), and finds that English is the odd man out when it comes to how these typically behave — normally the superlatives of quantity words do not give rise to a proportional interpretation. In our Language paper, we argue for a particular explanation for this finding, building on assumptions about the meaning of quantity words. 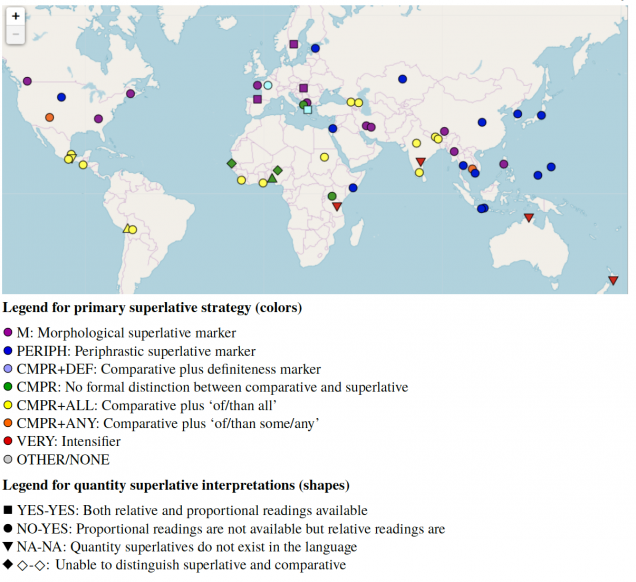 Not pictured: Christian Josefson and Linnea Strand (former undergraduates at the University of Gothenburg)

Coppock, Elizabeth and Linnea Strand (2019). Most vs. the most in languages where the more means most. In Ana Aguilar-Guevera, Julia Pozas Loyo and Violeta Vázquez Rojas Maldonado (eds.), Definiteness Across Languages, 371—417. Berlin: Language Science Press. (PDF)

Nouri-Hosseini, Golsa, and Elizabeth Coppock (2017). Storyboards vs. Picture-aided translation: A case study on the typology of comparison. Workshop on Elicitation Tools for Linguistic Description and Typology, University of Paris Diderot, November 2017. (PDF)

The semantics of definiteness

What does the mean, and what does definiteness-marking mean in other languages?

This is more of a theme than a particular project, comprising more or less separate projects on Hungarian, English, Swedish, and Turoyo (an endangered Semitic language).

Collaborators on various aspects of this issue:

Beaver, David and Elizabeth Coppock (2015). Novelty and familiarity for free. In Proceedings of the 2015 Amsterdam Colloquium. (PDF)

Object Agreement in Hungarian: In defense of a semantic solution. Keynote address at the 14th International Conference on the Structure of Hungarian, Potsdam, June 2019. (PDF)

Papers on these issues: