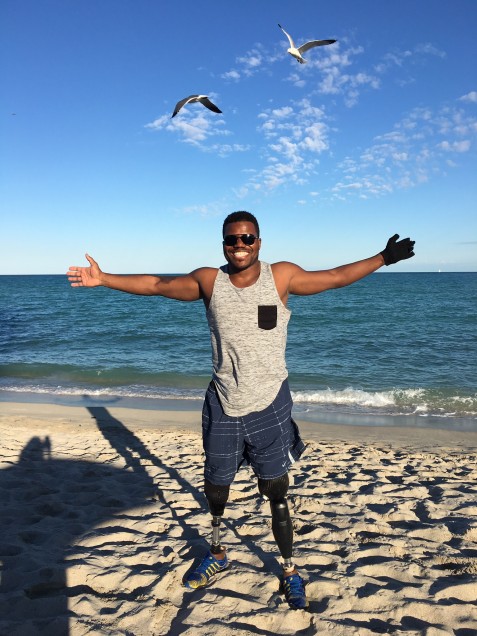 Mujahid (“Muji”) Karim recently reached a milestone – the five-year anniversary of a car accident that has completely changed his life. On August 21, 2011 he was the passenger in a car that lost control and hit a tree. The car exploded on impact and it took four Jaws of Life to get Muji and his brother out of the car that night. He flat-lined three times after the accident and was in a medically induced coma for two weeks. His legs and the fingers on his left hand were amputated due to fourth-degree burns. Muji, who was a Division 1 football player at UNH, faced an unimaginable and arduous transition; he went from being strong, agile, and independent, to learning how to walk again. After six months in the hospital, he was happy to finally be discharged, but he was forced to return multiple times due to health complications. While Muji knew he was lucky to be alive, he was frustrated by the fluctuating nature of the recovery process. Muji observes, “The setbacks were extreme disappointments for me… when you see something improving or your body starts to feel a little better, you get confident, and then when you have a setback it sort of erases all the progress you have made both physically and mentally. The setbacks and infections that brought me back to the hospital were a huge detriment to my psyche at the time.” Muji was used to his body being his rock – now his body wasn’t healing as quickly as he wanted.

The ebbs and flows of physical functioning coupled with the emotional and social ramifications of the injury make recovery after burn injury an extremely complex process.  Prior to the accident, Muji recalls being a confident guy. He always believed in himself and did not pay attention to what others thought of him.  That sense of self-confidence, however, was hard to maintain after the accident.  As Muji notes, “The problem was that I wasn’t that guy after this, that’s what bothered me more than anything. I cared about the fact that I was limping around and I cared that people were staring at me. I was self-conscious of how my hand or arm looked to other people. And that just wasn’t me at all, that’s what bothered me more than anything.”

Loneliness and challenges with self-image are common feelings experienced after burn injury, but having a support system can help ease these feelings.  As Muji recalls, “I kept having these dreams that I wouldn’t have any friends or that nobody would like me or that I was a lost cause.” But his friends stayed by him from the beginning. “They were asking the nurses all types of crazy questions,” Muji remembers. “It was them genuinely caring but it was still sort of so foreign to everybody. I grew up playing football with all these guys, playing basketball and doing all these things and then I lost my legs so it was big for them to wrap their minds around. Initially it was whether I was going to live or die so those were the questions they were living with while I was in a coma for two and a half weeks…and it’s not that they didn’t care that I lost half my hand and legs but it’s like he’s still alive and we’ll figure it out from here. That’s what I eventually got to but it took me awhile.” In fact, his friends were almost overly protective of him at first. Muji recalls, “I was always almost sheltered because of my friends. Anywhere we went I was with three or four of them, and these are big guys that I played ball with – big, big dudes – and they were always so protective of me.” Muji laughs as he remembered his friends offering to throw him on their shoulders to help him get around. Over time, he regained his independence and was grateful when he realized he was able to do more on his own.

Muji remembers feeling the love and support from people who had stood by him, but even more vividly he remembers the first time he smiled since the accident. George Pessotti, a burn survivor himself, and a facilitator at the Burn Survivors of New England support group, came to speak with Muji during his hospital stay. George is a warm and funny guy who brings out the best in people around him. He helped Muji believe that he would overcome the challenges he faced after his burn injury.  Muji recalls, “You know, I wasn’t cured by a long shot, but meeting George made me think maybe there’s a chance for me to get through this. He was the first person that I met who was a burn survivor.  I remember smiling a bunch when he was there and that was the first time I had smiled in weeks, and anyone who knows me knows that I’m cheesing all the time, so that was a huge milestone for me. As things progressed I started to meet more burn survivors, and then people with amputations, and now most of my friends are either burn survivors or amputees. It’s quite a group to be a part of.”

Muji was able to get back into his workout routine a few years after his injury. He first got a pair of running blades in September 2014, and he got his sprinting blades in April 2015.  Out of curiosity, he looked up the qualifying time he would need to try out for the Paralympics team. Less than two years after having his sprinting blades, he ran his first race and qualified for the Paralympics trials. Although he didn’t make the team this year, being able to try out was a great accomplishment. However, this achievement didn’t happen overnight. Muji points out, “My thing is that I had a lot of issues with being seen in public. I wouldn’t wear shorts, I would cover everything up. It was 90 degrees outside and I got a sweatshirt on. It bothered me a lot that I couldn’t move and do some of the things that I was so accustomed to doing. And then people judging and people looking at you…that took a while for me to be ok with. I’d actually say it took years to be completely ok with.”

While he recognizes that it is unrealistic to be positive all of the time, throughout his recovery his motto was to focus on the positive. He stays positive by reminding himself that the outcome of the accident could have been much worse.  After all, his doctors had only given him a 10% chance of surviving and there were five possible ways he could have died. His equation for positivity is simple – be positive 51% of the time, or four days out of the week. Muji maintains, “People throw it around and say ‘oh just stay positive’ and I think that helped me because I really started to think ‘what do I have to be positive about?’ Then the doctor explained to me that there were five ways that I could’ve, and probably should’ve, died that night. So that’s what I held onto for a while. I think a good question to ask yourself is ‘what do you have to be positive about’ and then it’ll snowball into more and more things.”

One of those things that keeps Muji positive is his growing family. His fiancé gave birth to a little boy in July 2014. His son was born at Brigham & Women’s hospital in Boston, the same place where Muji spent his first two months after the accident. Muji noted, “It brought everything completely full circle because I had been in that hospital three years earlier dying. I remember the night he was born, I went up to the 8th floor, the ICU unit, and sat and talked to some of the nurses and it brought everything back, just being grateful for the opportunities that I’ve had since.”

Thank you Muji for contributing your story for the first edition of this series.