The CuPID team has gotten the ground station computers and accompanying software prepared for launch on Monday the 27th! After spending two days fighting with motors on the antenna, the ground station is fully functional and ready for PI Brian Walsh to establish contact as soon as we get orbit information! 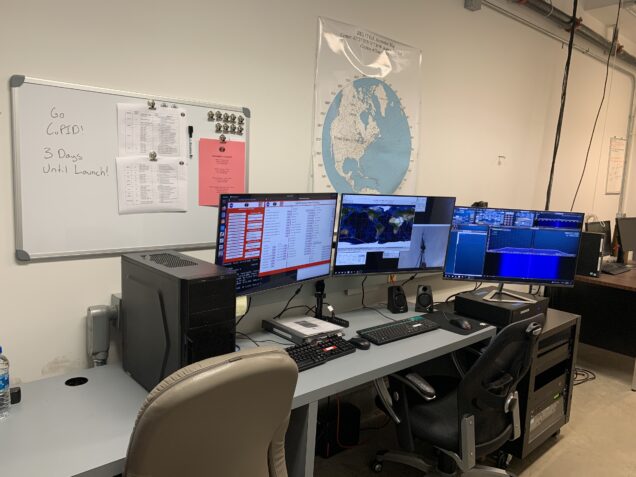 The CuPID ground station with screens for satellite commanding and telemetry, orbit and tracking, and a radio spectrum analyzer.

Integration at Vandenberg Space Force Base!

Last week, CuPID was integrated into the flight deployer and ESPA ring at Vandenberg Space Force Base in Lompoc CA. The team hand carried CuPID over commercial airline to LA, and then via rental car to Lompoc. Integration went smoothly, there were no problems with cleanliness checks, travel, or the integration activity. CuPID now waits, inhibited, inside its deployer as the assembly is mated to Landsat-9 and mounted onto the rocket for launch! 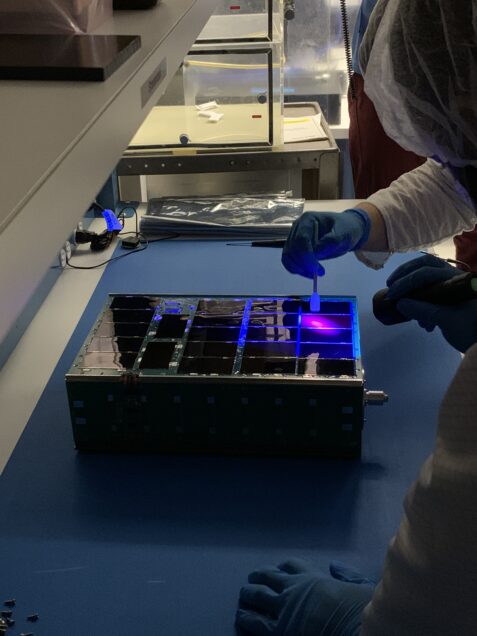 A NASA cleanliness team visits the BU lab to perform a visual inspection of the satellite, as well as take tape lift samples and no-volatile residue samples for cleanliness verification. 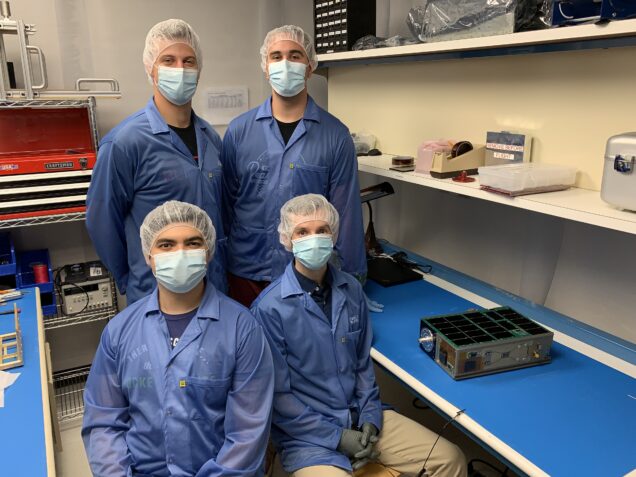 From top left, clockwise, Emil, Connor, Brian and Roue pose with CuPID on its last day at BU. 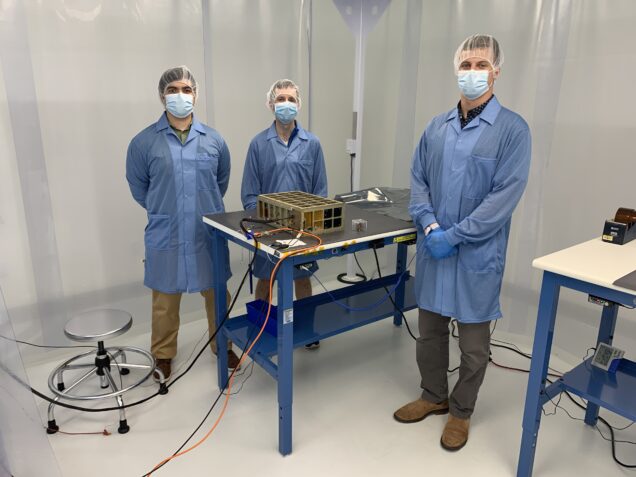 After traveling across the country, CuPID gets checked for damage, and software is given a final once over. Most importantly, CuPID is set to communicate over the radio, not ethernet!

Unfortunately, photos from the integration event are for not cleared for public release at this time.

Last week, requirements for the Cubesats riding on this launch changed unexpectedly. We were required to re-test the satellites to higher vibration levels to guarantee that our satellites will behave during launch, and will do no harm to the launch vehicle.

On Friday July 2nd, with incredible assistance from our co-workers at NASA, we performed a vibration test at Wallops Flight Facility. CuPID did phenomenally, and really proved itself on the vibe table that day!

Check out some of the cool stuff that came from that day of testing! 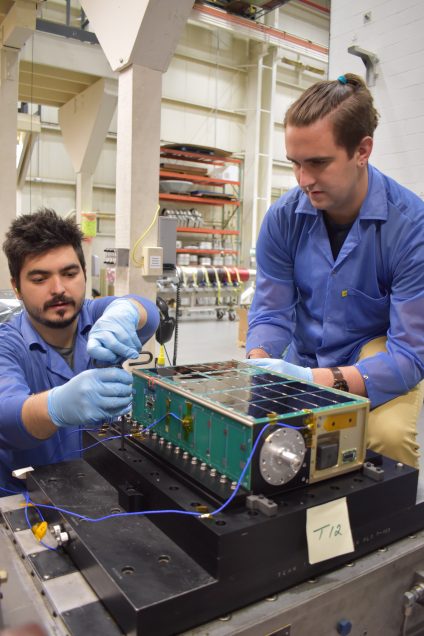 Rousseau Nutter (left) and Connor O'Brien (right) tighten down the screws that mount CuPID to the vibration table.

Video: CuPID tests the X-axis random vibe. We increase the power of the shake from -20dB to -9dB then -3dB and finally 0dB to observe if something would warrant the termination of the test. (0dB is the full power of the test). Listen to the sound of CuPID as it goes through the test! The video does not to the sound justice! 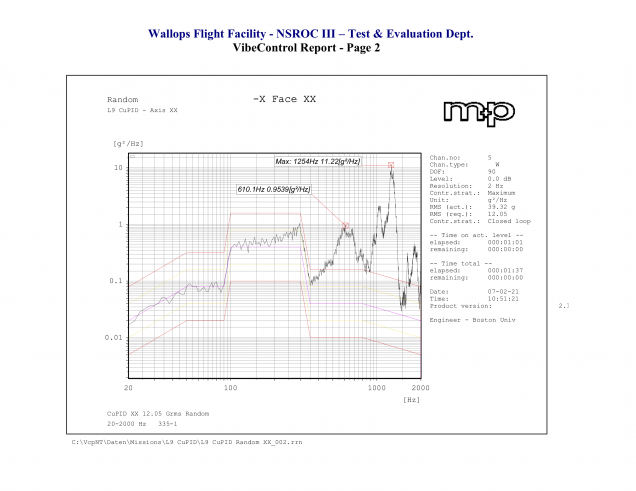 Example data from CuPID's X-axis vibration test. The axes are log scale. X-axis is driving frequency, Y axis is the acceleration spectral density (ASD)... aka how hard the shake is. The purple line is the target driving, and the black line is CuPID's response. Our first resonance is at 610 Hz which means our spacecraft is one solid cubesat!

Last week, CuPID underwent vibration testing as part of its environmental test requirements from the launch provider. CuPID survived the extreme vibrations we gave it, and showed nominal operation after the test. 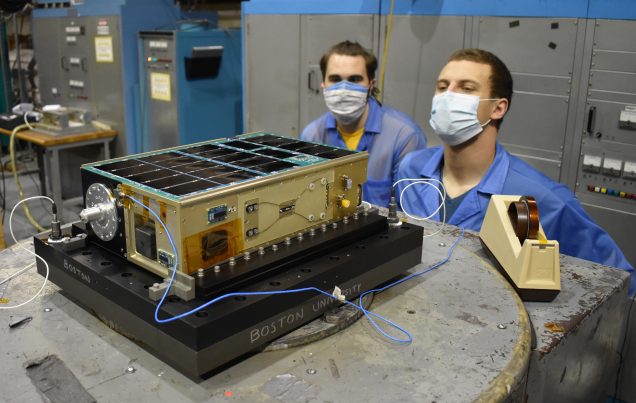 Accelerometers are mounted to the vibration plate to define the driving forces, as well as specific location on CuPID to characterize CuPID's response. CuPID was tested three times in each axis, a total of 9 vibration tests. The tests include a sine sweep, random vibe, and a second sine sweep. 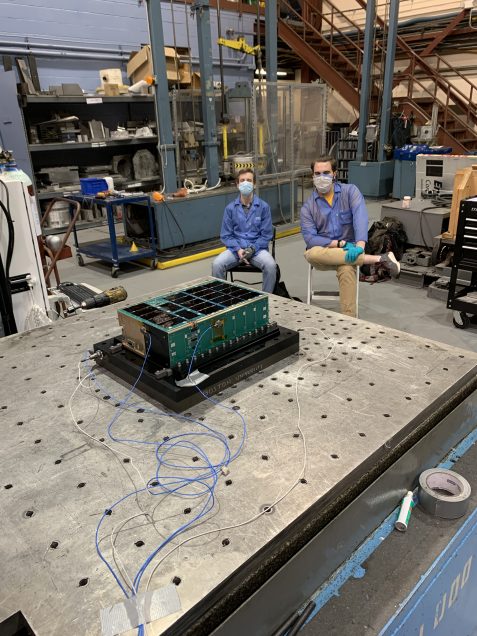 The testing must go on!

Individually, CuPID's structure and electrical components have been tested, but now integrated, we are requiring CuPID to go through many more tests to fully confident that CuPID will work as designed once in orbit. From just confirming functionality of all sub-systems to calibrating the instruments, CuPID has been spending a lot of time running.

Earlier this year, CuPID was at GSFC undergoing some X-ray calibration tests. A 2.5 meter long beam line was set up to calibrate the point spread function of the optic and detector. 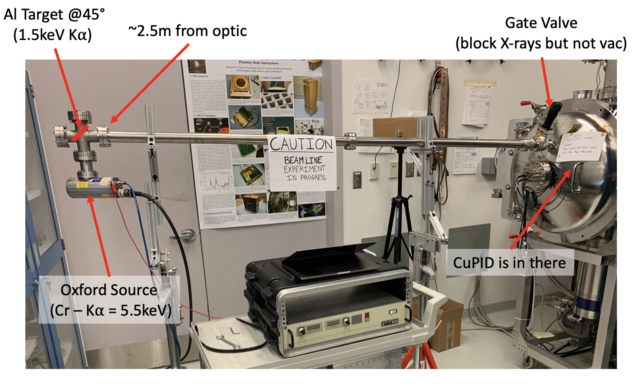 Then, just before the Covid-19 stay at home orders, CuPID was 'evacuated' out of the GSFC lab before a shutdown could have locked CuPID into long-term storage. CuPID and its drivers made a safe one day trip to the BU lab. 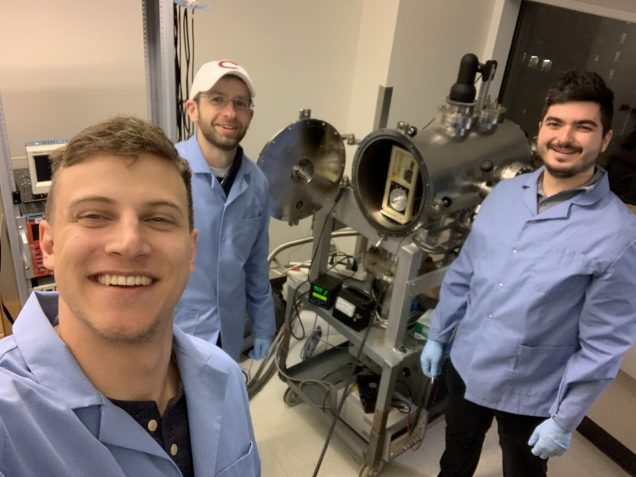 Under lab access restrictions, the BU team is allowed to continue to work on CuPID. CuPID is undergoing tests to calibrate the X-ray detector to a known image. These tests involve generating a known image, or mask to cover the Micro-Channel Plate (MCP) detector and processing the data to determine response and conversions from instrument results to physical measurements. 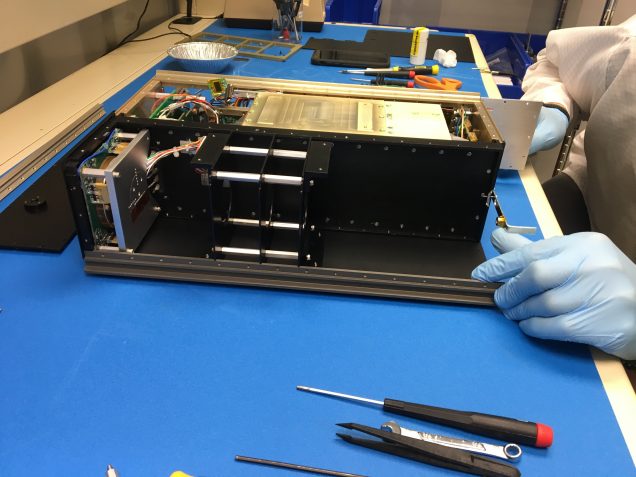 CuPID in the clean tent receiving the mask and source to generate known image on detector.

CuPID and the team working on it are safe and healthy during this unstable time.

In the recent weeks, the CuPID chassis and avionics met for integration. This process involved mounting the avionics into the chassis and then wiring all the components together through the spacecraft. After many hours of work with screwdrivers, wire crimpers and lacing cord, we powered the spacecraft on. With much anticipation, everything checked out! Sun sensors, thermistors, and instruments (no high voltage yet, but soon) all powered on and operated nominally!

Lisa and Ariel mount the avionics into the chassis with smiling faces as screw holes line up and clearance tolerances are met! 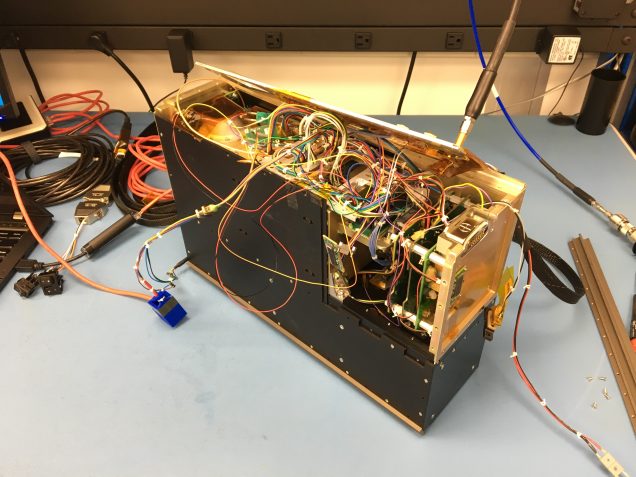 Wiring of a CubeSat is a great challenge because of the tight spaces and many sensors. 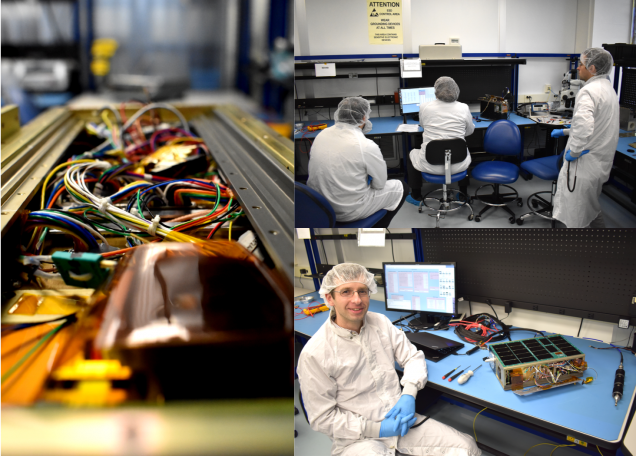 The avionics and wiring integrated into CuPID as well as some of the team working and posing with the integrated satellite.

CuPID was transported from the clean room where integration took place, to the vacuum chamber in a building nearby. In this vacuum chamber, the CuPID X-ray telescope high voltage will be powered on under vacuum. A report on testing coming soon! 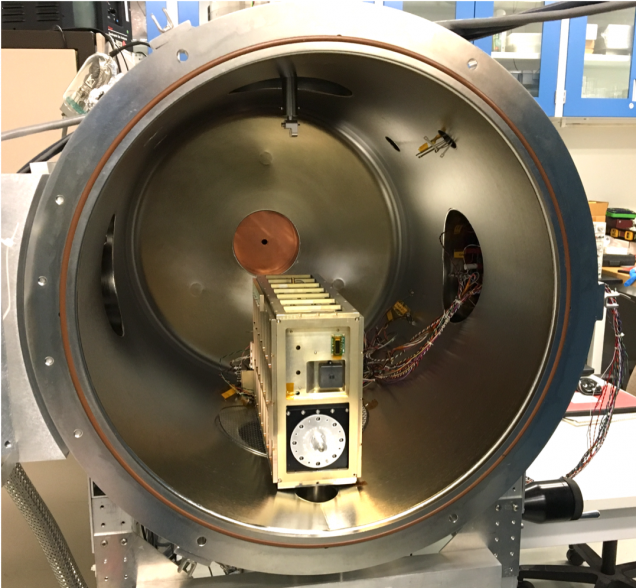 CuPID is stored in a vacuum chamber under vacuum to protect the delicate sensors. Here it awaits testing!

Let the marathon of spacecraft and instrument testing before launch begin!

Optics in a telescope are just like glasses to improve someone's sight. In the case of visible light, the glass lens refracts the light to the desired pattern. With x-rays, the optics can only deflect the incoming  light because the x-rays would pass right though! These optics, called slumped micro-pore optics, and are an array of lead-glass channels that are slumped over a spherical surface creating a grid of square channels that point radially outward from a sphere.

This type of optic is very delicate, so until now, assembly and testing of other flight components has been done without the optic. Though, recently it was installed into the CuPID Cubesat for the first time at Goddard Space Flight Center.

Below, Nick and Ken from GSFC assemble transfer the optic from its storage assembly to the flight chassis assembly. CuPID was given its glasses that day! 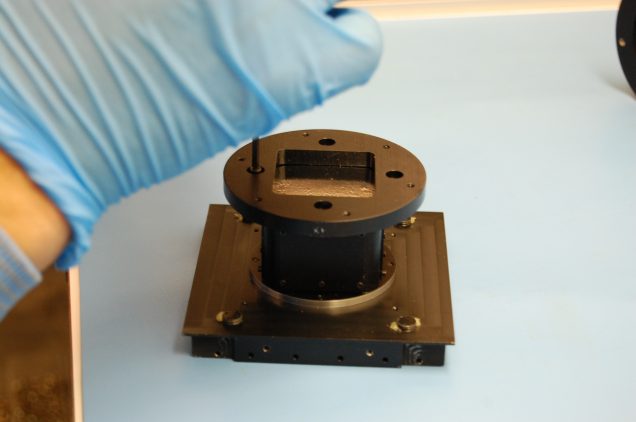 Nick removes the storage housing for the optics. The optics are the silver square at the center of the piece. 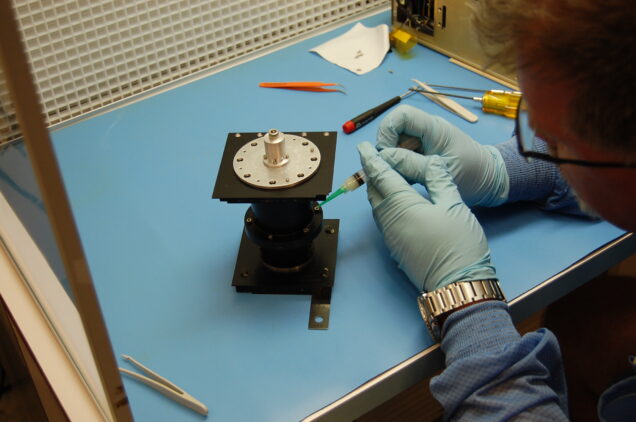 Ken applies a coating to screws to stake them down from unscrewing during launch vibrations. A vented "remove before flight" cover is added above the optic.

The instruments meet each other!

This week, Brian, Jef and I delivered the CuPID micro-dosimeter to Nick , Norm and Michael at Goddard Space Flight Center where the CuPID chassis and X-ray instrument currently reside. Until now, the instruments have been built and tested separately. After some individual testing that morning to document functionality, the instruments were integrated into the chassis and mounted inside a vacuum chamber. 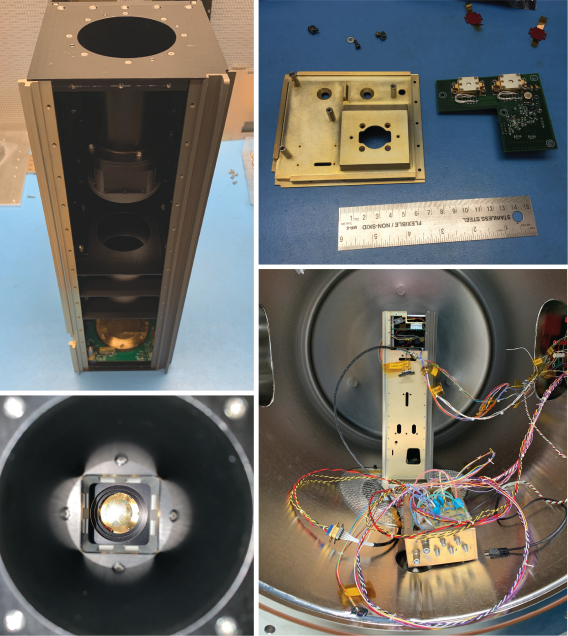 The instruments as they are installed in CuPID chassis. Top Left: The X-Ray telescope from the side. Top Right: The micro-dosimeter suite dis-assembled. Bottom Left: The view down the optical axis of the X-ray telescope looking through the magnet array and light baffles to the MCP detector. Bottom Right: The chassis and instruments in the vacuum chamber to begin testing!

After being seated in the vacuum chamber, the instruments were powered on and data from each instrument were collected! The instruments both operated nominally and produced data to the spacecraft bus emulator which combined data into files that will one day be sent from orbit to ground!

Left: Emil and Nick deliberate over instrument wiring to the computer. Right: Brian, Jef and Norm intensely watch instrument data come through the spacecraft avionics emulator. Every test was a success!

I like to joke that it was an instrument love story planned from the beginning and this was their first date! They behaved well!

CuPID at the GEM Conference!

Recently, at the end of June, the CuPID team from BU presented at the Geospace Environment Modeling (GEM) conference in Santa Fe, NM. Our Principal Investigator Brian Walsh presented the mission to a conference session focusing on magnetic reconnection. PhD student Emil Atz presented the CuPID instruments during an evening poster session and won the poster competition for the research area!

Overall, the conference was a great success with plenty of science, learning, collaboration and fun! Special thanks to the organizers and the NSF for another great GEM Conference! 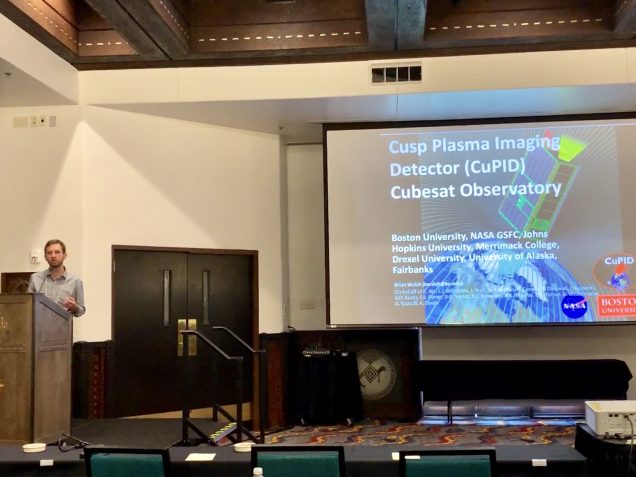 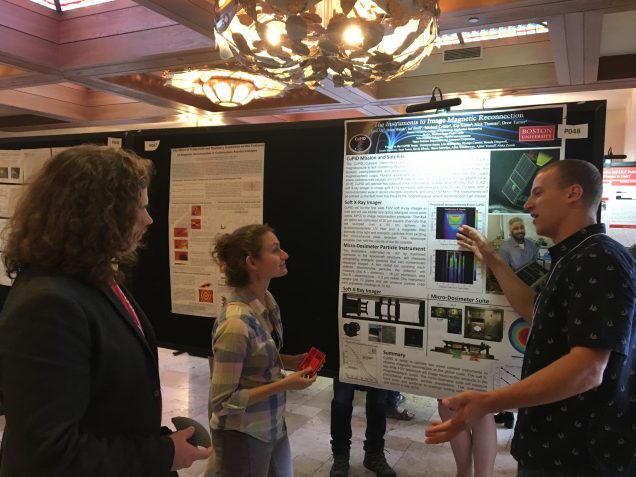 Emil Atz presents a poster about the two instruments that will fly on CuPID.

It is a Flight-Unit CubeSat!

This week, the CuPID team finalized the chassis structure, and began to test how components would integrate onto and into the chassis. At Boston University, we tested the solar panels on the chassis, both in fitment and performance. Below, Thompson Cragwell, an engineer in our research group proudly holds our flight CuPID chassis and largest flight solar panel. 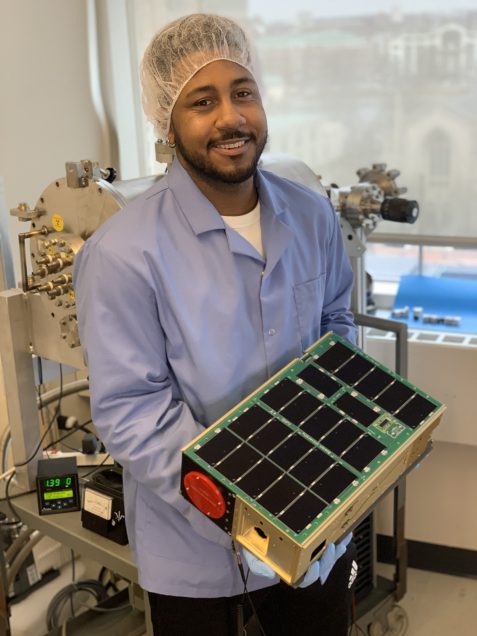 In Maryland, at Planetary Systems Corporation, CuPID was inserted into their Canisterized Satellite Dispenser (CSD), which will be used to eject the satellite from the rocket after reaching orbit. Check out the video below of catching the satellite as it is shot out!

At our collaborators, Adcole Maryland Aerospace, we tested the fitment of their avionics components in the chassis. The avionics, dosimeter, GPS antenna, and radio antenna fit beautifully into their designed spaces. Next step: Final integration and testing!!!! 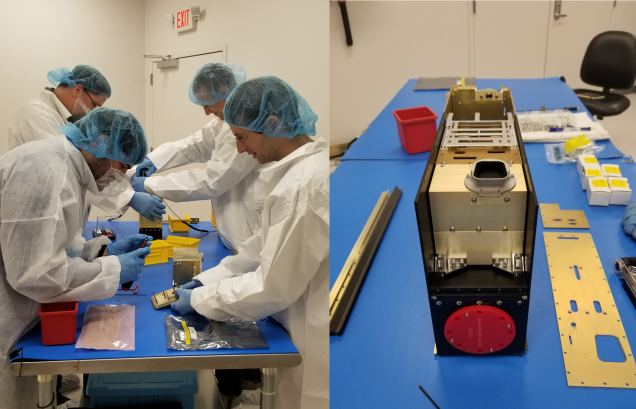