How many times have we engaged in a ‘lively’ political debate on Twitter? How many times have we tweeted our absolute passion for a certain cause on Twitter? How many times have we followed a global event through a live-tweet instead of watching it on television or listening to it on the radio? Most of us who actively use Twitter must’ve done one or more of these actions ever since we used Twitter. On a positive note, Twitter seems to empower democracy, giving people a platform to voice out their opinion and engage in a vibrant conversation. However, at what cost? Rainie & Wellman (2014) mentioned that:

“In the age of the Triple Revolution, anyone with an internet connection and a bit of digital literacy can create online content that has the potential to reach a wide audience. With all the different forms of creating content and the increasing ease with which people can do so, the boundaries between producers and consumers are becoming blurred in the network operating system—with noncredentialled amateurs participating in many of the areas that were once limited to recognized and sanctioned experts” – Rainie & Wellman, Networked: The New Social Operating System (MIT Press).

This statement is also echoed by Klinger and Svensson (2015) who stated that “The content in social media is comparably inexpensive and generated by all users, journalists, and others alike, ‘according to their individual preferences and attention maximizing.’” Also, John Naughton (2013) in his opinion piece for The Guardian also stated that Twitter could turn “ordinary” people into broadcasters. This mediated environment afforded by Twitter, in turn, created six distinctive conversational structures and network crowds: divided, unified, fragmented, clustered, and inward and outward hub as explored in Mapping Twitter Topic Networks: From Polarized Crowds to Community Clusters research by Smith, Rainie, Shneiderman, and Himelboim (2014). In this essay, I am going to analyze two type of network crowds sitting at the opposite end: the polarized crowd with a divided conversational structure, and the tight crowd with unified conversational structure.

The Twitter Anecdoche: Everyone is Talking but Nobody is Listening 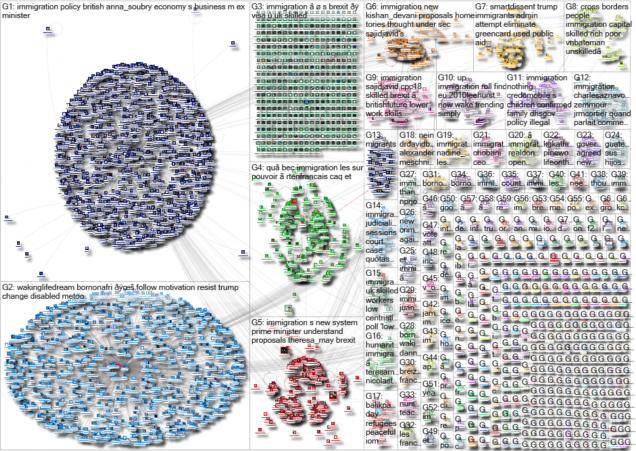 The first network crowd that I am going to analyze is the polarized crowd. The network crowd graph I chose is a conversation about immigration issues, tied to the immigration hashtag as the main hashtag and several other related hashtag and keyword. As mentioned by Smith, Rainie, Shneiderman, and Himelboim (2014), if a topic is political such as immigration, it is common to see a polarizing opinion between two different crowds on Twitter, and these two crowds usually do not interact with each other. These two crowds also refer to an opposite polar of website URLs when it comes to backing up their opinion.

From the graph above, we can see two different large group with no connecting edges between them, and we can also see how the edges are quite thin, indicating that the connection even inside the group is not very strong. The key influencer in the first group (referred to as G1) is Anna Soubry, a politician from the British Conservative Party; she’s also the most-replied to account for the G1 and entire graph. On the other hand, the key influencers in the second group (referred to as G2) includes accounts like @wakinglifedream, @swimomom, and @joankoptis. A brief look at the G2’s key influencers Twitter timeline and we can directly see how these accounts represented the left-wing liberal group, the polar opposite of the G1’s conservative. We can also see the contrasting difference by analyzing the keywords used by each group. G1 most used words included words such as “immigration” and “policy” while the G2 most used words included words that are associated with the resistance against the conservative group such as “resist”, “change”, and even word like “me too” that is unrelated with immigration but in a way associated with the left-wing group. The above analysis fits the description about the polarized crowd as stated by Smith et al. (2014) on how this crowds are not arguing with each other but ignoring one another while backing their argument with different sources and hashtag. Judging from the little connection between the two group, it can also be said how we rarely follow, retweet, reply, and mention people from the different group, resulting in a biased point of view about certain issues. I argued that this could be tied with Smyrnaios (2018) statement about infomediation. Hagel III and Rayport (1997) stated that infomediation is “connecting information supply with information demand and helping both parties involved determine the value of that information”, there are supplies of different information for both group because both groups have a different information demand to voice out their opinions and find a justifiable argument for their opinions. Twitter supplies the user with news, but, there are millions of news circulating on Twitter every day, and the user has to sort and filter what kind of news serve their purpose thus Twitter acts as a news infomediaries by filtering and distributing the news that serves the demand of its’ user. The question now then, is it possible to bridge the divide between these two group and is it possible for them to hear each other out and foster understanding between two different ideas and opinions by utilizing Twitter’s algorithm to spread news unbiasedly towards the different group? 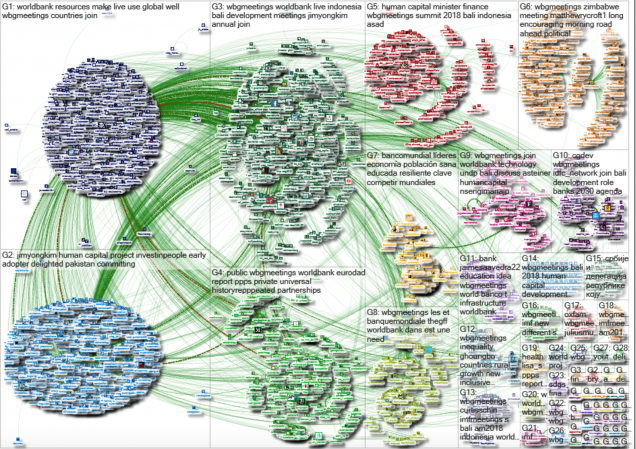 Another graph that I will analyze is a graph about 2018 Annual Meetings of the International Monetary Fund and the World Bank Group or the WBG Meetings. At first glance of the graph, it can be seen that it represents tight crowds with a unified network type – a common type that can be seen when there are close communities such as conferences and the member of the network connect strongly with each other and shared information, ideas, and opinions. The top influencers included the official Twitter account of the World Bank and the account of Jim Yong Kim, 12th President of the World Bank. Although there are several groups of networks, the edges show how there is a high and strong interaction between the group as can be seen on the similar words and hashtags such as #wbgmeetings
#investinpeople, #pakistan, #imfmeetings, #am2018bali used by these different group.

So what shapes the structure of the network? Is it because of the infomediation infrastructure or is it because the content of the tweet itself and the user’s choice to see what they want to consume and what they want to share and how they interact on the platform? I would argue that both played into accounts, without a platform like Twitter as an internet oligopoly, networked creators might not have a platform to shape this network, and the network might not even exist in the first place.