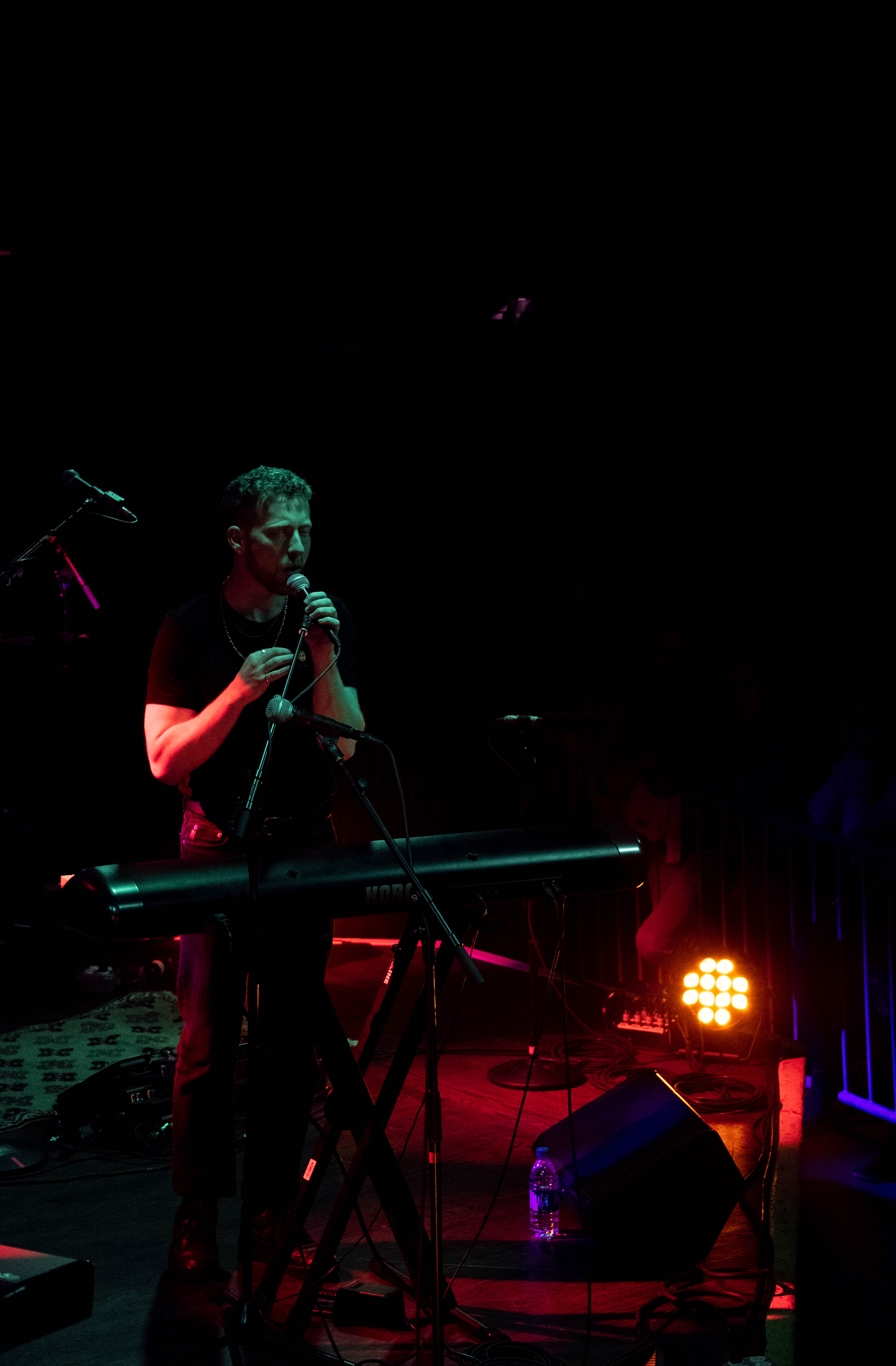 WTBU DJ Dija Munawar chatted with Noah Kahan ahead of his show at Paradise Rock Club in October.

Dija Munawar: You came to Boston earlier this year. How did this weekend’s performance differ from your previous one?

Noah Kahan: The last time I was in Boston to perform it was over the summer when I toured with James Bay. This past weekend I was headlining, so I would say that’s the biggest difference. I got to play my whole hour and a half set and I knew that the people there [this past weekend] bought tickets to see me, so I got to be myself a little more, and it was really special that I got to play all of my songs to really show who I am to the crowd and let that resonate with them.

DM: Have you noticed if crowds are different amongst the different cities? For example, do Boston crowds stick out because you’re from around here?

NK: Boston shows are very different because playing Boston means that all my friends come and it’s me getting heckled a little bit. I get to be myself with the crowd and tons of memories are brought up. The energy is cool and a lot of my songs and relationships reference Boston and where I’m from, Vermont, and it’s interesting hometown energy for me… playing in Boston is always special.

DM: Tell me a little bit about your motivations behind writing “Cynic”. Was it scary to write? It seems like it’s mostly about your mental state, and personally I feel like that would be terrifying to let out into the world.

NK: Writing “Cynic” was definitely challenging because it was a very specific song to my experience, and I wrote about alienation and anxiety that comes with that, but it was something I felt like I needed to get out. It was cool because I wrote a song about this negativity and cynicism I had about the music industry and that I should create a single about it. I felt like I shouldn’t always have to be positive about it, but serious and real about my experience. It was a refreshing experience and definitely frightening at first as well as a daunting challenge.

DM: Speaking specifically about Busyhead, I noticed a theme throughout it to be identity crisis—I wanted to ask if I’m correct in saying that, and if I am, then what triggered it, and how did you manage your identity crisis?

NK: I think just having to face who I am in the music industry and find out how to market myself as who I am and who I want to be as an artist, and who I’m going to be as a person and how I’m going to do and manage those things as variables. I wanted to explore those feelings and write about what I’m going through. I wanted to write about the crisis of self both professionally and personally, so it was kind of a culmination of those thoughts.

DM: Going off of that, you tend to write about your intimate feelings. Do you start songwriting immediately after something happens, or do you let the feeling and situation simmer and ruminate before writing about it? What’s your songwriting process?

NK: The things that happen to me manifest themselves into song unexpectedly and sit in my brain a little bit and my life and in my psyche. When I do write, I try to write honestly every time and let it come out naturally. I try not to be like “I have to write about this crazy thing that just happened to me” and live in this weird loop of waiting for an experience. I also don’t think that some things need to be immediately written about… sometimes you can’t write about thing if you don’t understand them and give perspective to your mind. I just let it sit around and let it happen naturally and write about the experiences that are ready to be written about instead of trying to force anything right away.

DM: Your music tells a story. How did you develop a taste for storytelling—or is it more of what you were saying how the words are going to come to you when they’re ready to come out?

NK: I grew up listening to artists who told stories: Paul Simon, Cat Stevens, The Lumineers—people that could tell a story and make it feel relatable and also specific to the experience. I realized through my songwriting that I’m a huge lover of literature, film, and podcast, poetry… I love storytelling and I think it’s the best kind of form of writing and the art that is and try to make sure that I tell a story too just because I am living a story, and I think it’s important to share that through your music, and speak your truth, I guess, into the world. And I want to do that the best that I can.

DM: What’s the toughest thing to write and sing about? Or if you’ve already crossed that bridge, then what was it like performing that in front of a crowd?

NK: A song I’ve written and performed live would be “Carlo’s Song,” which is a song I wrote for my friend who passed away and I loved a lot. Writing that was hard because you have to memorialize the person in a respectful way to yourself, to your memory of him, to the family, and their memory of him. I try to approach that song carefully so that I say what I wanted to say and I say it the right way and to make sure that I was doing justice to my buddy. Playing that song live is wonderful because I feel like I remember him every night and I feel like I keep his memory alive with me when I play that song and I think people connect their own memories of grief to that, too, which has been the most wonderful result of that song being recorded and played. I think his family really liked it and I think they believe I did him justice—I feel like I did, and that’s important to me.

DM: One of my favorite songs is “Mess”. You have a really interesting line it in that has to do with being able to decipher what’s important from what’s unimportant—is this a fear that you have that’s caused by gaining fame and traction, or elsewhere? I’m wondering where it come from.

NK: I think the more I’ve gotten into the success-side of things and the results of those success of my career—which have been great and I’m so grateful for them—there’s a lot of bullshit that comes with it. I see it, and I know that a part of my wants it, but the part of me that started doing this wouldn’t care about it, and I want to invest in writing about deciphering between what matters to me , what always mattered to me, and what matters to me now, and why that matters to me now, and do I need this… it shouldn’t matter to my now. I’ve thought about leaving it all behind and coming back home and still be the same person. If I could be the same person I was when I got into the music industry, would I go home and give it all up is the question. If I could just leave everything I knew and just leave all the shit going on in my life… if I could leave it all behind…is a question I think about.

DM: If you could create a band by hand-picking individual artists dead or alive, who would you pick, and what type of music would you create with them?

DM: Would you be opposed to being given songs by other people to use, or is the writing process and what you sing so special to you that you wouldn’t even consider that?

NK: I’m actually doing that right now. I did this song that got pitched to me… I used to be very pressed about it and I loved writing all the songs I’d do, but sometimes it’s cool to try something new and not feel like I have to be so attached to the process. You know, the more you write and put yourself out there, the more you set yourself up for criticism and self-deprecation, so I took a song this summer that I didn’t’ write, and it’s going to be released at some point. It’s an EDM record, but it was unique and I’m trying it out and giving myself a break to not be so critical of myself and not always be a part of the process. I don’t want to make a pattern out of it, but it’s something that I’m willing to do if the right song comes along.

DM: When you’re going down that rabbit hole of self-criticism, is there a mentor or someone you look up to help you through that, or do you mostly internalize it?

NK: I think I internalize it for a while, and I don’t have a great poker face. I think those feelings of getting into a rabbit hole and spiraling just manifests itself. I have a lot of people in my life that I love and talk to—my fans are so great and my mom and dad are so great, my manager, my songwriter friends—I think the life that I live is one that is unique but not so unique that other people are living it too and I have lots of friends who are going through a similar thing of craziness. I have folks that I can talk to who give great advice in those spiraling moments, for sure.

DM: Do you hope to evolve as an artist or do you want to stay the way that you currently are?

NK: I think what I’ve done so far, I’ve let it happen naturally, so I think letting everything happen naturally is what’s going to work for me. I’m not going to force evolution. I hope my music grows with me and that people give a shit about my music and if they don’t I’ll go through the necessary steps to be better. I don’t know I guess I’ll see. The music follows who I am and becoming a better person is my goal.