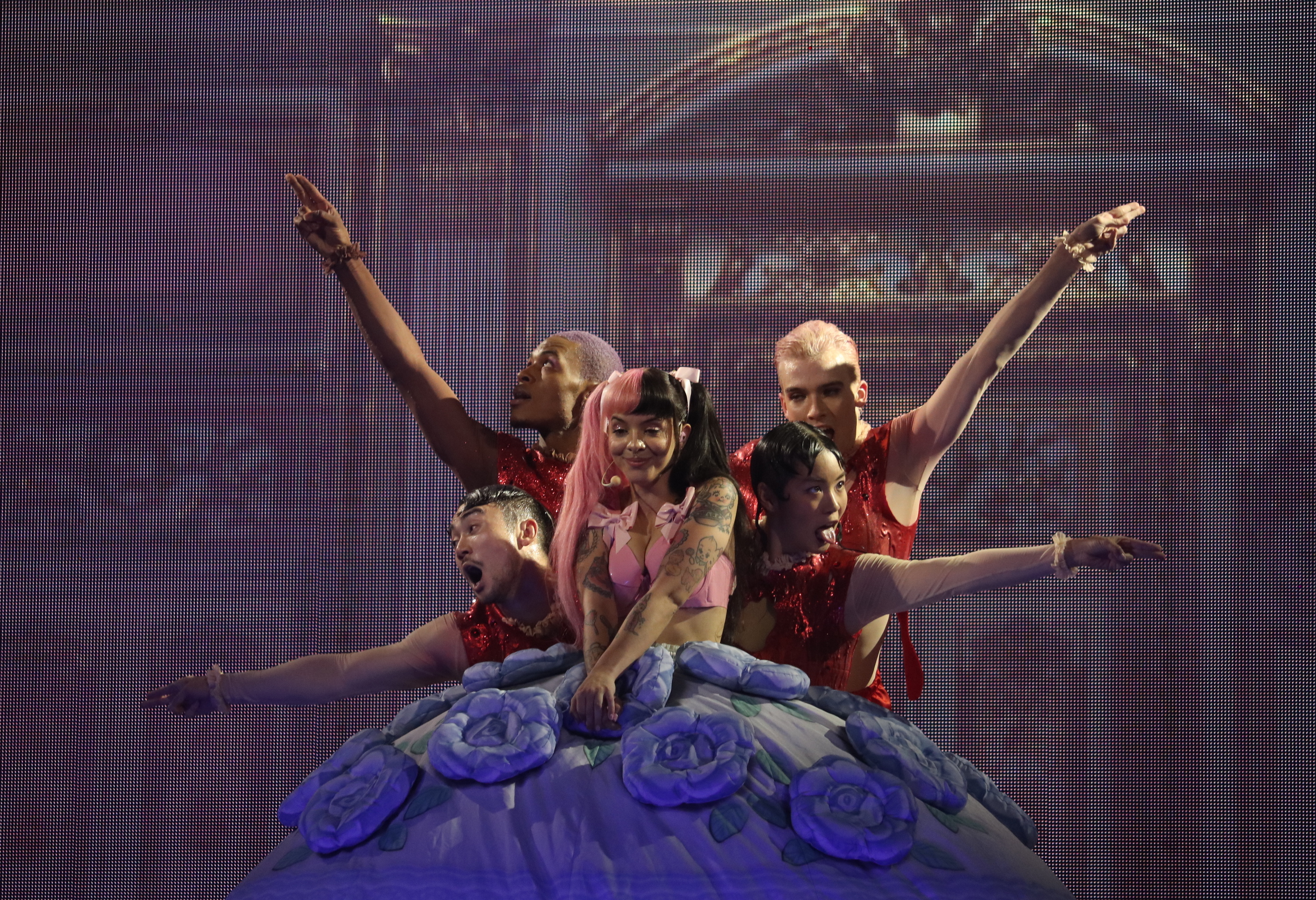 When Melanie Martinez released her recent album, K-12, it was a little disappointing to see her “eerie baby doll” aesthetic becoming repetitive. However, because this album was continuing her character Crybaby’s story, it made sense why she was continuing this aesthetic. The film she released alongside her album was an interesting way to visualize her music but her performance on October 20th was what made this album stand out.

The massive screen that served as a backdrop for the stage displayed videos of clouds. Fog machines were used to mimic the clouds off-screen. The attempt to make what was happening on screen come to life didn’t stop at the visuals, the air surprisingly began to smell like bubblegum. The use of a citrus scent during her performance of “Orange Juice”, was unusual yet ingenious.

The next time, the screen and the lights came back on, Melanie and six dancers were standing on a platform shaking up and down to imitate the bounce on a school bus. They were dressed in pastel-colored dresses and pants, fitting the childlike aesthetic. The audience’s cheering turned into singing when Melanie started the show with her song “Wheels on the Bus.”

After the first song, she transitioned to her song “Class Fight”. Instead of an abrupt transition, there was a fade into silence and flickering blue stage lights. For those that watched Melanie’s K-12 feature film, it was clear that these blue lights were meant to represent the scene where the school bus derails off of the road and submerges underwater.

The show was incredibly interactive, but it was much more than asking the crowd how they “were doing tonight.” The principal from the film came out, yelling and demanding the audience to sit down as if they were students. Later on, two dancers pretended to write notes, tearing pages out of the notebook, crumbling them up and throwing them into the crowd. This form of interaction served as a fantastic way to keep the audience engaged during song transitions and set changes.

There was a conscious effort to promote a safe environment for concert-goers. The screen would often cut to a “substitute teacher,” Ms. Victoria, speaking directly to the audience. She presented a set of rules or “bus etiquette” throughout the show. The first rule was to respect one another and their space, a critical reminder for general admission concerts. Ms. Victoria would instruct the audience to turn to high five or hug the person next to them, as well as  remind them to find validation within themselves. Though a tad cheesy, the messages resonated with me and it was an empowering reminder. These messages brought notable smiles to her young audience.

Props and choreography were in almost every song. From performing in a gurney during “Nurse’s Office” to a child’s bed in “High School Sweethearts,” the props were there to help her film and album come to life. The costume changes were frequent, elaborate, and fitting. That being said, her show often felt like a theatrical performance rather than a concert. Nevertheless, given that these “add-ons” fit the purpose of her concept album, I found it inventive.

Before coming back on stage for her encore, noises of a baby crying began playing, immediately the audience began screaming. Martinez came out wearing a costume and performing a song from her Cry Baby era. This section of the concert was less heavy on props and more focused on Melanie and her vocals. Melanie would point the microphone towards the crowd and they eagerly shouted back the lyrics. The encore showed the audience would be just as engaged had she performed without all of the bells and whistles.

Melanie’s final song of the night was an unreleased song by the name of “Fire Drill.” As she was performing this song, the screen showed an image of a notebook with the words “After School” written on it, perhaps hinting at her next album.

The K-12 Tour is more than a concert; it is a whimsical, well-thought-out, and intricately designed show. The costumes, props, and choreography are well balanced with Melanie’s vocal performance – it was well done so that it did not take away from her music. The same story that was told in her album and feature film was successfully developed throughout her show. The mature messages and themes from her music like bullying, respect, and positive self-image were stood out in contrast to her innocent childlike aesthetic.

Melanie Martinez’s American leg of the tour ends on November 20th in Seattle. Her album is available for streaming and purchase. Her feature film, K-12 is also available for purchase on YouTube. Melanie has confirmed she has two new films in the works as well as albums to go along with them. Surely, Crybaby’s story has not come to an end.