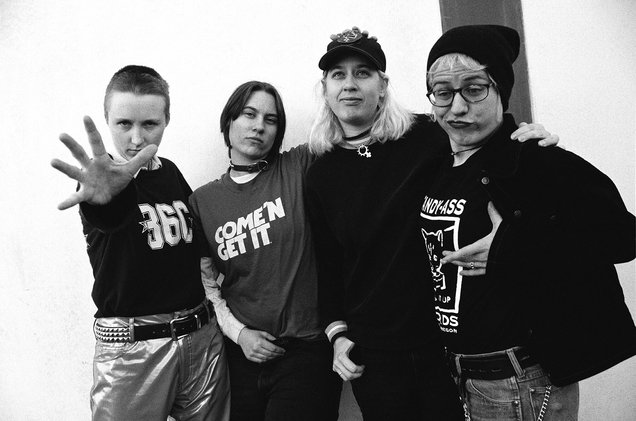 Of all the music venues in Boston, ONCE Lounge & Ballroom in Somerville has the supreme distinction of feeling like a raucous bingo night and awkward bat mitzvah social could happen at any moment, maybe even at the same time. Barring the stage and a few square feet in front of it, the venue is completely carpeted; the lights are set low with several fake chandeliers; a the wall of mirrors reflects a bar alcove underneath an elevated seating area. All time Queercore/Riot Grrl giants that they are, I can’t image a more perfect way to see Team Dresch live.

After tearing open with “Growing Up in Springfield,”Jody Bleyle starts to check the levels: “See, we’re semi-professional now. There’s still tape where there should be wood glue and screws… but…” After “She’s Amazing,” Melisa York gets up from behind her drums and kisses Donna Dresch on the mouth. “Did you see that?! She kissed me!” They kiss again as we laugh and scream. Melisa makes it up to the mic more than once to share how much she loves her band to an understanding crowd. We’re an intergenerational mix of pop-goths, womxn queers with dyed mullets, roadies, grunge punks and skater kids. Adults are a little further back drinking beer and bopping their head while mouthing the words. Youths are upfront getting rowdy and shouting lyrics.

When Team Dresch asks each other what to play next and someone shouts “Freewheel,” Jody’s face lights up. “We weren’t going to do that but we learned it! Looks like just for you!” At the end, Jody lets us touch her guitar. Kaia helicopters her guitar for kicks more than once. Jody and Kaia shred back to back. Jody and Donna swap out bass and guitar with one another mid-note. It’s hard to say just how inspiring it is to see a bunch of queer butch women outside of their 20s rock with such ease, joy, and love for each other; make mistakes, play flawlessly, try new things, trip over elegies, be proud about their new music. “Nothing much has changed. We still eat dinner together and talk about gay shit.” The line between us and them is thin and I get the feeling that’s on purpose. For the guitar solo at the top of “Screwing Yr Courage,” Melisa jumps down into the crowd: “I want to experience this from here, with my people.”

Shepherdess, one of the opening Boston based bands, shared that half the bend met at a Team Dresch concert in the 90s. Team Dresch asked for $18 for their tickets (when Gang of Four played at ONCE in February, they priced theirs at $30). Team Dresch viscerally get the importance of creating space that’s here for queer kids of all ages like them. After a pre-discussed encore (“This is our last song. Well, we’re going to walk off stage and come back on.”), Team Dresch close the show with “Fagetarian and Dyke,” like anyone could have asked for more.