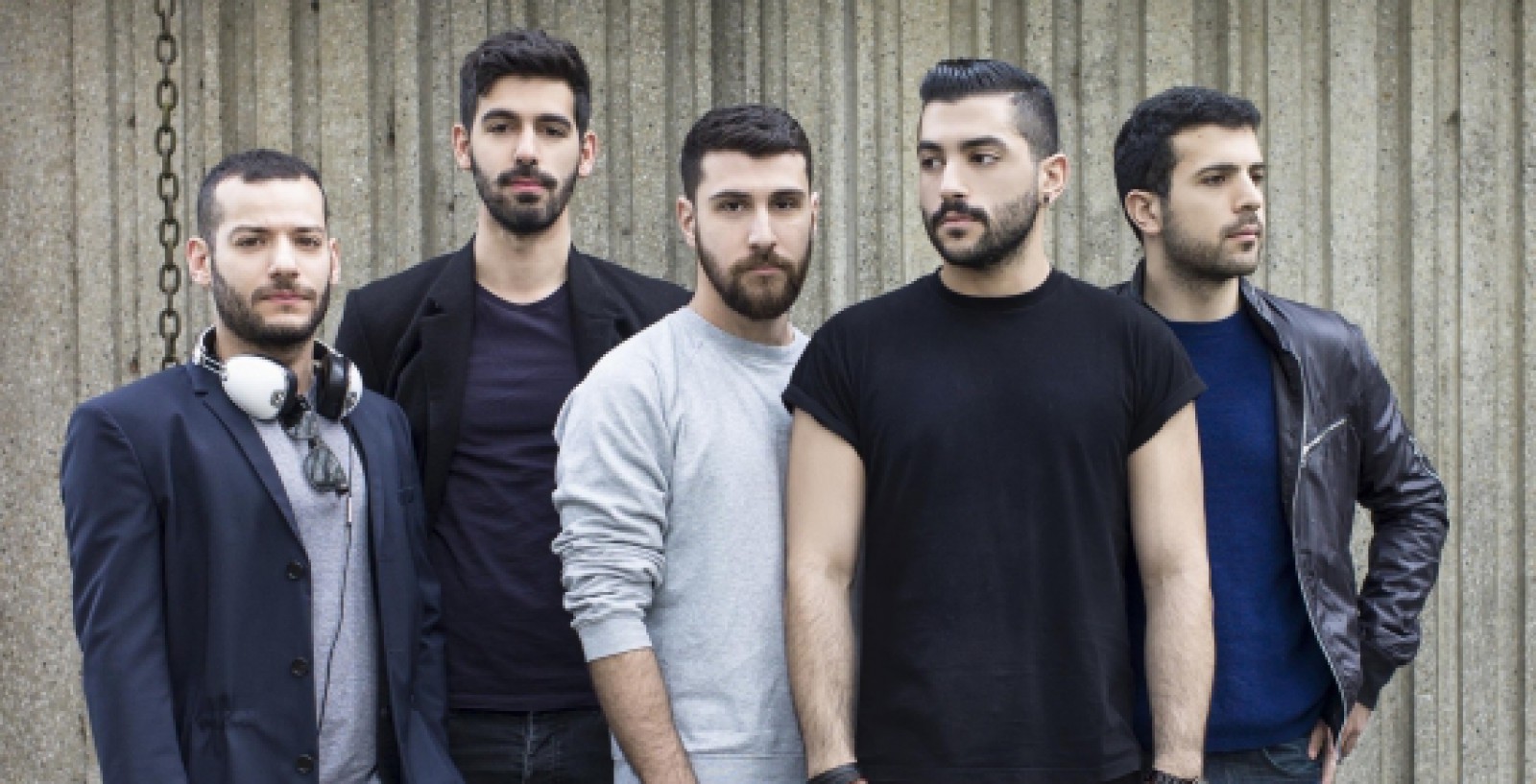 As the crowd is chatting excitedly, a stagehand gently places a kettle with two teabags next to a white mug, both at the foot of the mic stand. It’s hard not to smile at the homeliness of the setup. Then the waiting playlist cuts out, the lights dim, and the artists come out to play. Quick to make themselves at home on stage, Mashrou’ Leila precedes any formal introduction with a new song, just to try it out. “Sandking” provides a gentle introduction as low, velvety tones cast over heavy drums, the accent of a violin, and projected clips of nude figures dancing across sand. This is not your average rock band.

Cambridge is the second performance of their North American 2019 Tour, which started off at Dartmouth College the day before. This August, the group was banned from a festival performance in Byblos, Lebanon because of Christian hate groups, who declared the band “a danger to society,” in an act of discrimination against Hamed Sinno, the lead singer and lyricist, who is openly gay.

Far from their first moment of friction in their homeland, Mashrou’ Leila is famous for the complexity of their songs, which take progressive stances on topics like sexuality, gender, and feminism while celebrating shameless partying, all through the lens of Arab culture and to the tune of electric pop. But don’t let the heavy, drawn out notes mislead you, as they do not mourn their freedoms passively; Mashrou’ Leila’s messaging makes it clear that the space they hold is for resistance against oppressive structures.

Sinno recovers from Sandking by making it clear that he still gets nervous speaking at shows. For a rare moment, he and his voice are smaller and reserved, but it is fleeting. He moves swiftly into introducing the next song, Roman, by acknowledging that, “most of us [Mashrou’ Leila] present masculine,” and that when it comes to presenting Arab-specific iterations of feminist theory, “there’s a plethora of more capable women in the Middle East to speak for it.”

Moments between songs consistently emphasized the duality of the music, the lyrics of which play with language conventions in Arabic. In Kalaam (s/he), the lyrics describe the feeling of restriction when one’s language contains binary in its very fiber. “Everything in Arabic is gendered,” Sinno mentions, “and it gets really f**king confusing… This song is about trying to exist outside of that gender binary,” but as a final layer to an already lyrically complex effort, “It’s also about trying to pick someone up from a bar!” And with that, Haig Papazian’s bow draws slyly across his violin, and the crowd settles into one of Mashrou’ Leila’s most popular and compelling anthems.

As far as stage production, it was left to projections of the music videos for each song, and the free dancing of the musicians. Papazian and Sinno had a fun moment together, Sinno shimmying on his knees, then standing as Papazian opened his arms and fell to his knees, facing Sinno as the singer played with his hair. Uncoordinated but energized and effervescent dances characterized the show — even the videos for some pieces focused on the powerful imagery of Arab and Muslim women dancing. Whether alone amidst a crowd, or sensually in twos as they did in the video for Radio Romance with bright visuals of cleanly-lined purple hair, and pink skin, graceful movement, paired with the heavy-handed beat of synth and snare, made the show feel larger than life.

But there were no lights involved with the last song they played, for which Sinno took a moment to pause the music and ask not only the technicians of the Sinclair to turn off the lights (save those of the bar in the back), but invited everyone in the audience to turn off cellphones in an effort to get the room as dark as possible.

“This song is about dealing with mental illness,” he said simply, “and it’s called Marrikh.” And then his voice and the violin danced through an ode that haunted and stilled. Closing the show with a characteristically resonant 14 second vibrato, Sinno’s vulnerability and control leaves his audience breathless, then roaring.