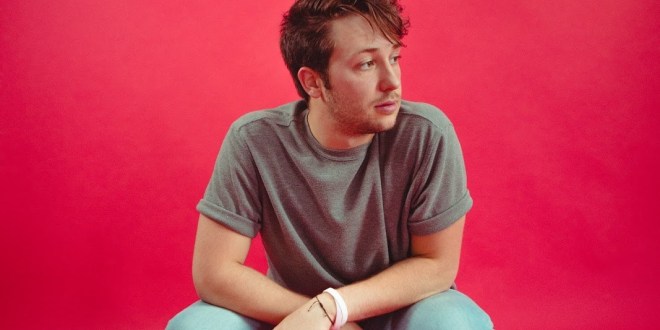 Christian French is currently on tour playing songs off his new EP “The Bright Side of the Moon”. WTBU’s Grace Lauson chatted with Christian French about his daily life, his current tour, and much more.

Grace Lauson (GL): I know you must be pretty busy and this may be a difficult question to answer but can you walk me through what an average day in your life is like?

Christian French (CF): I have two different modes of my life right now. Currently I’m on tour, so it’s a cycle between being in the van, being at the venue, and being in the hotel. We are usually in the van for an average of around 4-6 hours a day getting from place to place. There’s a lot of downtime at the venue just to make sure everything is going to work perfectly well for the show that night. Then I do the show which is always a blast. Then I have a meet-and-greet afterward. I’m trying to do a meet-and-greet with this tour just to meet with as many fans as possible. Then we load up and usually leave the venue by midnight and get back to the hotel around 12:30 or 1. Then do it again the next day. So that’s currently what my life is like.

CF: I enjoy it. It does get overwhelming at times because some days are packed. Sometimes in a 48 hour period, I am consistently working if I’m not sleeping. Those days get overwhelming but there are days like today where I get a day off. Today we drove for most of the day and just got to Toronto. We stopped at Niagara Falls on the way. So sometimes, we make stops to keep it fun and refreshing and not just a van, venue, hotel trio.

GL: Do you prefer touring or making music?

CF: The first two tours I was on I was an opening act. Chelsea Cutler was the first one and Quinn XCII was the second. They were both incredible super fun experiences but it’s a completely different energy between being the opener and being on your own tour. I would still definitely have to say I enjoy being at home and making records. That’s still my favorite thing about music for me. Making records is very special to me and really diving in on an idea that means a lot to you is really the best feeling ever. Now, I have been doing headlining shows for about a week and man the energy is just so incredible. I don’t know, it’s just something that’s really new to me and has made performing a completely different experience. I’m just really loving it right now. It’s nice to have that mix of being at home and then being out on the road because while I’m on the road I don’t typically write music.

GL: Do you notice a huge difference now that you’re playing your own shows as opposed to when you were opening up for various people?

CF: It’s definitely a different energy. When opening for someone else you get 30 minutes to cram in as much music as you can. You are almost trying to convince people to like you. You are the new artist that they have probably never heard of before, so you get a different reaction than people who have bought a ticket and paid money to come to your show, specifically for you. People know all the music at my shows lately and that’s a new experience for me and a crazy feeling compared to what I’m used to.

CF: I get a little nervous but I think it’s more excited than nervous. When we first started was when I was a little nervous. I wanted to make sure that everything I had prepared for was going to go right. So, there is that sense of nervousness just hoping that everything goes well but after we have a few under our belt it’s just gone to excitement.

GL: I know you toured with Quinn XCII — how did you meet him and what was it like touring with him?

CF: I met him through Chelsea Cutler, just touring with her. There were a couple of shows where he was there. My whole team became good friends with his whole visionary music group so literally, right after the Chelsea Cutler tour, I got a call from his team asking if I wanted to join his tour. We were acquaintances before the tour. We met a couple of times but never really got to hang out so going on the road with him was crazy. He is one of my favorite artists and after the shows, I was able to go kick it on his bus. We didn’t share a bus because his team filled that whole bus but Ashe and I split a tour van. We still got to hang out with him and the team after shows, throws bars with him, and do some really fun stuff.

GL: I have heard a little about your start at Indiana University posting on Soundcloud, have you stuck with that same group of people you worked with in college, or has your team grown and changed a lot over time?

CF: At the beginning, I didn’t really have much of a crew it was kinda just me while I was at Indiana University. I met a couple of people along the way and made four records at IU. Then my manager JP reached out and had me come to LA to start making records. After I started making records there, I realized that’s exactly how I need to be making music to get the best stuff out possible. That was when my whole team developed. I would say pretty much the whole time I was at IU I was doing it pretty solo with the exception of a couple friends. We are still pretty early in this process in that my team is still growing but we are all pretty much LA-based now.

GL: I know this is such a dream come true for you but did you ever thought about doing anything other than music?

CF: So I was a pre-med major in college…

GL: That’s a big switch from pre-med to music!

CF: Yeah, it’s so different. I decided to be a doctor in high school so that’s the path I was on. Then the music started working out for me and I started loving music a lot more. Then I shifted my focus there. So I was totally on track to be a doctor.

GL: Do you ever miss doing that or are you really happy in the place that you are at now?

CF: I am really happy with the place I am at but I do love science so much and I’m still really interested in it. Having a science way of thinking has helped me a lot in my career. Just getting the chance to be in psychology and neuroscience classes and stuff like that as well as figuring out the science behind why people think is kinda a cool approach; Especially with the self-help songs, I have been writing recently. It actually helps me a lot. I still listen to scientific podcasts and stuff like that. I really try to stay incorporated with science but just redirect it in a way that can help my music career.

GL: Do you have any other hobbies that aren’t musically oriented?

CF: I love listening to podcasts and reading books. I have been really into that recently and didn’t really have the chance to do that in college just because I had to get my school work done on top of everything else. After leaving college, I’ve had more time to read books and listen to podcasts that I’m actually interested in. I also just love doing stuff outdoors. I love going hiking and being in the trees. I love grass. I love trees. I just love green. So I try to put myself in that as much as possible because you know, living in LA you can easily get trapped surrounded by concrete for days at a time. I think there is a really important feeling that comes from being in nature so I try to be around it as much as I can.

GL: Do you have any bad habits?

CF: Not sure if I should admit this but I don’t really care: I definitely like to get high. I like getting baked. It’s just awesome. Especially while making music. It’s just really fun. I am also pretty strict with it. Especially on tour. Like right now I’m not smoking or drinking at all for my vocal cords sake. Just because drinking and smoking dries them out. So I’ve been staying pretty clean but back in LA when I get the chance I love just getting a little baked before I go to sleep.

CF: Oh man. Still Woozy is up there. DYGL is another one of my favorite bands recently. Sure Sure. John Mayer is always great and Post Malone’s album has been non-stop streaming in our van this tour.

GL: I know you are touring for the next month or so but what’s next for you? What do we have to look forward to?

CF: Well we are kinda letting this “Bring Side of the Moon” EP sit for a second but with that being said we also have a whole bunch of other music we are getting ready to roll out after the tour. I have never been more excited about the music I’ve made before this EP and the music that’s not out yet. I am so excited to get that rolling after the tour.

Christian French will be playing in Cambridge this Sunday, 9/15 at Sonia. Tickets can be purchased here.