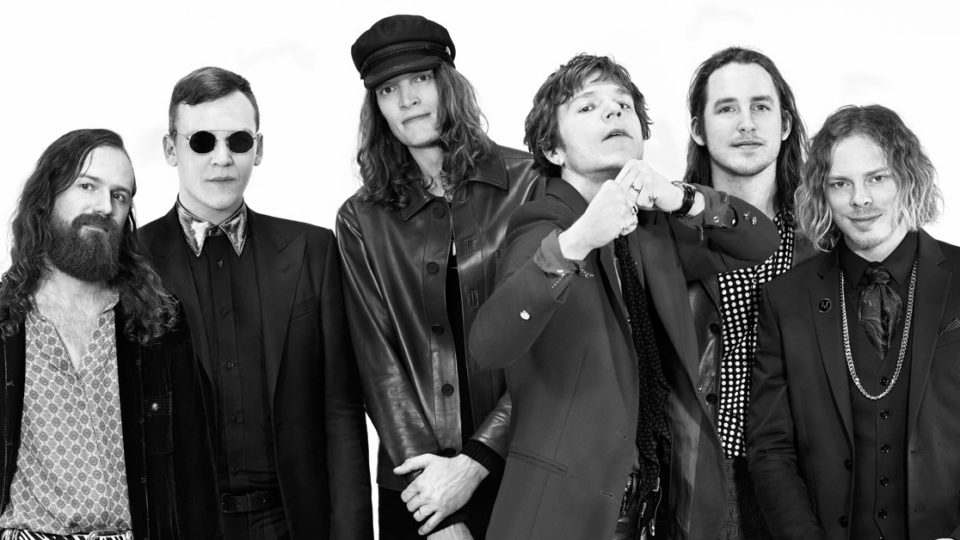 An all-star lineup rocked the Xfinity Center this past Thursday evening, with rule-breaking, bending, and sometimes back-bending bands Sunflower Bean, Spoon, Cage the Elephant, and Beck. Talk about a rock show.

Sunflower Bean, indie rockers from New York City, took the stage first, playing a short but all shots fired set stemming from classics like “Easier Said” and “I Was A Fool,” to the self-empowering “King of the Dudes,” off their new EP of the same name. Julia Cumming, versatile vocalist, bassist, and fashionista, managed to actually get some parents off their seats, while fans watched in awe of Nick Kivlen’s jarring yet sensuous guitar work. Touring member, formerly of The Lemon Twigs, keyboard slayer Danny Ayala, quite literally picked up and shred his keyboard as if it was a guitar. Sunflower Bean reminded the audience that some good ole classic rock is forever, far-reaching, and fearless.

Next up on the marquee was Spoon, iconic Texan band comprised of lead singer Britt Daniel, guitar wielding alongside Gerardo Larios and Alex Fishel, who also handles keys, slung together by Jim Eno, drummer. They played a set matching the vitality and velocity of their new greatest hits album, Everything Hits at Once. Sliding right into the tour debut of “Do I Have To Talk You Into It,” with a performance as sultry and sly as the lyrics, “They say I better to seal you up in wax / So that you’re never going to bite me back.” Long-time Spoon fans, adorning their t-shirts from the past 20 years or so, sang along feverishly to classics “The Underdog,” “You Got Yr. Cherry Bomb,” and personal favorite, “I Turn My Camera On.” Ending with “Rent I Pay,” the band working in tow with the setting sun, the crowd watched as Spoon salaciously strut to the beat of their own style of classic, careless, yet courageous rock and roll.

Co-headliners Cage the Elephant left nothing to be desired, charging ahead full-steam with an all-encompassing musical experience, including flames, fog, and a fiery-spirited Matt Schultz stumbling ever so graciously onto the stage wearing a full-face mask and an array of hats. The spectacle mirrored the disarray of their latest album, Social Cues, including setlist finalists, “House of Glass,” “Broken Boy,” and “Tokyo Smoke.” If Schultz stage antics wasn’t entertaining enough, combined with the nonchalance of the remaining bassist, guitarist, and drummer, there was the dreamy high school nostalgia of classic Cage tunes, most notably “Cigarette Daydreams,” where it seemed to be a cathartic release for both Shultz and audience, as if it was an exchange of grief and love between artist and listener, one of the best things about rock music.

Finally, Beck took the stage, almost simulating some kind of anti-Lil Nas X, raised up high on a pedestal strumming some distorted twang, ringing through the ampitheater, until suddenly the smash hit of forever, “Loser,” started simultaneously. As someone with not much knowledge about Beck other than this tune, it was pleasantly surprising to find out, throughout the set, that I actually knew most of the songs played. I think that’s the genius of Beck Hansen. He’s the king of turning an alternative idea into an insanely marketable pop song, without losing any of its unique charm or hustle. His band is full of insane players, including guitarist Jason Falker who maintained a cheesy grin throughout the entirety of the show, looking to have had just as much fun as the adoring middle aged women, who I completely identify with, dancing around to classics like “Debra,” “Wow,” and two different versions of “Where It’s At.” If you came to the Night Running tour expecting anything less than a circus of rock legends and misfits, you came to the wrong show.