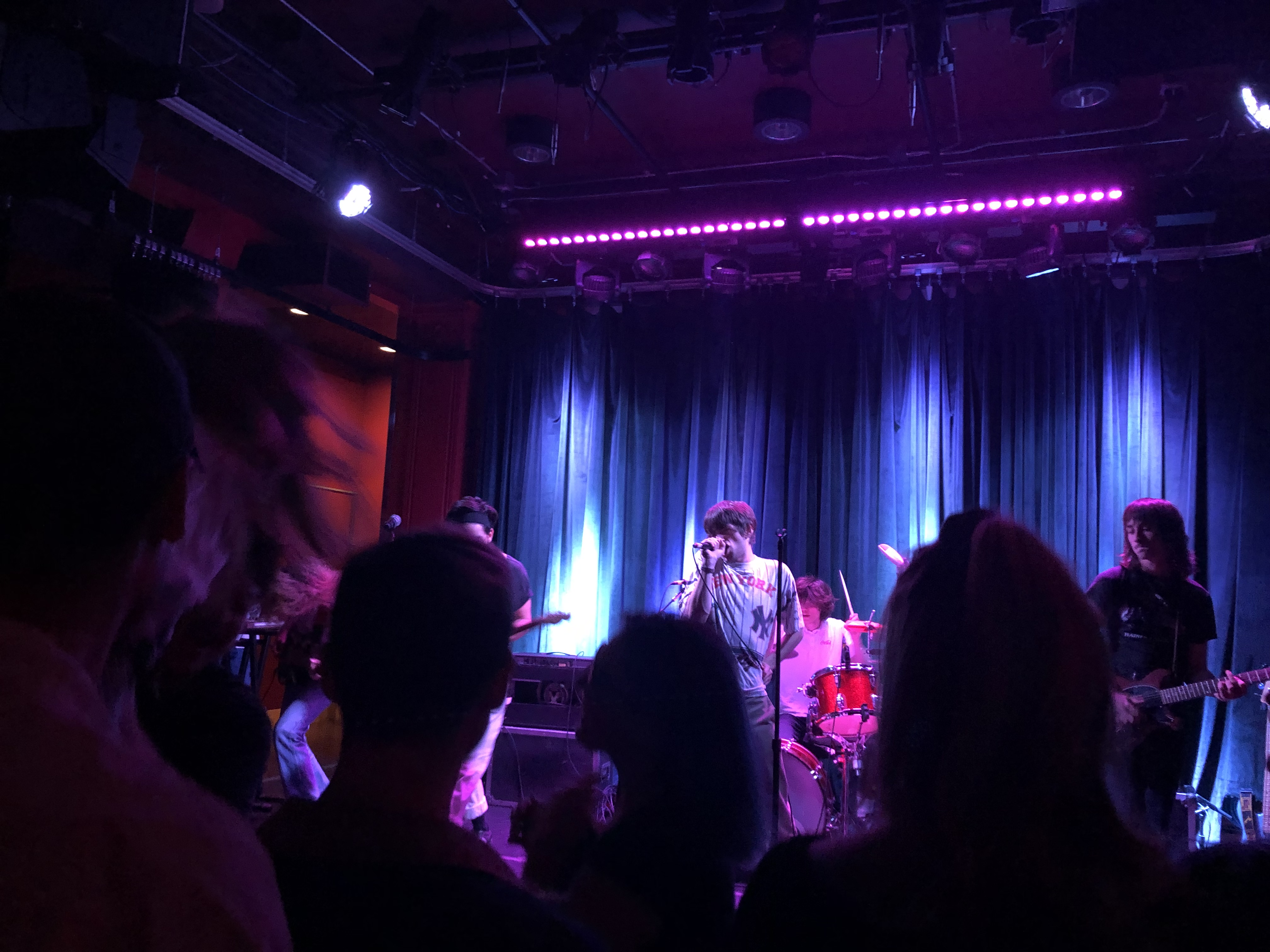 Liily performed at Café 939 on Tuesday night to play songs from their first EP, I Can Fool Anybody in This Town, released in March 2019. They stormed the stage only to swallow up the crowd for a bit before spitting them back out.

Liily has an unabashed, unapologetic swagger that instantly electrifies the room they’re in. The rock band is comprised of five Los Angeles teenagers: Dylan Nash on vocals, both Sam de la Torre and Aaron Reeves on guitar, Charlie Anastasis on bass, and Maxx Morando (formerly of The Regrettes) on drums. The boys embodied a thick grunge aesthetic as they came on stage, each with a different graphic t-shirt (Snoopy, Yankees, Catskill Mountains, Coca Cola, and Midwest Boyz, in case you were curious), their arms decorated with stick and poke tattoos, khaki pants cuffed, and beat-up, white sneakers on.

The band wasn’t one for introductions, as they immediately launched into their title track, “I Can Fool Anybody in This Town.” Though the song itself lacks lyrical depth — the chorus and the bridge fail to add any variety — the sharp guitar paired with the lead-in to an impressive drum solo from Morando shows that the band comes as a unit.

The smaller crowd instantly turned into a feverish mosh pit once vocalist Nash shyly looked down and asked everyone to come closer. With a few tuning adjustments, the band hurtled forward with “Toro,” a song that has a similar sound to a more-grunge The Black Keys and The Pale White, and also a bit of early Foo Fighters. It does a good job of pulling in every band member’s strengths, an impressive feat that did not go unnoticed. Nash only broke eye contact with the audience briefly to check in with his bandmates. His deathly stare into the crowd and frantic energy as the chorus built, “All my life wanna take it over / Stranger, do me the most / Look into my eyes” relayed a clear message: they believe in the music that they’re creating.

After a short interlude segment of random guitar riffs and Nash finishing his second plastic water bottle, Liily continued with the set list. Their best track was “Sold,” with the cymbals cutting any stale, cold air that permeated the venue. The song itself runs an interesting route, building and falling into itself with the chorus. Despite a crashing, messy sound, it leaves audience members attentive. The band slowed down with “Sepulveda Basin,” using backup vocals from the guitarists to add extra layers and showcased their ability to enter a softer sound.

Liily excels with their craft itself: the music pulls listeners in, whether they would like to be subjected to the thrashing guitar, drums, and raspy vocals, or not. However, the band lacks in stage presence or charisma. They let their music tell a story, but they don’t quite seem to understand that this a concert also serves as a performance, as well. Once they find their footing and begin to engage more with those eager to see them, they will transform further into the energetic band they are meant to be.