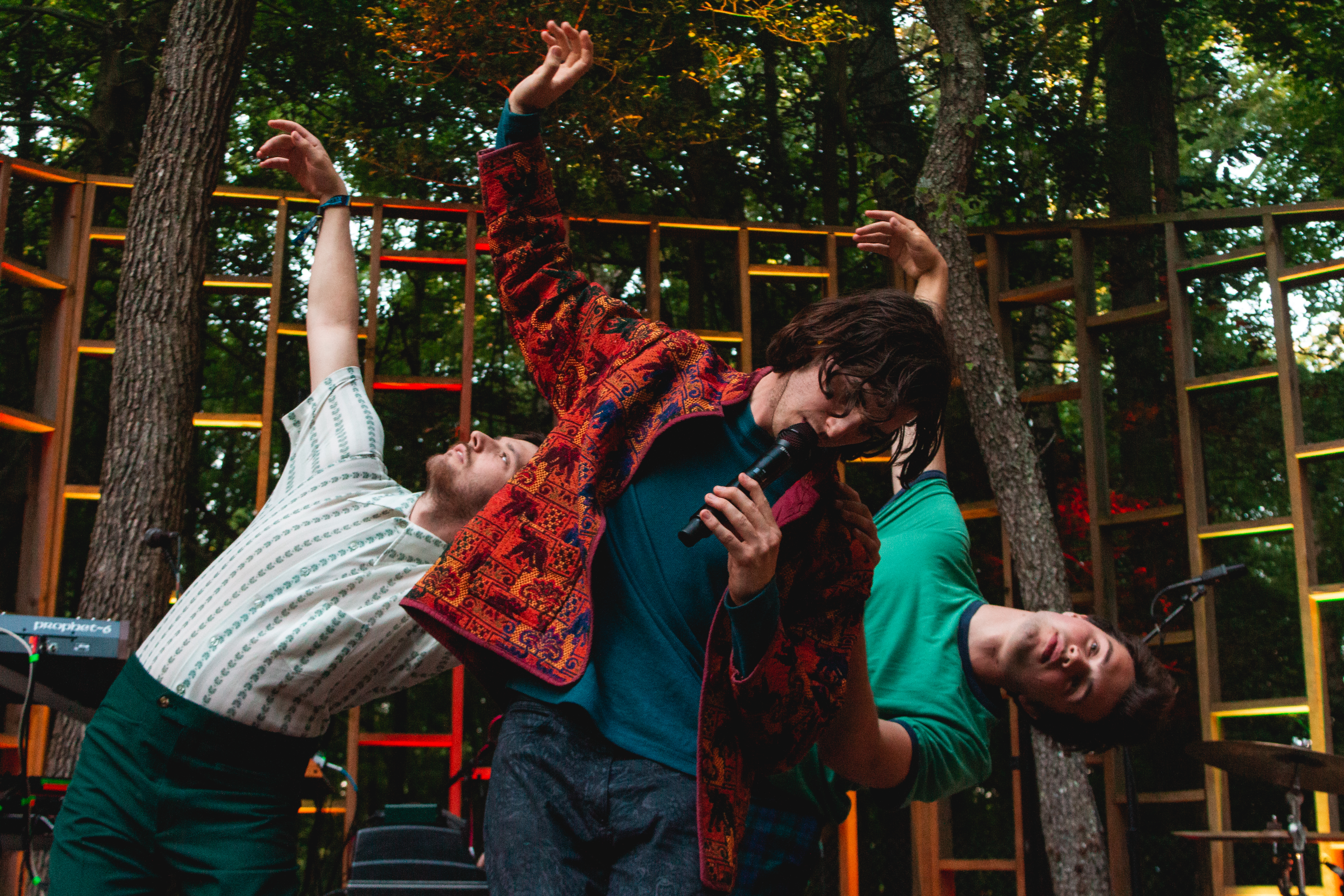 Firefly was fun and exhausting and worth every second. To cover as many different aspects of the festival as possible, here are my ABCs of Firefly:

A is for All the Artists who performed. With well over 100 artists taking the stages during the weekend, there was no way I could see all of them. Multiple times a day, I would pass by a stage on my way to another, just watching the crowd move to the music and wishing I could be in the middle of it. I appreciate those moments just as much as the concerts I watched front row because I could still listen to the music while cooling off in the shade.

B is for Brockhampton. Saturday night, as people gathered around the Prism stage for the rap collective to appear, a large dark structure materialized. As the lights came up and the crowd started cheering, stagehands pulled the cover off to reveal a full-sized golden airplane with its side opened up. With each verse of their opening song, “NEW ORLEANS,” a member would emerge from the plane. Needless to say, the airplane was a fascinating addition to the boy band’s high energy performance.

C is for Campsite. I was lucky enough to spend the weekend in the south camping hub for the full experience. Both the north and south camping hubs had a lot to do, including intramural sports, small music stages, and vendors. Tips for if you ever go: you can only take one car into the campsites. You can’t even drive in with a second car to drop stuff off because your car is marked with a sticker. This mistake cost me almost an hour of driving in circles on Friday night. If you can camp for the whole weekend, however, definitely DO IT!

D is for Dust. Not only was it blistering outside in the sun, the air was extremely dry. This combined with the heavy foot traffic led to a lot of dust being kicked up into the air. I would suggest a bandana to cover your face, but if you aren’t into that, be prepared to blow some dust out of your nose!

E is for ENO. Little known fact, anywhere you walk within Firefly’s festival grounds, you can always see at least one of these hammocks strung up in a tree. I brought one and truly appreciated being able to relax in the shade of a tree after being on my feet all afternoon.

F is for Friends. I am so happy to have brought my friend Natalie and met up with my friend Sam while I was there. If you are going to Firefly, go with friends! It is always nice to be with people you trust in large crowds. Not to mention EVERYONE at Firefly was friendly, which made for a pleasant experience the whole time, and I left with a few new friends.

G is for Glowsticks. These are the nighttime equivalent of hammocks. See Z for more.

H is for Half Alive. I think the name is quite fitting. When the band first came out on stage, they huddled in the back away from the crowd, only eventually turning to face the crowd. However, their low energy set paired beautifully with the wooded Treehouse stage, which felt like a completely other world away from the heat and noise of the rest of the festival.

I is for Ice. Whenever possible, get ice! In the middle of the day, a piece of ice on the forehead or neck can be the difference between dehydration and heat exhaustion.

J is for Jukebox the Ghost. Over at the Hideaway stage, this trio jammed away with their high energy piano rock. Not only do they sound like Queen, but they also performed “Bohemian Rhapsody” arguably better than Panic! At The Disco did the night prior. Plus, later the same day, they had an addition Jukebox the Ghost Does Queen set!

K is for Kids. I was genuinely surprised by the amount of families I saw at Firefly, considering the widespread drug use and the profanity coming from a lot of the performers. It is sort of unreal running into a ten-year-old while moshing.

L is for the Lawn Stage. Probably the second best stage at Firefly behind the Main stage. I saw Young the Giant, Passion Pit, AJR, and Walk the Moon there, in addition to the sets I would pass by.

M is for Money. As far as value, Firefly was a great deal. A weekend pass costs $330, and I saw 21 sets. That’s less than $16 per artist! Some of the artists, like Tyler, the Creator, Travis Scott, or Post Malone, can cost upwards $100 to see at their own concert.

N is for Night. At the end of the day—around 1 AM—we would make our way back to the campsite and unwind, only to do it again the next day. Everything seemed slower at night because we finally experienced silence.

O is for Obscure. Firefly was a great place to find new and upcoming artists to enjoy.

P is for Post Malone. At the end of Sunday night, Austin took the Main stage and gave a wonderful heartfelt performance. He played every hit from “White Iverson” to Spider-Man: Into the Spider-Verse’s “Sunflower.” As the last headliner, I felt a sense of unity with the rest of Firefly. Post Malone definitely drew the largest crowd of any performance, and he deserved it.

R is for Rickshaw. They may charge you a lot of money to ride, but they got us from the parking lot to the festival entrance in five minutes on Friday night, just in time to see Tyler, the Creator. A lot of the drivers decorate their rickshaws and play music, making the ride that much more enjoyable.

S is for Sun. Wear a hat. Wear sunglasses. Wear sunscreen. Drink lots of water. Do whatever you need to do because the sun was Public Enemy No. 1 at Firefly. People would constantly pass out in the crowd and be pulled out by security.

T is for Tyler, the Creator. This was my first and favorite set at Firefly. After the campsite debacle, we sprinted to the Main stage to catch Tyler coming on. I was too late to shoot, so we pushed our way through the crowd until we found the mosh pit.

U is for Uber. Ridesharing is surprisingly sparse in Dover, Delaware—at least at 3 AM, when we tried to call for an Uber and a Lyft to get back to Sam’s campsite from Wal-Mart, where we parked our car Friday night. Unfortunately, the nearest Uber and Lyft were 30 minutes away, so we slept in our car in the Wal-Mart parking lot.

V is for Vampire Weekend. Taking the Main stage on Sunday afternoon, Vampire Weekend had the best sound of any set. I could tell each person on stage was truly musically talented, extending songs for solo sections and riffing off of each other. To top it all off, they had a large inflatable earth hanging above them, straight from the Father of the Bride album art.

W is for Woodlands. Most music festivals are just music festivals, but part of Firefly’s experience was camping. Firefly stuck to this theme with stages like the Hideaway stage and the Treehouse stage. There was even a butterfly enclosure nestled in the forest. Everywhere I looked, trees towered over the festival grounds.

X is for X Ambassadors. One of the artists I only got to pass by. They sounded good from a distance, so I bet it was a terrific performance.

Y is for Young the Giant. The lead singer, Sameer Gadhia, donned a cloak covered in mirrors to go along with their new Mirror Master album. In addition, Sameer has one of the most beautiful voices live. The band sounded better than they do in recordings.

Z is for Zedd. Closing out the first night at the Prism stage, Zedd had the massive crowd wrapped around his fingers on the DJ board. When the bass dropped, everyone would toss glowsticks into the air, creating a cloud of color in the sky. His set and the other EDM sets also had the best pyrotechnics at the festival, with fireworks, fireballs, smoke, and lasers creating a whole atmosphere around the stage.

In the wake of the sublime sensory overload that was Firefly Music Festival, I don’t think there is any way of succinctly summarizing the weekend, but I did my best.