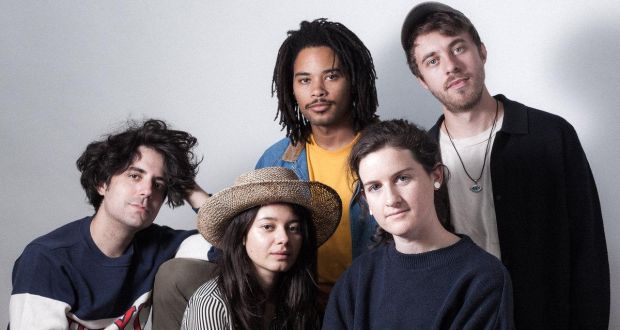 At SXSW, WTBU DJ Allie Antonevich interviewed Barrie, a Brooklyn-based band, at Historic Scoot Inn during the B+Q BBQ Day Party. Just coming off their tour with Miya Folick, their debut LP, “Happy To Be Here,” is out May 3rd.

Allie Antonevich: How did you guys all come together and when?

Barrie Lindsay: So, our first manager found my songs online. And he’s like, “I know these two guys in New York… You should come to New York and start a band with them.” I was living in Boston at the time.

Sabine Holler: And then they needed a bassist, and they found me on Tinder.

BL: How would you explain how Dom came in?

Noah Prebish: Dom plays in another band called “Is Tropical,” I play in another band called “Simon Spine,” and our bands are on the same record label and so I’ve known him for a pretty long time. And he told us he’s moving to the United States, so I told him he had to be in our band. He’s one of my favorite drummers, he has a really unique style. It was perfect. Our old manager, our first manager also knew him it turned out through unrelated ways. New York is super serendipitous like that, everybody knows everybody.

AA: I know you guys were on tour as well, and I wanted to go to your show in Cambridge and couldn’t, but did you favorite venues or memories from that?

SH: It was so great! Atlanta was my birthday, that was really special.

NP: When we were in Atlanta, we celebrated Sabine’s birthday by going Atlanta’s oldest strip club, which is honestly one of the most harrowing experiences in my life.

BL: Clarify what you mean by oldest, though —

SH: It’s one of the oldest run.

NP: Well, in both senses of the word, it’s Atlanta’s oldest strip club. The cigarette smoke was so strong it was literally stinging my eyes the entire time we were there.

SH: He was using his t-shirt to cover his eyes.

AA: You should have brought swim goggles.

AA: Who or what do you guys draw inspiration from?

SH: Everything… Life! Life is inspiring.

NP: We really do like Brazilian music. That’s a pretty central theme I would say.

NP: Barrie writes all the songs and gets them to a certain point, and then we all put ourselves through the Barrie-filter and see what comes out.

BL: Yeah, I write the songs and once we get into studio and production, we all get them to the next level.

AA: What are your favorite parts about being in a band?

SH: We get to play music.

Spurge Carter: We get to learn from each other quite a bit.

SC: It’s been a great learning experience. We come with different tastes, even our first day hanging out in our AirBnB and showing each other music. That’s one of my favorite parts.

AA: What do you guys want for the future?

BL: (Laughs) That would be nice.

SH: We want to achieve a bigger audience.

BL: What we’ve got right now is really special. If we can have this on a larger scale… The point of this is connecting with people, and the more people you connect with…

NP: I don’t even need us to have a huge fanbase. I think if we could take what we have going on and make the comfort of living a bit… But that’s what everybody’s looking for. We don’t need it to be crazy.

SC: I don’t need it to be crazy, but I also… We’re literally driving around playing shows for free because we want to impact people. It’s connecting, but it’s also impacting people. A lot of us are super passionate about it.

SH: To know that your job is to give people a good time. To find the value of giving your expression to someone and seeing that you’re connecting with them.

AA: I know “Happy to be Here” is coming out soon, how would you describe it?

DA: Fleetwood Mac if they were born in South America.