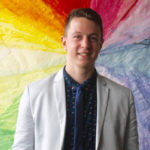 Stepp Lab undergraduate research assistant Dante Cilento has been selected to be inducted to the BU Scarlet Key Honor Society!

For 80 years, the Scarlet Key Honor Society has been the highest honor awarded to Boston University student leaders. Inductees are students in their senior year who have exhibited exceptional leadership among their peers during their years at Boston University. Selection for Scarlet Key is based on excellence in University student activities and organizations, commitment, involvement in the individual’s School or College, and in scholarship.

The Scarlet Key Honor Society was founded in 1938 as an activities honor society, in which new members were voted in—or tapped—annually by existing members. Initially, members tapped their future inductees on the shoulder to hand them their induction ceremony invitation. The formal initiation ceremonies took place each spring and fall. Today, BU faculty and staff nominate potential inductees annually in the spring for fall tapping, followed by a formal induction ceremony during Commencement Weekend in May.