The Southern Street of the Dead 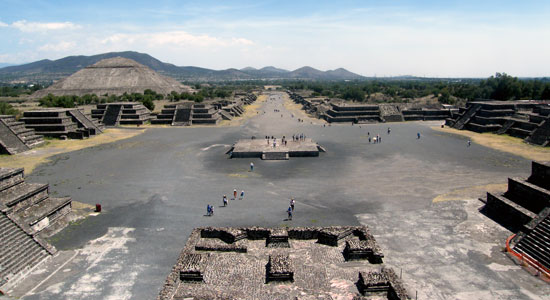 Northern Street of the Dead viewed from the Moon Pyramid looking south towards Tlajinga.

One of Teotihuacan’s most distinctive urban features is its central artery, named the Street of the Dead by the Aztecs (we do not know what the Teotihuacanos themselves called it). This central avenue stretched over five kilometers and tethered the central monuments and outer neighborhoods of the city. Although every year millions of tourists stroll along the reconstructed northern Street of the Dead, we actually know remarkably little about its initial construction and the processes by which it developed. This deficiency is even more acute for the southern Street of the Dead, which has not been reconstructed. Was the street planned and constructed in its entirety or in increments, beginning in the north and developing south with urban sprawl?

Excavations in the southern Street of the Dead, where it passes through the Tlajinga district, show that construction involved cutting through tepetate, the hard volcanic tuff substrate of the region. Whereas this major labor project is suggestive of strong central planning (from the top down), the modest construction exhibited in walls delimiting the street is more consistent with local level processes (from the bottom up). We are assessing the developmental trajectory and organizational dynamics of the Street of the Dead using various lines of evidence, particularly micromorphological analyses conducted by Mareike Stahlschmidt. These will allow us to date the expansion of the city to the south and evaluate how planned the process was. 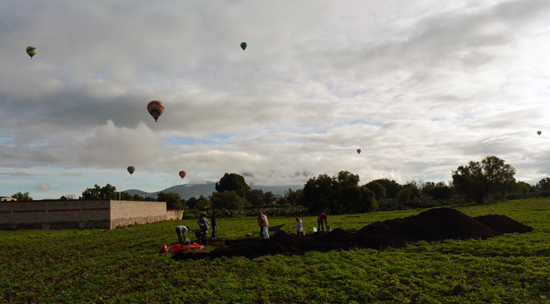 Southern Street of the Dead viewed from the Tlajinga district looking north towards the Moon Pyramid (with balloons).