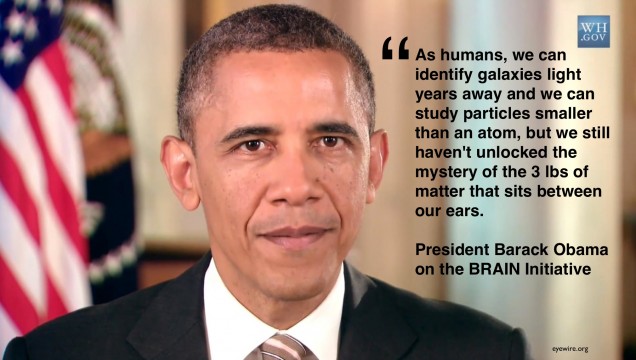 END_OF_DOCUMENT_TOKEN_TO_BE_REPLACED


In light of the Obama Administration's decision to commit $3 billion over 10 years to NIH's Brain Activity Map project, we thought it may be important to go back to our roots.

Who are we? This is the ultimate question posed by all of Western thinking and perhaps NIH's Brain Activity Map is the culmination of our efforts. The goal of the project, in a nutshell, is "mapping the activity of every neuron in the human brain in 10 years." Absurd, outrageous, momentous, profound! Okay, so when did we decide that this was possible, or even that we should try? In their modern form, these beliefs spring from a movement in cognitive science called Connectionism.

END_OF_DOCUMENT_TOKEN_TO_BE_REPLACED


Whether you’ve read an article, listened to the radio, watched the news, or heard from a friend, I'm sure you already know that President Obama and his administration have been planning to enrich our future as mind and brain enthusiasts. However, if you have been under a rock, studying for midterms, or working (way too much), you may be asking – how? Well, do you know the whole Human Genome Project thing? How it revolutionized genetics? Just like geneticists who were able to map the complete human genome by 2003, neuroscientists will be given the goal of more fully understanding the human brain by building a map of its activity.