Seagrass meadows around the world are declining due to natural and anthropogenic stressors, including global climate change. Leaf reddening, the expression of red coloration in leaves, is a well-documented response in terrestrial plants that has been shown to increase resilience to stress, but has been poorly understood in seagrasses. To increase our understanding of the prevalence, causes, and function of leaf in seagrasses, surveys were conducted in the world’s six seagrass bioregions and a series of experiments were performed with green- and red-leafed Thalassia testudinum shoots in the lower Florida Keys. Results show that leaf reddening is prevalent in seagrasses, occurring in numerous species growing in shallow waters with high light intensities around the world. In addition, experiments with T. testudinum demonstrate that the expression of red coloration is caused by the accumulation of anthocyanins. Acting as a sunscreen during periods of high UV and visible light intensities, anthocyanins can be an indicator of UV-B exposure and may be either transiently or permanently expressed in leaves. The findings of this study imply that leaf reddening could increase seagrass resilience to changes in atmospheric UV levels caused by global climate change by acting as a sunscreen and protecting photosynthetic mechanisms from damage. 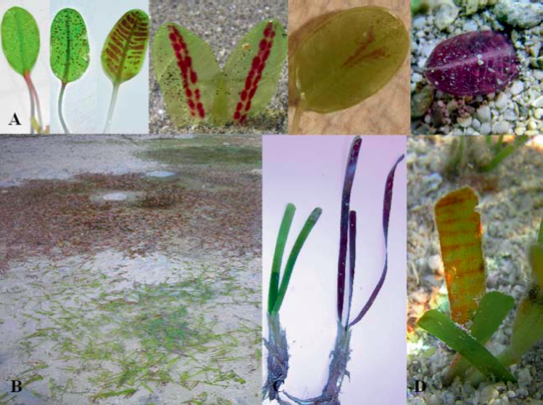