Increasing the protection of coastal vegetated ecosystems has been suggested as one strategy to compensate for increasing carbon dioxide (CO2) in the atmosphere as the capacity of these habitats to sequester and store carbon exceeds that of terrestrial habitats. Seagrasses are a group of foundation species that grow in shallow coastal and estuarine systems and have an exceptional ability to sequester and store large quantities of carbon in biomass and, particularly, in sediments. However, carbon stocks (Corg stocks) and carbon accumulation rates (Corg accumulation) in seagrass meadows are highly variable both spatially and temporally, making it difficult to extrapolate this strategy to areas where information is lacking.  Boston University in collaboration with MIT Sea Grant,  EPA, Massachusetts Bays National Estuary Program, and  Autonomous University of Barcelona has been estimating Corg stocks and Corg accumulation at eleven eelgrass meadows across New England, representing a range of eutrophication and wave exposure conditions. In addition, our team is identifying the environmental factors and structural characteristics of meadows related to variation in Corg stocks. Data from this study will be used to inform New England States and Eastern Canada Provinces as they implement their Regional Climate Change Action Plan. 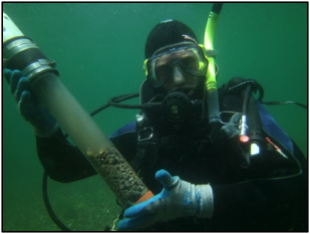