Carrying A Torch For Columbia 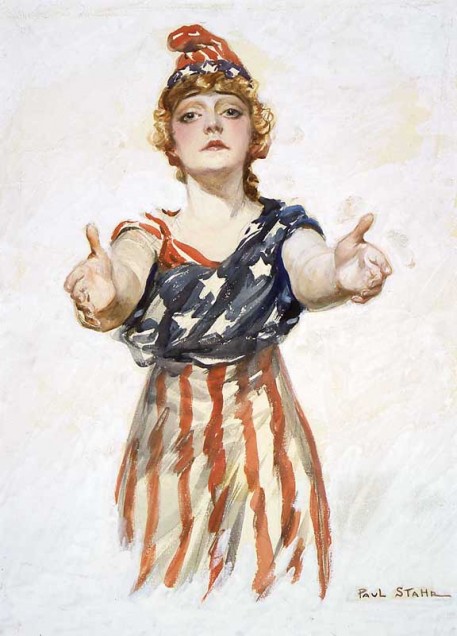 Who would you say is Hollywood’s most prolific actress? Who would you guess has appeared in the most motion pictures over the course of their career? A Golden Age star such as Bette Davis or Joan Crawford? One of the young talents who seem to be in almost every new film coming out? The answer may surprise you … but to get to that answer, we have to go back — far, far back. Let’s start at 1919, although our journey will go further back still.

1919 saw the founding of Columbia Pictures in Hollywood, which was originally called Cohn-Brandt-Cohn Film Sales after its founders, brothers Harry and Jack Cohn and their partner Joe Brandt. The name never really stuck with the public and in 1924 the Cohns changed the name to Columbia Studios, after the female personification of the United States of America (seen at left in this World War I poster).  Early Americans were familiar with this image of  “Lady America” as she was represented in many paintings and newspaper editorial cartoons. She was eventually supplanted as the image of America in the 1920s with the growing popularity and appeal of the Statue of Liberty. The Cohn brothers wanted that same instant recognition for their films and had the studio artists design “their” Columbia with Lady Liberty’s torch (seen below in their 1934 logo).

Here’s where it gets sticky. In 1939, the logo was revised into the image we are all familiar with today. Many actresses have claimed to be the models for the early Torch Lady logo, among them Claudia Dell, Evelyn Venable, Dorothy Revier, Viola Dana and Amelia Batchelor (both Venable and Batchelor are listed as models in their IMDB credits).

I favor the argument for Venable – although the studio never publicly acknowledged her as the model, the comparison photos in this article are pretty convincing proof:  http://magazine.uc.edu/issues/0912/Venable.html

This logo was used up to 1976, when it went through a number of variations, due to a number of different corporations (including Coca-Cola) becoming partners with the studio. For a while the Torch Lady was gone entirely, to be replaced by just the expanding rays from her torch. That all changed in 1992, when the studio (which was now a subsidiary of Sony Pictures Entertainment) decided to go back to the classic logo, but reinvented for the new era. They chose New Orleans artist Michael Deas to create an image for the ages and the one that is still known today.

When Deas got the assignment, he interviewed a number of models for the new face of Columbia, but could not find exactly what he wanted. A friend at the local newspaper told him he had just the woman for the job, a graphic artist named Jenny Joseph. Deas met with her and agreed instantly – this was his Columbia. Jenny had never done any modeling, but was willing to give it a go. The entire session was done over her lunch hour, with Deas draping her in a sheet and having her hold a desk lamp from the office. The result was history. For more on their meeting and to see Jenny today, take a look at this recent news clip from 2012:  http://www.wwltv.com/news/10pm-Hoss-Columbia-Pictures-Logo-Artist-176043361.html 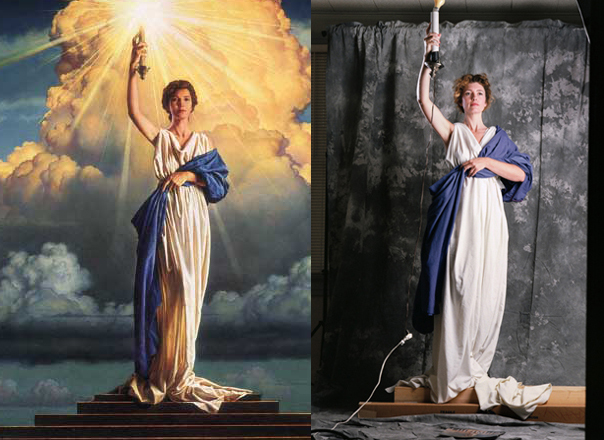 So there is your answer … neither Bette Davis nor Joan Crawford nor any of today’s starlets – the hardest-working actress in Hollywood is no actress at all, just a graphic artist who decided to pose as a lark over her lunch hour. The next time you go to the movies and see the Columbia logo appear, do what I do: quietly smile and wave to her and whisper, “Hi, Jenny!”