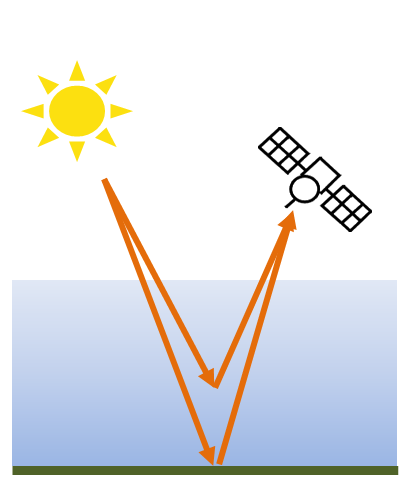 Instruments on board Earth-orbiting satellites provide extensive spatial coverage of atmospheric observations. In our group, we focus on measurements of chemical compounds related to air quality, including O3, NO2, HCHO, and SO2. The concentrations of these species can be determined indirectly by interrogating solar backscattered radiation because of their specific absorption properties.

Our group uses these observations to learn about air quality in regions of the world without traditional ground-based monitoring. We also use these observations to refine chemical mechanisms and estimates of pollutant emissions for modeling air quality impacts. To date, space-based observations of air quality have been from instruments in sun-synchronous low-earth orbit. These give incredible global snapshots of atmospheric composition, repeated at the same time each day. In the near future, new instrumentation in geostationary orbit will be launched, providing us with hourly observations over specific regions of the world. 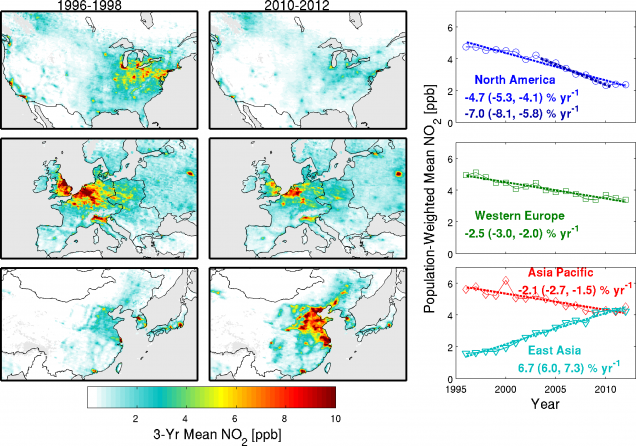 In this study, we used observations of NO2 tropospheric column density from three satellite instruments in combination with chemical transport modeling to produce a global 17-year record of ground-level NO2 concentrations.

With this data set, we also calculated trends in population-weighted annual mean NO2 (PWMNO2) for different regions around the world. While PWMNO2 has decreased substantially over North America, and modestly over western Europe and Asia Pacific, it has more than doubled in East Asia. On average globally, PWMNO2 increased by about 1%/year. The trends we derived based on satellite observations were consistent with regionally-averaged ground-based monitoring observations where those are available. We further demonstrated how regional trends in NO2 aren’t always the same as the regional trends in fine particulate matter, suggesting that these observations together provide complementary information on the changing pollution mixture worldwide. Improvements in this approach are expected as the relationship between ground-level concentrations and observed column densities are better understood, and as new satellite instruments with higher spatial and temporal resolution are launched.

In our group, we use the GEOS-Chem model extensively. GEOS-Chem is a state of the art CTM used by research groups from around the world. In particular, we are interested in improving and validating the representation of biosphere processes in chemical transport modeling. The terrestrial biosphere is both an important source and sink of constituents in the atmosphere that participate (and control) the chemistry of the troposphere, making its role in air quality management and climate mitigation complex. 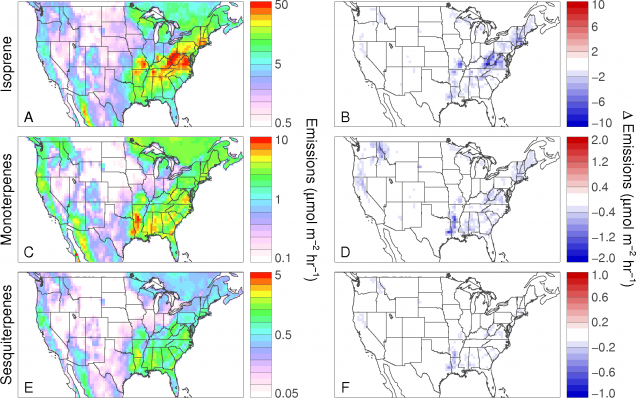 In this study, we developed a new land cover module for GEOS-Chem that harmonizes biosphere-atmosphere exchange processes to a single input to facilitate simulations of land use and land cover change impacts on atmospheric chemistry. We used this module to investigate the potential impacts on predicted tree mortality across the United States as a result of insect and disease.

We found that over a 15-year time horizon, nationwide biogenic emissions of important reactive hydrocarbons would decrease by 5%, and locally up to 50%. Deposition to the biosphere would also be altered by 10-15% locally. These changes were shown to impact biogenic-derived secondary organic aerosol mass concentrations, and ozone air quality even in urban regions downwind of the direct effects of tree mortality. We anticipate the impacts of tree mortality predicted in these simulations are conservative, since future climate change and other factors that may drive tree mortality (drought, invasive plants, etc.) were not considered. Given the interest in tightening air quality standards around the world, anticipating how changes to the biosphere will impact those achievements could be important.