Students in Cookbooks and History (MET ML 630), directed by Dr. Karen Metheny, researched and recreated a historical recipe to share with the class. They were instructed to note the challenges they faced, as well as define why they selected their recipe and why it appealed to them. Here is the first essay in this series, written by Sarit Sadras Rubinstein.

There is nothing like a comforting rice pudding. Whether served warm or cold, the few simple ingredients and the flavors they yield make it a great dessert. And with the fact that it is also filling, you get a winning dish.

It was raining outside when I searched for a recipe to recreate for this project for the Cookbooks and History class. Since I already had a copy of the book The New England Cookbook (1836), I decided to look through the recipes and see if I liked one. Even though it may have been tempting to try a recipe such as the “pressed head” (cooking a pig’s head), I thought it would be best for everyone’s sake if I chose a less exotic recipe. So when I suddenly noticed the recipe for “a rich rice pudding,” I knew this was it. It was a perfect match for the day’s weather.

Even though rice pudding is supposedly not too complicated to make, there are so many versions of it, meaning each recipe can yield very different results — starting with the cooking process, the texture, sweetness, and even the overall look of the dish. I was curious to see how they made it during the 1800s and what it would taste like.

The recipe was quite short in length, but once reading it there were a few questions that popped up for me even before making anything. Some of them were regarding the ingredients. For example, what kind of rice were they using back in the 1800s? There are so many kinds of rice I can choose from (some are long-grain, medium-grain, white, brown). I decided to go with medium-grain rice since this is the one I usually use for rice pudding.

Some questions were about measuring. For example, there was no specific amount for how much nutmeg to add. Another example is the measuring tools and dishes that were used. What was a teacup measurement? What was a pudding dish? Unfortunately, I had no idea what those were back then and what are their equivalents in today’s time.

The biggest question, however, was about the cooking and the baking process. There was not enough information given in the recipe about the first step of the cooking. I just assumed they would like me to cook the pudding on the stove (or the fire back in the 1800s) until it thickened. Then, there was no information at all about the baking process, besides the overall baking time of two hours. There was not even a general idea of what heat (high or low) to use, which I had to guess again, and decided on 350F.

Once I figured out the ingredients, the amounts, and answered some of the questions (by making educated guesses), I could start making the recipe. The first few steps were not that complicated. I simply added the ingredients except for the raisins to the saucepan. But then, the recipe stated that the mixture needed to thicken. I assumed they meant this should happen while it was on the stove, so this is what I did. I kept it on medium heat until the rice was partly cooked. At this point, it felt like the pudding had slightly thickened. It is then when I added the raisins as the recipe stated, transferred the pudding to a buttered dish, and put it in the oven. The recipe is also quite large, so I ended up with two dishes of rice pudding. 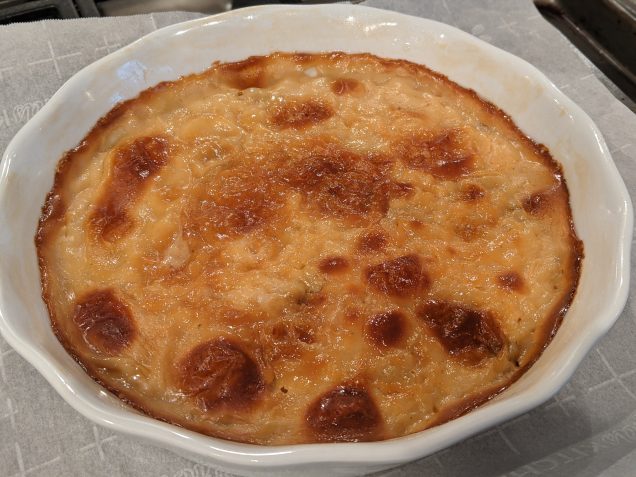 As mentioned above, no instructions were given about the baking besides the total baking time. However, whereas the recipe said two hours at 350F, it took only 50 minutes until the pudding was completely cooked. Once done, the pudding was golden and brown on top, and all the liquid (milk) was absorbed in the rice. It smelled really good. The rice was soft, and the pudding was very sweet, even too sweet to my family’s taste (and we love sugar in our house). That said, I would say this recipe overall was a success. It might scream for adding cinnamon and vanilla (and cutting off some sugar), but I was quite impressed by how good it was, considering it is an 1836 recipe.

As previously mentioned, the recipe yielded two dishes of rice pudding, and also had some little extra in the saucepan. I decided to experiment with the leftovers in the saucepan, and while the two dishes of pudding were baking in the oven, I continued to cook the leftovers on the stove, as this is my regular cooking method for rice pudding. The texture became more like a porridge (and not solid, as in the baked version), and again very sweet. Once again, a successful result. 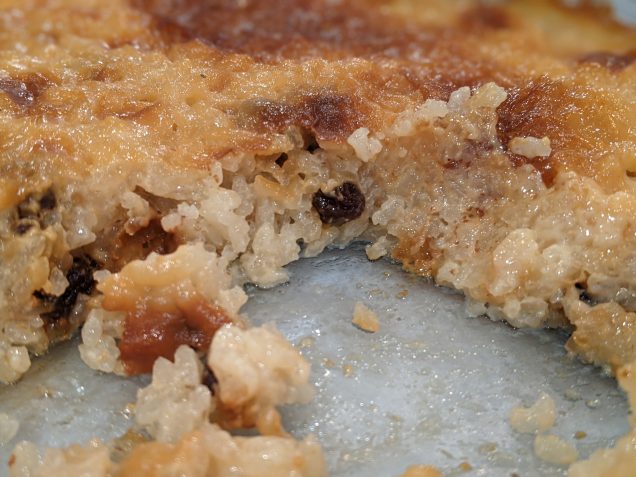 Overall this was a very interesting assignment. Going through the procedure of actually cooking the recipe teaches you a lot about the process of cooking, the available ingredients, and kitchen tools, and it raises questions that might have been missed by just reading the recipe. Rice pudding was always a favorite of mine. It always makes me smile and brings me back home, to my mom’s recipe, and my grandma’s recipe. Even though I would declare the 1836 recipe as a successful one, I will stick with my mom’s recipe for rice pudding. But whatever recipe you may choose, I guess one cannot really go wrong with a mixture of butter, milk, and sugar, right?