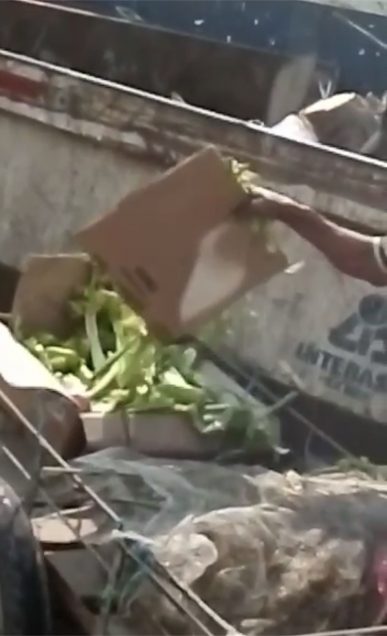 The hungry men were seen, followed by their valets, roaming the quais and guards’ quarters; gleaning from their outside friends all the dinners they could find; for, according to Aramis, in prosperity one should sow meals right and left, in order to harvest some in adversity.

On vacation in Santa Marta, Colombia, a coastal city east of Cartagena of around a half million people, I took an afternoon, accompanied by a guide, to visit an example of locals gleaning in the Granero Central, the public market of the city.  Sebastian (my guide) was proud of his city and assured me that the locals waste little food at the market.

Knowing that I was a Caucasian tourist (a “gringo”) there for the single purpose of observing locals and taking pictures, Sebastian suggested just driving by to observe, within the security of tinted automobile windows.

The market was bustling, with vendors selling fish, produce, textiles, and general goods on tables that lined the streets. Driving in what seemed like circles, Sebastian slowly positioned our car to enable observation of the spectacle he was so proud of. To the left side of the car were large dumpsters, each with several men rummaging through what appeared to be trash bags and food scraps. On the outside of the dumpsters were people instructing what the men should look for.  We passed them twice and, on the last lap, I saw a cardboard box newly positioned on a cart containing salvaged celery. It appeared perfectly fine and edible.

Sebastian explained that these rummagers (technically, gleaners) salvage the reusable goods and sell them in the stalls a few meters from the dumpsters at a fraction of the cost of the same items found in the market next door. Their customers are a “lower-class” group of people. Although neither governed nor regulated the system of salvaging works — it is simple. It provides an ample supply of food for this group of people struggling with limited income and resources. When contrasted with the gleaning that is popularized in Vancouver, Canada, this system is relatively profitable and has created a community. I felt it was the sense of community that largely made the process function and so my inclination was to accept it.

The Sustainable Development Goals (SDGs), as outlined by the UN, are missing a kind of mortar that might bind all the SDG initiatives as one: a mortar which earlier incarnations of UN development work took more into account when dealing with what it termed “the informal sector.” There are lessons we can learn from the rummagers and vendors in Santa Marta. The community appeared to be the mortar at the Granero General, offering an additional dimension to the issue of food waste while also creating an informal sector community alongside the “official” food market.  How can such a “community” become a priority, on a global scale, while outside of the “normal” corporate and government channels, regulations, and controls? After all, in much of the “developing world” significant percentages of the population work, live, and exist throughout their lives in the so-called informal sector.  How can we not only accept but find ways to support such a sector while important corporate and government entities deny (or at least fail to act on) the matter of climate change; while powerful religious organizations promote an anti-vaccination agenda; and other industries insist, still, on their right to reduce fish to the brink of extinction?

The perfect answer or solution remains to be seen. Still, these challenges inspire creativity to foster a sense of community that may oppose such denial and/or “anti-this and that.”

We watch the world come together, slowly, amid the zombie-like apocalypse called COVID-19. Must we wait for a food shortage for the world to come together to solve the food-waste problem? The signs are everywhere, and the writing is on the wall.

My experience in Santa Marta, although short, was inspiring.