This guest post is part of a continuing series written by students from Karen Metheny’s Cookbooks and History course. Mara Sassoon shares her experience with recreating a historical recipe for cocoa cake.

When it came to deciding on a historical recipe I wanted to recreate, I knew I wanted to make something chocolatey. What better source for such a recipe than the 1909 cookbook Chocolate and Cocoa Recipes by Miss Parloa and Home Made Candy Recipes by Mrs. Janet McKenzie Hill? The book features recipes from Maria Parloa and Janet McKenzie Hill that utilize Walter Baker & Co. chocolate products. 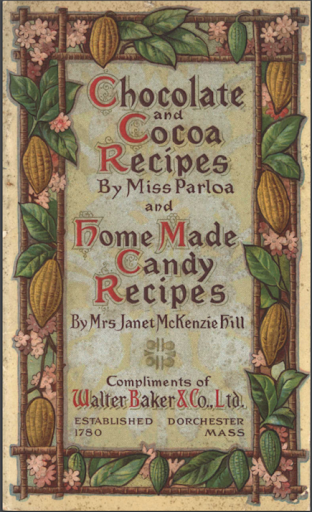 I decided I wanted to make a cake and settled on Parloa’s recipe for Cocoa Cake (1909, 25) because I already had the ingredients the recipe calls for on hand.

Here is the recipe: 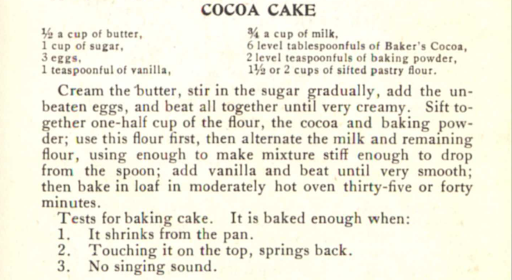 Though Baker’s brand chocolate still exists (the company is today owned by Mondelez International), Baker’s brand cocoa is no longer produced. I wound up using Hershey’s brand cocoa. I also didn’t have pastry or cake flour on hand, so I used all-purpose flour. The recipe was fairly straight forward. I started with very soft, unsalted Cabot butter, creamed it, mixed in the cup of sugar, then added all three eggs at once and beat those in. Typically, the more modern chocolate cake recipes I’ve made call for less eggs and often specify adding the eggs one at a time.

The recipe got a little bit vaguer from there: “Sift together one-half cup of the flour, the cocoa and baking powder; use this flour first, then alternate the milk and remaining flour, using enough to make the mixture stiff enough to drop from the spoon.” All in all, the recipe calls for 1 ½ to 2 cups of sifted flour. I wound up using 1 ½ cups. I whisked together the half cup of flour, cocoa powder, and baking powder in a separate bowl, then sifted that into the butter/sugar/egg mixture. I decided to interpret “alternate the milk and remaining flour” as pour some milk, mix, sift in some flour, mix, add more milk, mix, add more flour, etc. As mentioned, 1 ½ cups of flour seemed like enough—the batter was very thick.

After mixing in vanilla extract, I scraped the batter into a glass loaf pan that I had greased even though the recipe did not say to grease the pan. I think the cake would have stuck to the baking dish had I not done so. The recipe called for baking the cake in a “moderately hot” oven, which I interpreted to mean 350 degrees, for 35 to 40 minutes. I was excited that I found a historic recipe that specified baking time, however, when I pulled the cake out of the oven at the 35-minute mark, it was slightly soupy in the very middle. I baked the cake for another 10 minutes, but when I stuck a toothpick in the center to test its doneness, there was still a lot of batter on it. I put the cake back in the oven for another 15 minutes, conducted the toothpick test again, and concluded it was baked through. 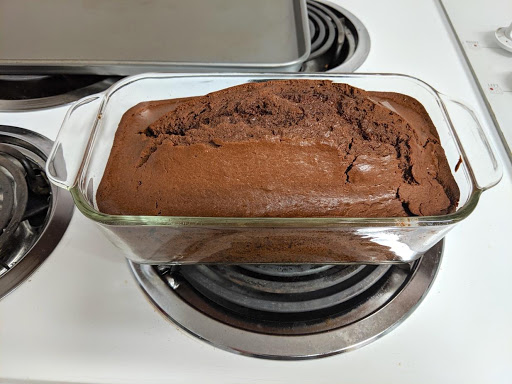 Parloa actually included three tips for determining if a cake is done with this recipe: “1. It shrinks from the pan; 2. Touching it on top, springs back; 3. No singing sound.” After baking the cake those last 15 minutes, I determined the cake fit the criteria for tips #1 and #2. As for step #3, my cake never sang to me throughout the baking process, but that would have been a welcome surprise!

After baking the cake, I thought, “Why stop there?” I decided I’d make Parloa’s recipe for Cocoa Frosting (1909, 24) to top the Cocoa Cake. 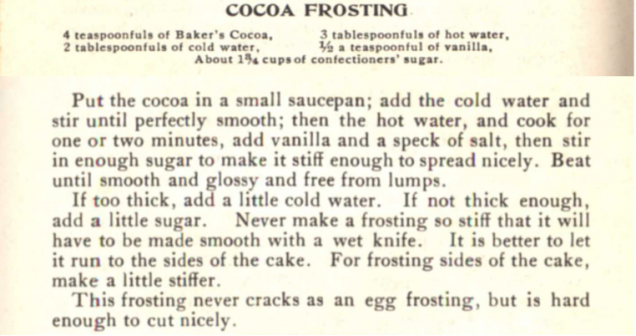 Again, I used Hershey’s cocoa powder instead of Baker’s. This is a very simple frosting recipe, calling for only cocoa, hot and cold water, vanilla, confectioners’ sugar, and salt. I mixed the cocoa and cold water in a saucepan, then added the hot water. The recipe got confusing when it said “cook for one to two minutes.” I decided I’d cook the mixture on medium heat, adding in the vanilla, salt, and sugar as it was cooking.

This was an extremely thin mixture, so I turned the stove temperature down to low and heeded the recipe’s advice: “If not thick enough, add a little sugar.” I wound up having to add more than “a little” more sugar—about another cupful—until I thought it seemed somewhat thicker. I poured the frosting into a glass Pyrex container and refrigerated it overnight; the refrigeration helped it get a little thicker, too. 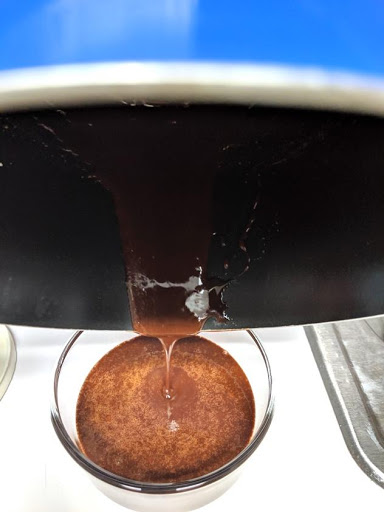 I poured it on the cake next day, the same day I was to bring the cake into class. After sitting at room temperature all day, the frosting thinned again by the time it came to present the cake in class. But, since it seeped in throughout the day, I think it actually added a little necessary moisture to the cake, which was a little drier and denser than I was expecting (possibly from using all-purpose flour). Perhaps if I had followed Parloa’s recipe to a T, it might have been a bit lighter and fluffier. Nonetheless, the cake turned out quite tasty. 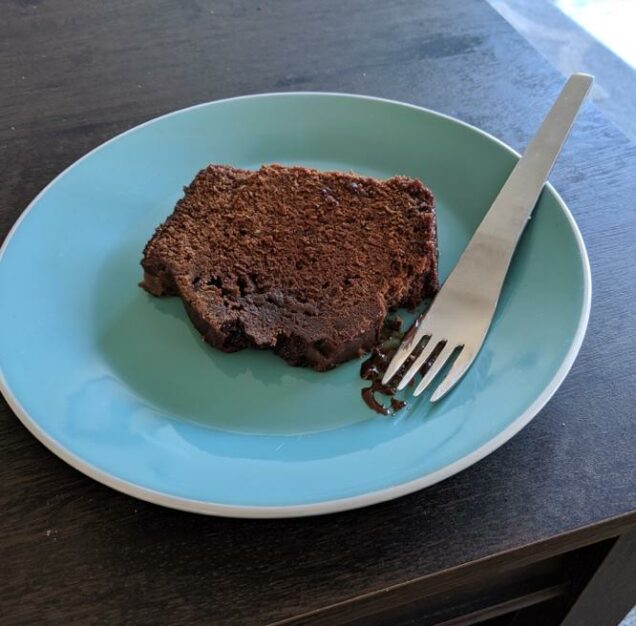