This post from Gastronomy Student Hannah Spiegelman continues our series from students in Anthropology of Food.

I had never heard of Proust or his madeleine before starting the Gastronomy program at BU, but his famous moment has been talked about or mentioned in almost every class I have taken thus far. In his book, In Search of Lost Time, Proust (1913) takes inspiration from his own life, turning his childhood holiday home in the Loire Valley into the fictional town of Combray, France. The moment that all food studies people, anthropologists, and others have hence talked about occurs when Proust’s narrator (never-named) is offered tea and “petites madeleines.”

Many years had elapsed during which nothing of Combray…had any existence for me, when one day in winter, on my return home, my mother, seeing that I was cold, offered me some tea, a thing I did not ordinarily take…. She sent for one of those squat, plump little cakes called “petites madeleines….” I raised to my lips a spoonful of the tea in which I had soaked a morsel of the cake. No sooner had the warm liquid mixed with the crumbs touched my palate than a shudder ran through me and I stopped, intent upon the extraordinary thing that was happening to me…. I sensed that it was connected with the taste of the tea and the cake, but that it infinitely transcended those savours, could, no, indeed, be of the same nature….Undoubtedly what is thus palpitating in the depths of my being must be the image, the visual memory which, being linked to that taste, is trying to follow it into my conscious mind.

As soon as Proust’s character tastes the madeleine dipped in tea, he experiences an overwhelming feeling of a past time, although he can’t imminently place it. With more tastes, the memory unfolds:

The taste was that of the little piece of madeleine which on Sunday mornings at Combray…when I went to say good morning to her in her bedroom, my aunt Léonie used to give me, dipping it first in her own cup of tea. The sight of the little madeleine had recalled nothing to my mind before I tasted it; perhaps because I had so often seen such things in the meantime, without tasting them…that their image had dissociated itself from those Combray days to take its place among others more recent; perhaps because of those memories, so long abandoned and put out of mind, nothing now survived, everything was scattered; the shapes of things, including that of the little scallop-shell of pastry, so richly sensual under its severe, religious folds…had been so long dormant as to have lost the power of expansion which would have allowed them to resume their place in my consciousness. But when from a long-distant past nothing subsists, after the people are dead, taste and smell alone, more fragile but more enduring…more faithful, remain poised a long time, like souls, remembering, waiting, hoping; and bear unflinchingly, in the tiny and almost impalpable drop of their essence, the vast structure of recollection.

A person’s “senses also interact with memory in the creation of foodways, as Marcel Proust showed by reconstructing and entire social world through the taste and smell of a madeleine” (Tierney and Ohnuki-Tierney 2012, 120). Proust’s character is vividly transported home through his taste experience:

And as soon as I had recognized the taste of the piece of madeleine soaked in her decoction of lime-blossom which my aunt used to give me…immediately the old grey house upon the street, where her room was, rose up like a stage set to attach itself to the little pavilion opening on to the garden which had been built out behind it for my parents….and the whole of Combray and its surroundings, taking shape and solidity, sprang into being, town and gardens alike, from my cup of tea.

Smells and tastes have the power to send people places in their past. Erdinç writes, “The smells and tastes, each time I trace them, in various phases of my own story, like the pebbles in the Hansel and Gretel story, take me home. Putting the pieces together, the picture appears as yet another rendering of the narrative of the self” (Erdinç 2001, 98). Erdinç clarifies that not all taste memories are positive and can equally appear with beloved and hated foods. The point here and that Proust made over 100 years ago is that scents and tastes hold powerful and potent connections to our past, whether that’s a figure from our childhood, a beloved home, a special trip, or an experience of commensality.

I have a culinary concept called A Sweet History in which I make ice cream flavors inspired by historic figures, events, art, etc. The point is to relay history through something accessible like everyone’s (for the most part) favorite frozen food. This long-term project has also helped me delve into stories I wouldn’t have otherwise. While on my quest of teaching others, I learn as well. I often turn my papers and projects into ice cream flavors in order to explore the subject further. Perhaps it has something to do with embodying knowledge. Even though I am not recreating traditional recipes, taking the time to cook my base, bake my mix-ins, and churn the final product allows me to think deeply about the flavor’s story. Despite not usually having a personal connection to these stories, turning the stories into a physical (and edible) product enhances their meaning. Warin and Dennis (2005) write about how Iranian female immigrants “give meaning to place and memory through the everyday practices of cooking and embroidery.” Of the senses, they write, “The senses are intertwined in a synesthetic knot in which memory is embodied and reproduced” (2005, 150). Acts of eating and cooking and creating allow for memories to resurface and be remade in a different light.

While I can’t say I’ve had as strong and similar a taste memory moment as Proust with a madeleine, here is my madeleine memory that came to mind when creating the ice cream I call “Proust’s Madeleine Moment:”

I had loved madeleine cookies for years, but I ate more that winter in France than I had in all those years combined. For four days in mid December 2015 and another four in mid January 2016, I stayed with my best friend, Rachael, in her southern-French four-story walk-up. She had two weeks off teaching English to French school children, which I took as an excuse to make a month-long vacation. Rachael was in the habit of buying jumbo bags of madeleines for only a couple euros at her local grocery store. They were cheap, but tasty and addictive. We easily ate seven in one sitting. One humid yet cool afternoon, we were sitting on the small couch in Rachael’s living room, munching on the small cakes, when her know-it-all annoying roommate interjected into our conversation. I had mentioned to Rachael that my throat had started to hurt and she offered to make a cup of tea. “What kind do you have?,” I pondered. “I think we have green,” Rachael replied, knowing that was my preferred tea of choice. Her roommate challenged her. “We only have English breakfast right now,” she said and then condescendingly, “it’s a type of black tea.” I lowered the madeleine I was holding from my lips and looked baffled at Rachael. Had her British-Canadian celiac roommate just explained to me what English breakfast tea was? Later, when it was just the two of us again with our mass-produced madeleines, we laughed and laughed. She would never know the beauty of eating soft springy madeleine after madeleine. 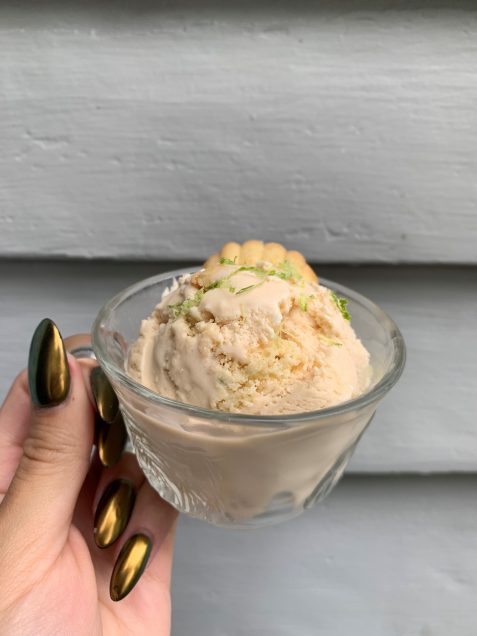 Erdinç, Ferda. 2001. Journeys through Smell and Taste: Home, Self, Identity. In Food and the Memory, edited by Harlan Walker, 91-99. Totnes, UK: Prospect Books.

Itineraries of Taste. 2019. Proust and the Madeleine. Date of access, June 26, 2019. https://itinerariesoftaste.sanpellegrino.com/dk/how-we-were/proust-and-madeleine