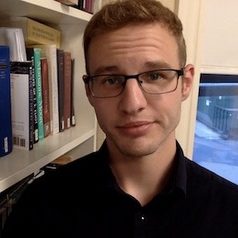 I research British literature primarily, focusing on the late nineteenth century through the mid-twentieth, and on poetry and poetics broadly. I look at modernism’s conflicted relationship to aesthetic experience, especially as it inherits forms of Victorian aestheticism, and consider how the aesthetic might substantiate, instead of distract from, ethical engagement; how it might mitigate ironism; how it might permit and guide forms of post-critique scholarship; how it intertwines with fin-de-siècle theories of experience and personality. I am more recently interested also in determinist tendencies in aestheticism. Some authors I’m currently writing about: Walter Pater, Thomas Hardy, Charlotte Mew, Virginia Woolf, Joseph Conrad, W. H. Auden and Samuel Beckett.

Writing:
I have forthcoming articles on the poet Keith Douglas: “The Cynic and Lyric Balanced: The War Dead and the Lyric Beloved” in Twentieth-Century Literature, 66.1 (Spring 2020); and an essay on aesthetics: “Walter Pater, Roland Barthes, and Aesthetic Idiosyncrasy: A Critical Experiment in Paideia,” Paideuma: Modern and Contemporary Poetry, 45 (2019).  I’ve also written about translation theory: “Mandelshtam’s Ovid: Translating Poryv’ into English,” Translation Studies, Vol. 11.3 (2018): 260-279; and on Samuel Beckett: “The Lover’s Endgame in ‘Extreme Solitude’” in Beckett Beyond the Normal, ed. Seán Kennedy (Edinburgh University Press, forthcoming); “the things that were told…” The Beckett Circle (Spring 2018), and “The fable of one fabling of one with you in the dark”, The Beckett Circle (Spring 2019).