The End of Dams: Removal and River Restoration

America has a love-hate relationship with dams. As a nation, America has built “on average, one dam per day since the signing of the Declaration of Independence.” Individually, dams have existed in America since long before the states revolted against Great Britain. Massachusetts has the oldest dam listed in the National Inventory of Dams, the Old Oaken Bucket Pond Dam (see slide 21) in Plymouth County, which was built in 1640. The dams started small, as mill dams on small streams for specific towns, but have grown in size to hundreds of feet tall, damming some of the largest rivers in America. Dams are often used (see slide 14) for hydroelectric power, irrigation, flood control, and the vaguely defined “recreational use.” Despite this love of “biggering and biggering”, America has failed to maintain many of the dams constructed, leading to the dangers we now face on a local, state, and federal level. Dams are also harmful to rivers, causing a depletion of fisheries, degradation of river ecosystems, and degradation of river water quality. This article will briefly discuss what Massachusetts has done to address these issues, mainly by removing dams that are a hazard. 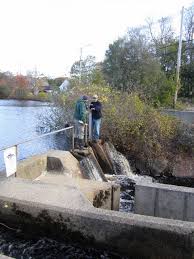 In Massachusetts, a failure to maintain dams has led to crises where towns have been evacuated at the threat of a dam bursting. An example is the Whittenton Pond Dam, in Taunton, Massachusetts, where in 2005, after days of rain, the 170-plus-year-old dam nearly collapsed. Close to 2,000 residents were evacuated due to fears of a six-foot high wall of water rushing through the town. Thankfully, the local government and the state were able to mobilize an emergency response team that stabilized the dam; at a cost of over $1.5 million. If the dam had collapsed, the damage, physically and financially, would have been far greater.

Massachusetts has approached dam removal in multiple ways. After the Whittenton Pond Dam emergency, the Office of Dam Safety was rejuvenated and given funding to evaluate the nearly 3,000 dams, in varying states of disrepair, spread across the state. Massachusetts passed “An Act Further Regulating Dam Safety, Repair and Removal”, emergency legislation to increase dam safety and encourage dam removal, in late 2012. The Act passed with support from multiple parties and interests, including the Nature Conservancy, municipal associations, water suppliers, engineering professionals, and other conservation organizations. This law gave various commissions and agencies more authority to respond to dam repair and removal issues, and set up ongoing funding for the repair or removal of dams, seawalls, and other water infrastructures. The various authorities must submit an annual report on the status of the dams in the state. The Massachusetts Office of Dam Safety, the Division of Ecological Restoration, and other agencies are required to assess dams, ensure dam owners have emergency action plans (EAPs), ensure that dam owners address safety issues, establish an inspection process and schedule for dams, and assess fines for noncompliance. Massachusetts provides grants for design costs of removal projects, which is an additional incentive to encourage dam owners to remove dams in noncompliance or that no longer perform the function for which they were built.

Massachusetts G.L. c. 29, §2IIII established the Dam and Seawall Repair or Removal Fund, which operates under the Secretary of Energy and Environmental Affairs and offers grants to local government bodies, charitable organizations, and private dam owners to finance inspection, repair, and removal projects for dams, seawalls, jetties, revetments, retaining walls, levies, and other means of flood control. Often, it is less expensive to remove an old, dilapidated structure than to repair it, so owners will perform removal projects rather than repair projects. Along with removing the dam, the legislature has delegated power to administrative agencies to help encourage restoration of the river after the dam is removed. One of the earliest dam removal projects in Massachusetts (see page 118) was intended to increase public safety and river accessibility for recreation, but also to increase bordering vegetated wetland on the river and to improve and restore access to cold-water habitat.

So far, Massachusetts has avoided removing dams that were built for flood control purposes, opting instead to encourage repairs. However, Massachusetts considers dams built for nearby industrial use, other hydropower purposes, irrigation, or recreational use as fair game for removal. This decision is consistent with policy for many states and the federal government. This policy is especially relevant when the use has been abandoned, public safety is at risk, or the dam is in disrepair and the owner either cannot be found or refuses to pay to maintain the dam. 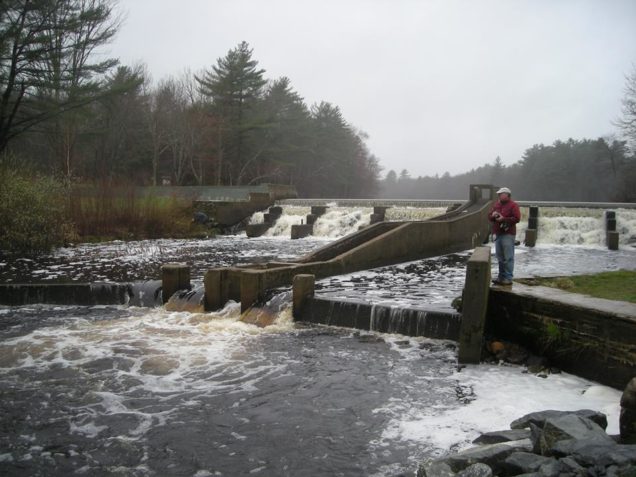 Thankfully, Massachusetts is well on its way to removing the more problematic dams and restoring its rivers and streams. The Division of Ecological Restoration has assisted multiple dam owners with the removal and restoration process, including the Whittenton Pond Dam that nearly collapsed in 2005. After the passage of the Dam Safety Act, the Whittenton Pond Dam was removed in 2013-2014 as part of an initiative by the Division of Ecological Restoration and the Mill River Restoration Project. The Morey’s Bridge Dam had a fish ladder constructed rather than have the dam removed. Two other dams on the Mill River, the Hopewell Mills Dam and the West Britannia Dam, have either been removed or are in the process of being removed. Upon completion, over 50 miles of stream habitat and 400 acres of pond habitat will open up, rejuvenating the cold-water fisheries and allowing river herring (an endangered species), American eel, and other migratory and resident fish to enter the ecosystem. Although there are objections to the removal of these historical dams, as some communities consider the dam an inherent feature of their town, objections can be assuaged by the preservation of portions of the dam that do not interfere with the river system.

The Division of Ecological Restoration’s actions are an important change to Massachusetts’ environmental policy. Most of the environmental protection laws are focused on maintaining the status quo, and on protecting the water resources from impacts. Removing dams, however, has a proactive and positive impact on water resources by changing the river or stream. The process of permitting the dam removal still takes longer than it should. The Division of Ecological Restoration and other agencies have proposed changes to the state permitting process, allowing aquatic restoration projects like dam removal to go through a permitting process that is easier and more streamlined, which can reduce costs and shorten permitting timelines. This is needed so that dams are removed before they become a hazard to the surrounding area. A faster permitting process will also help dam owners who cannot afford to maintain their dam for an indeterminate amount of time.

Dams have been an integral part of America’s history, however, the time has come to end the era of dam construction. Dams do not have an eternal lifespan, and often no longer serve the purposes for which they were originally built. The costs of maintaining degraded dams often exceed those of removing the dam and restoring the river system. The benefits of dam removal go beyond just the immediate area of the dam, and removing a dam, when planned in conjunction with removing or updating other dams on the river system, can help bring river ecosystems back to life. Massachusetts’ legislature began the process with the Act Furthering Dam Safety, Repair, and Removal, and should continue to fund the grants for removing dams around the state.

Rachel Watsky graduated from Boston University School of Law in May 2018 and plans to practice environmental law.