The Faces of Trauma: Migrant Children 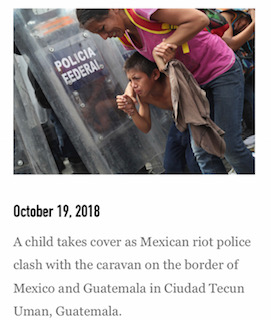 Look at the face of this little boy. Does he look like a criminal or someone who wants to come to our country to stir up trouble? Look at his mother’s face the look of desperation as she must feel helpless not just for her plight but for her inability to calm her child down. The most recent caravan loaded with refugees coming from Central America are leaving their country plagued by violence and poverty. It is estimated that the caravan is loaded with approximately 9,300 refugees and 2,300 are children traveling towards the USA seeking asylum (Schlein, 2018). Our US present Donald Trump has referred to these groups of people as “Stone Cold Criminals” and has gone as far as deploying 15,000 troops to San Ysidro to secure the border which is the exit and entry from the Tijuana borderline. Our president has instructed the US troops to use all force necessary and even made threats to close the border permanently if necessary. The caravan immigrants have settled in the city of Tijuana, Mexico near the border. Only 100 applicants per day are being processed and with the long waits in line on top of the migrants that are expected to arrive, this lead to an act of desperation and violence between the US agents and the refuges that have made attempts to cross the border illegally last month. US agents fired tear gas at both adults and children and many were arrested trying to cross the border illegally. It may take months or even years for cases to get processed and heard. Some of the migrants are heading back home while others along with their children are still camping out in the city of Tijuana, Mexico clinging on to hope (Gomez & Jansen, 2018). 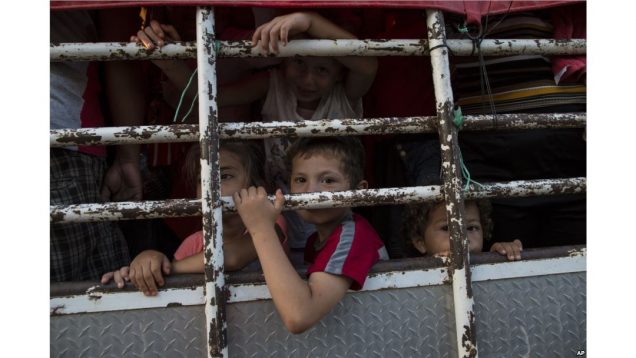 As the wait for asylum petitions continue, other children and families travel on cattle trucks (see above picture), cargo trains, or get a lift from kind people as they slowly make their way through Mexico towards the US border. This is a dangerous journey these families are making as they risk getting assaulted, robbed, raped, or even killed.             Meanwhile what happens to these children as they embark on this journey initiated by their parents and caretakers? What goes on in their minds as they are faced with an unwelcoming government via excessive force? They are fleeing their homeland plagued by violence and poverty only to meet with an uncertain future and the possibility that they may have to return back home if their petitions for asylum are denied, that is if their petition is ever heard. Lynn Smithwick facilitator for METCJ 725 covered some valuable information on types of trauma during Module 5 live lecture. In this live lecture it was mentioned that children are “fragile” and witnessing any type of trauma can have an adverse effect in a child’s life. Smithwick addressed four types of vicarious trauma:

Smithwick stated that exposure to trauma can occur from events such as being in a car or other serious accident; having a significant health concern or hospitalization; sudden job loss; losing a loved one; being in a fire, hurricane, flood, earthquake, or other natural disaster; and experiencing emotional, physical, or sexual abuse (Smithwick, 2018: Module 5). What types of trauma do you think these children have been exposed to? All four! They are leaving their loved ones behind in their quest for a better future, their life has been a constant exposure to violence, their exposure has been a chronic one, and the system from where they come from and where they are going are not making things any better for them as they move from camp to camp waiting for their turn to have their case heard. 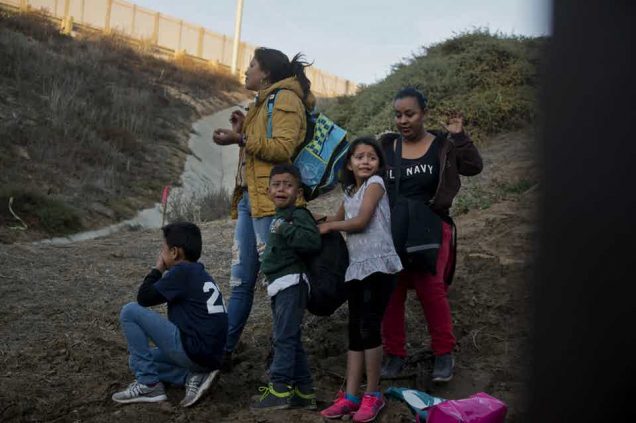 Here a family surrenders to US Border Patrol after crossing the border wall into the US on December 2, 2018.

Syeda Javeria Hasan, a student from the University of Waterloo, wrote an analysis about the challenges a parent can face during this caravan journey. Hasan reports that the six week journey can hit children the “hardest” because of the physical requirements they are exposed to during this travel. This can impact parent and child relationship. Refugee parents and children often exhibit symptoms of PTSD, anxiety, and depression. This can leave parents feeling emotional worn out which can lead to “over-protectiveness, harsh discipline, and a reversal of parent/child roles”. Hasan reports that as the caravan migrants traveled the 4,000 kilometers from Honduras to Tijuana, Mexico, they are more prone to fevers, eye infections, lice infestations, respiratory illness, and dehydration. As the city of Tijuana makes efforts to provide shelter to the thousands of migrants as they arrive, the shelters are not in the most hygienic conditions and this only increases the health concerns of children since they are more vulnerable to diseases. Over time the strain this add to parenting can lead to low nurturance and low responsive to needs of the child. Hasan reports that when exposed to constant community violence, parents starts to feel “hopeless, powerless, emotionally overwhelmed”, leading to symptoms of anxiety, depression, and PTSD. Parents can also start to dissociate and have a decrease in understanding their child’s own psychological distress. This can result in a child developing emotional challengers, learn to disengage, and develop similar coping mechanisms as their parents (Hasan, 2018). Leaving behind their culture just to get away from the violence only to face a new form of uncertainty in a foreign country these migrants will have to adapt as they seek shelter and make their way towards the US border in hopes of obtaining political asylum, is troubling enough and not to mention what the children are being exposed to.  Is there hope for these people as they await their fate at the border? 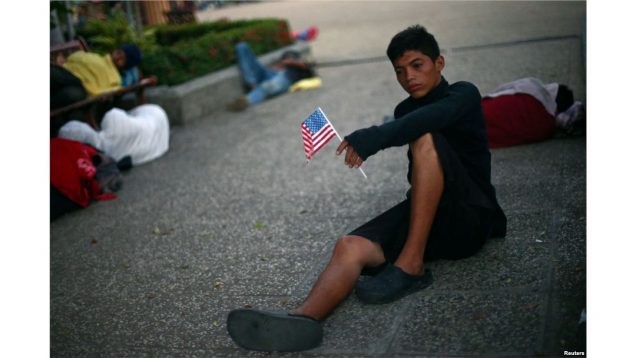 A youth from Honduras rests in a public area in Tecun Uman, Mexico enroute to USA as he waits to re-join with more migrants.

This picture breaks my heart just like the rest. This young man can be my son. Look closely at his face; he seems to have psychologically tuned out in order to endure the hardship that awaits him but prefers to risk it all in hopes of making it past the US border. President Trump is trying to make them go away and return them back to their homelands. One federal judge stated that our president can’t do that. US district judge Jon Tigar has suspended the administration’s new policy to cut off asylum to immigrants who enter this county by illegal means. The Immigration and Nationality Act of 1965, states that “any foreigner who arrives in the USA, whether or not at a designated port of arrival, may apply for asylum” (Gomez & Jansen, 2018). President Trump cannot overturn a law that was specifically made to give asylum from those who seek it. I understand that criminals may be on their way with the caravan but not everyone is a criminal. Instead of deploying thousands of troops to protect the US border why not increase the staff at the port of entry in order to thoroughly and swiftly process petition applications in order to alleviate some of the strain and chaos this whole event has caused. That way immigrants can decide based on their petition response, whether to make Mexico their new homeland, seek asylum at another county, or reunite with their loved here in the USA if entry access is approved. Anything is better than keeping them camping at the Mexican border, especially for the already vulnerable groups: the children.

Hasan, S. J. (2018). The challenges of parenting in a migrant caravan. Retrieved December 10, 2018, from https://theconversation.com/amp/the-challenge-of-parenting-in-a-migrant-caravan-107875

Picture of child with mother copied November 29, 2018,  from www.gettyimages.com