The incarceration of veteran’s is a growing area of concern as many return from overseas bearing wounds, invisible to the average person. But what is it that leads many of these veterans – individuals that have volunteered to risk their lives for our country – what leads them to criminal behavior? Although there is still little research in this area, many attribute Post Traumatic Stress Disorder (PTSD) and traumatic brain injury (TBI) as the link between those veterans that turn to devian 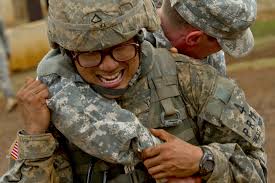 t behavior and those that don’t. Furthermore, many veterans find themselves involved with illegal drugs, prescription painkillers, or alcohol which often contribute to negative behavior.

Today’s wars vary significantly from those fought in the past. To begin with the modern day battlefield is fought using counterinsurgency warfare where the enemy is often not evident and can easily blend with the everyday civilian. This creates a distortion as to where the battle ends and the time for rest and rejuvenation begins. Because Soldiers are constantly on the guard, they are often on edge with little time to digress and renew mentally and physically. Furthermore, because of the high operational tempo Soldiers are deployed more often and with less time to reset time in between deployments. The advances in protective equipment has also introduced another factor that was not previously seen – Soldiers today tend to survive catastrophic events more frequently than they have in the past. With that said, they take with them severe, often life-changing, injuries such as partial paralysis or loss of limbs. This cycle of continual, back-to-back deployments and the modern day Soldier’s experience and ability to survive high-stress, horrific events leads them to be susceptible to PTSD.   Furthermore, the common weapon used on today’s battlefield by enemy insurgents is the Improvised Explosive Device (IED) which is a frequent contributor to TBIs. PTSD, TBI’s and major depression are often called the “invisible three,” as they all affect the Soldier internally and are not visible from the outside.

As previously stated PTSD, TBI and major depression are thought to be key contributors to veterans and criminal behavior. PTSD can lead to antisocial behavior, increased irritability and aggression, and can contribute to poor decision-making. Because many individuals that experience PTSD from combat experience feel the need to be continually on the guard, these individuals may react to situations in a way that is not proportional to the event. TBI’s are often difficult to diagnose and treat and there is still much to be understood about this type of brain trauma. TBIs can affect different individuals differently depending on the severity and specific injury. This can also be associated with poor decision-making. Major depression can also add to the veteran’s pain by robbing them of the
appropriate cooping mechanisms to deal with their traumatic experiences. Although there is still much to be learned, research has shown that individuals that deal with these conditions are more susceptible to crime and to recidivism.

Another contributor to veteran engagement in crime is the use of illegal substances. Often in an attempt to mask their pain, these individuals turn to alcohol or drug use. This combined with their questionable mental state leads to a spiraling, downward effect. An individuals loses their job because of their excessive substance abuse, turns to robbery as a method to fund their addiction, becomes increasingly irritable and aggressive as a result of their illegal substance use and mental illness, and eventually their temper erupts and they find themselves being charged with an assault, or worst.

Today’s veterans experience a significant amount of trauma and stress, yet, are often overlooked in getting the treatment they need. Because of this, their susceptibility to mental health issues, and the lack of renewal time, it is no wonder the number of veteran offenders is ever increasing. Fortunately, many jurisdictions are implementing veteran’s treatment courts, which focus more on the treatment and rehabilitation of the veteran, rather than the simple punishment of the individuals. However, in order to truly reduce the number of veteran offenders, help needs to be offered much earlier to prevent the downward spiral of negative events. Without the preventative intervention, we will continue to see a high number of veterans processing through the criminal justice system.