This week, communication scholars, practitioners, and educators from around the world are congregating in Toronto, Canada for the Association of Education in Journalism and Mass Communication (AEJMC)'s 102nd annual conference. Many members of the BU COM community—including some of the CRC's research fellows—will be in attendance to share their scholarly work and convene with colleagues around this year's theme, "Investing in Our Futures."

Below is a list of AEJMC conference presentations and panels featuring BU COM and CRC-affiliated faculty and doctoral candidates (click image to view full-size):

END_OF_DOCUMENT_TOKEN_TO_BE_REPLACED 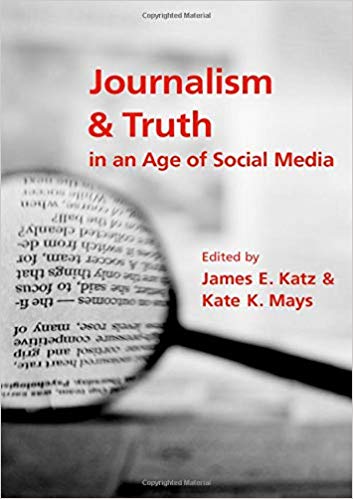 Truth qualities of journalism are under intense scrutiny in today's world. Journalistic scandals have eroded public confidence in mainstream media while pioneering news media compete to satisfy the public's appetite for news. Still worse is the specter of "fake news" that looms over media and political systems that underpin everything from social stability to global governance.

This volume aims to illuminate the contentious media landscape to help journalism students, scholars, and professionals understand contemporary conditions and arm them to deal with a spectrum of new developments ranging from technology and politics to best practices.

Fake news is among the greatest of these concerns, and can encompass everything from sarcastic or ironic humor to bot-generated, made-up stories. It can also include the pernicious transmission of selected, biased facts, the use of incomplete or misleadingly selective framing of stories, and photographs that editorially convey certain characteristics. This edited volume contextualizes the current "fake news problem." Yet it also offers a larger perspective on what seems to be uniquely modern, computer-driven problems. We must remember that we have lived with the problem of people having to identify, characterize, and communicate the truth about the world around them for millennia.

Rather than identify a single culprit for disseminating misinformation, this volume examines how news is perceived and identified, how news is presented to the public, and how the public responds to news. It considers social media's effect on the craft of journalism, as well as the growing role of algorithms, big data, and automatic content-production regimes. As an edited collection, this volume gathers leading scholars in the fields of journalism and communication studies, philosophy, and the social sciences to address critical questions of how we should understand journalism's changing landscape as it relates to fundamental questions about the role of truth and information in society.

James E. Katz is Feld Professor of Emerging Media at COM, where he directs its Division of Emerging Media Studies. He has been awarded a Distinguished Fulbright Chair to Italy, fellowships at Princeton, Harvard, and MIT, and the Ogburn Career Achievement Award from the American Sociological Association. Dr. Katz is an elected fellow of the International Communication Association and the American Association for the Advancement of Science (AAAS).

Kate K. Mays is completing her PhD in Emerging Media Studies at COM and is a Graduate Student Fellow for computational and data-driven research at the Rafik B. Hariri Institute for Computing and Computational Science & Engineering at Boston University. She has presented her research findings at a variety of international conferences and in several journals. After graduating from Georgetown University, she worked in the publishing industry before coming to Boston University for advanced studies.

Both Guo and Wells have worked extensively with big data, both as a research method and as a topic of interest in and of itself. Their research utilizes computational methods to explore online media phenomena such as fake news, filter bubbles, and the influence of algorithms on news consumption.

Full story available on the BU Today website: "What You Read and Watch is Changing Media Forever" 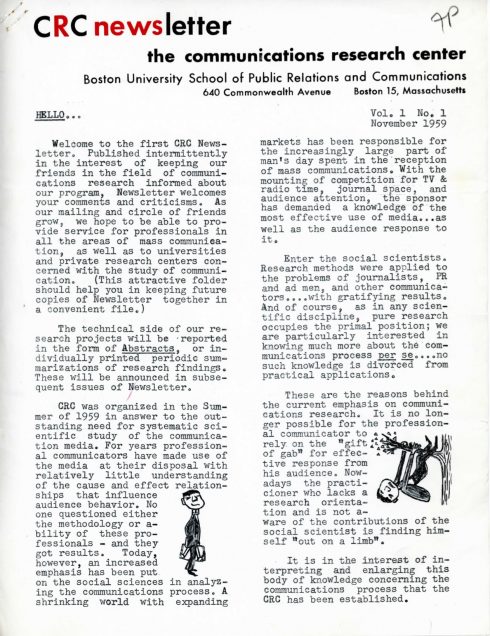 Recently, the Communication Research Center received an unexpected and exciting email. Attached was a scanned copy of the first-ever CRC newsletter, published in November of 1959 (the year the CRC was established).

We are so thrilled to have this documentation of the CRC's rich history and hope you enjoy learning about the center's early research endeavors as much as we have.

Many thanks to John W. Holman for getting in touch and mailing us the original document, which will be framed and displayed at the CRC.

Learn more about the history of the CRC (article by Dr. Michael G. Elasmar) 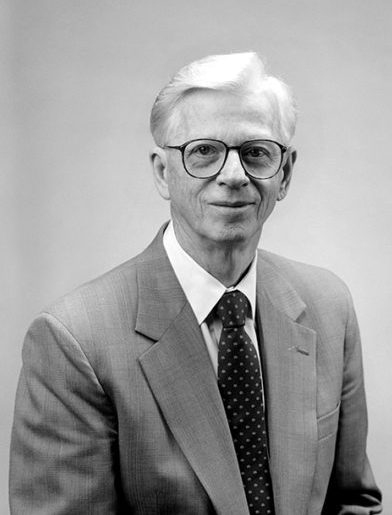 Dr. DeFleur conducted pioneering academic research in the communications field, authoring over a dozen books—including the widely-cited textbook “Theories of Mass Communication," which has been translated in 10 languages. At Boston University, he served as both a faculty member and chair of COM's Mass Communication, Advertising and Public Relations department. In 2011, the Communication Research Center created the Dr. Melvin DeFleur Distinguished Lecture Series, a tribute to his groundbreaking contributions to mass communication research and his valued membership at the CRC.

The award will be presented during the AEJMC's August 2019 Conference in Toronto, Canada.