Scientists from the CNRLab presented their newest research in five talks at the 2019 International Congress of Phonetic Sciences in Melbourne, Australia. Download copies of our proceedings papers below:

Did you know it's harder to recognize someone by the sound of their voice if they are speaking a foreign language?

In the new issue of The Nerve, the undergraduate journal published by the BU Mind and Brain Society, CNRLab undergraduate Michelle Njoroge writes about her research on the language-familiarity effect in talker identification.

Explore our research publications on the language-familiarity effect.

Language, working memory, and the brain at SfN 2018

Terri Scott, CNRLab member and PhD candidate in Neuroscience, presented her new research on functional convergence and divergence of the neurocomputational architectures for language and working memory at the recent meeting of the Society for Neuroscience in San Diego Terri discovered that just because there is functional overlap between two tasks in a particular brain area, that does not necessarily mean that they are supported by the same computational architectures in the underlying neural response.

Terri received a Trainee Professional Development Award from the Society for Neuroscience for this work.

The Perrachione Lab has been awarded a grant from the National Science Foundation (NSF) to study whether formal musical training is associated with enhanced neural processing and perception of sounds, including speech in noisy backgrounds. Music forms an important part of our lives and is one of the few universals shared by all human cultures. This project will test the hypothesis that early musical exposure has benefits that extend beyond music to critical aspects of human communication, such as speech perception in noise.

Title: "NeuroDataRR. Collaborative Research: Testing the relationship between musical training and enhanced neural coding and perception in noise."
Project Number: 1840818
Read more information about this grant at the NSF.

The Perrachione Lab has been awarded a grant from the National Institutes of Health (NIH) to study differences in brain anatomy in individuals with dyslexia. This project will study a collection of brain scans from over 1,200 children and adults with dyslexia or typical reading. Using these brain scans, we will determine whether any features of brain anatomy (such as morphology, morphometry, and cortical geometry) are related to reading ability or reading impairment. 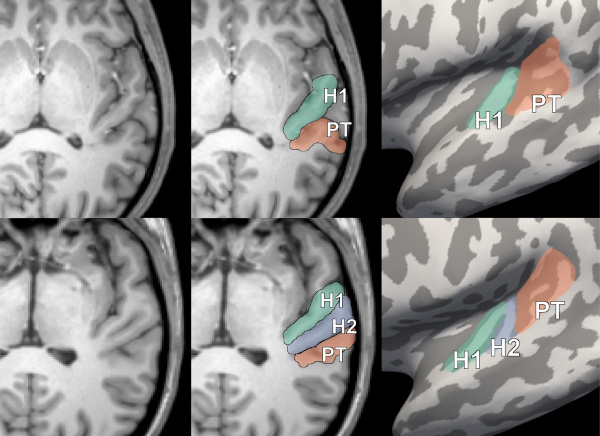 Brain scans showing differences in gross cortical morphology of the temporal lobe. The top row shows a brain with a single convolution of Heschl's gyrus (H1); the bottom row shows a different brain with a dual convolution (reduplication) of this gyrus (H2). (PT, planum temporale). This study will examine wither this, or any other anatomical feature, is associated with development of reading skills.

Led by the Perrachione Lab at BU, a nation-wide team of collaborators are contributing to this project, including scientists at MIT, Harvard Medical School, Massachusetts General Hospital, Boston Children's Hospital, the University of Delaware, Northwestern University, and the University of Washington. This project is supported by the Eunice Kennedy Shriver National Institute of Child Health and Human Development (NICHD).

Mapping clinical tests of language and working memory at SNL 2018

Terri Scott, CNRLab member and PhD candidate in Neuroscience, presented her new research on the brain bases of nonword repetition - an important clinical assessment of language skills - at the recent meeting of the Society for the Neurobiology of Language in Quebec City. Terri discovered that the parts of the brain responsible for nonword repetition are also recruited for both language processing and working memory.

Talker Variability at ASA 2018 in Minneapolis

Scientists from the CNRLab presented two new research studies on perception and cognition of talker variability at the May 2018 of the Acoustical Society of America in Minneapolis, including the results from a Sargent Senior Thesis for Distinction completed by lab alumna Kristina Furbeck. Download copies of our presentations below:

Decoding the brain in unprecedented detail

Areas of the brain active when listening to spoken words.

CNRLab scientists are using the new Siemens 3T Prisma scanner at the BU Cognitive Neuroimaging Center to study how the brain consistently recognizes speech in different contexts. Read more about our experiences with the new imaging center in this article from BU Today. 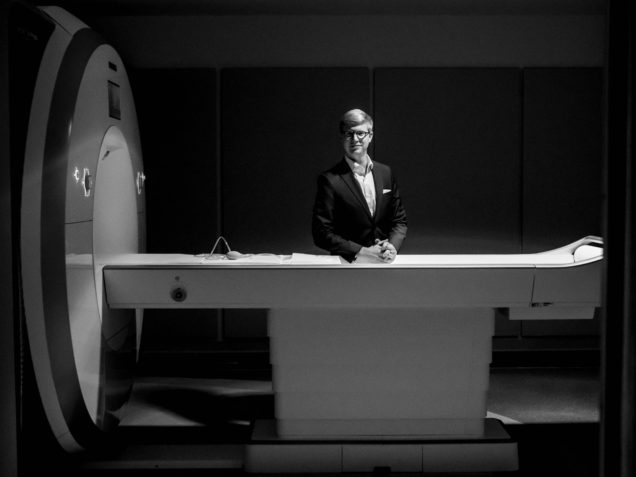 Scientists from the CNRLab will present three new studies at the 2018 Annual Meeting of the Cognitive Neuroscience Society in Boston in March. See you there!

Differences in how the brain adapts to sights and sounds could be at the root of reading disorders. Read the full story from Inside Sargent.