The Case of Tumblr

As of December 17th, the popular social networking site, Tumblr, will ban adult content. This very factor was once a driving factor to why so many gravitated to the site. Two arguments came to light during this announcement (1) that Tumblr was cracking down on pornographic content (2) that Tumblr was stripping communities like LGBTQ and artists of a safe space that enabled “self-expression, discovery and connection” (Powell, 2018) especially in terms of the networked community (Rainie and Wellman, 2012). However, what spurred the platform to change their policy, was the discovery of child pornography.

Nevertheless, as the debate rages on, it highlights an important profit-driven side of the technological world. Tumblr was taken off the app store because of their adult content, will they be back in stock after this ban? App-solutely. The corporate leaders, like Apple, have a huge say in what content can be distributed (Romano, 2018). 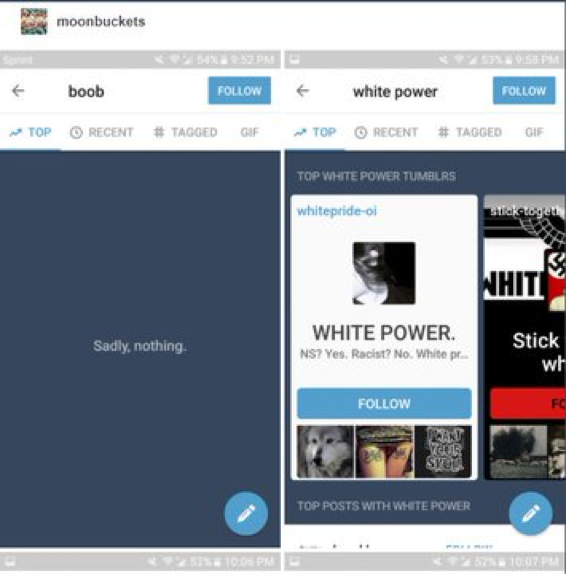 Tumblr put out an announcement that further details that Tumblr is “relying on automated tools to identify adult content and humans to help train and keep our systems in check.” This type of algorithmic censorship, is prone to go through a purge, taking out posts that are in no way related to this ban. If Tumblr plans on wiping out this large part of the content on their site, will they also censor equally graphic if not more, sentiment such as Nazi sympathizers and white supremacists? How come this form of censorship can be applied to the human body but when it comes to violent bodies of thought it can’t because they are within their limits of freedom of expression (Heins, 1993)?  Big questions to think about.

Powell, Jessica (2018). “The Problem with Banning Pornography on Tumblr: The decision has taken away an essential platform for some women and members of the LGBTQ community” Opinion: The New York Times https://www.nytimes.com/2018/12/06/opinion/tumblr-adult-content-pornography-ban.html