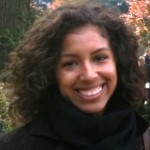 Rachel Tolano is a Jan and Warren Adelson Fellow in American Art at Boston University’s Department of History of Art & Architecture. She received her M.A. from BU and her B.A. from Stanford University. She is currently working on her dissertation prospectus about representations of Frederick Douglass in U.S. visual culture, 1865-1895. Tolano also recently curated an exhibition at the BU Art Gallery on the artist Herbert Gentry.

Herbert Gentry (1919- 2003) was an American expressionist painter who spent his career in both the United States and Europe, operating out of home bases in Paris, Scandinavia and New York. While serving in World War II, Gentry became enchanted by French café culture and proclaimed Paris a city of “great exchanges.” After moving to Paris and enrolling in art school, Gentry found that café culture provided a community for peripatetic artists of all nationalities. In addition to his semi-figural abstract artistic style, Gentry used his passion for jazz to connect with fellow artists, as he believed the two art forms were closely related. In 1949 Gentry founded the club-gallery Chez Honey in Montparnasse. Both a jazz music venue and an art gallery, Chez Honey was especially welcoming to expatriates and the black diaspora. Prominent musicians such as the drummer Kenny Clarke and saxophonist James Moody, both of whom had played alongside Miles Davis at the Paris Festival International de Jazz in May of 1949, would visit Chez Honey and participate in jam sessions. As Gentry’s 1949 painting Chez Honey demonstrates clearly, jazz and other elements of Gentry’s social circumstances manifested themselves in Gentry’s expressive and dynamic paintings.