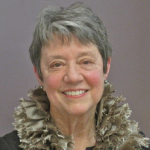 Judith Tick, the Matthews Distinguished University Professor Emerita of Music History at Northeastern University in Boston, has published award-winning books and articles about American music and Women’s History in Music. She is currently writing a biography of Ella Fitzgerald for W. W. Norton, Inc., a project for which she received an NEH ‘We the People’ fellowship in 2011.  Tick was elected to the American Academy of Arts and Sciences in 2004 and a permanent research endowment was established in her honor by the Society for American Music – the premiere professional organization in her areas of greatest interest.

At a little-known concert from Berlin (West Germany) in 1968, the great jazz artist Ella Fitzgerald communicated many complex cultural and political messages through her brilliant interpretations of American popular songs. The evening at the Deutschlandhalle was broadcast on German television but never commercially released. Now, YouTube uploads have made this concert available and this will be used by Prof. Tick to present a historically informed and biographically grounded case study of African American musical practices in tandem with social change through Fitzgerald’s stunning ten-minute improvisation on ‘I Can’t Stop Loving You‘.

“Soulsville,” she announces, readying her audience for her subversive version of Ray Charles’s megahit. Through ‘signifying’ or satirizing the lyrics, quoting other songs – Aretha Franklin’s ‘Respect‘ floats by – and simulating a gospel trance for autobiographical word-play, Fitzgerald makes a proto-feminist statement on gender relations. Improvisation subverts the retro-lyrics offering ‘to live in misery of the lonesome kind‘: how ‘in sync’ Fitzgerald proves herself to be with 1968, a year of revolution in Europe and the United States.

Fitzgerald made two recordings of this song but nothing matched this Berlin moment, prescient with identity politics made memorable through the risky business of jazz freedom.